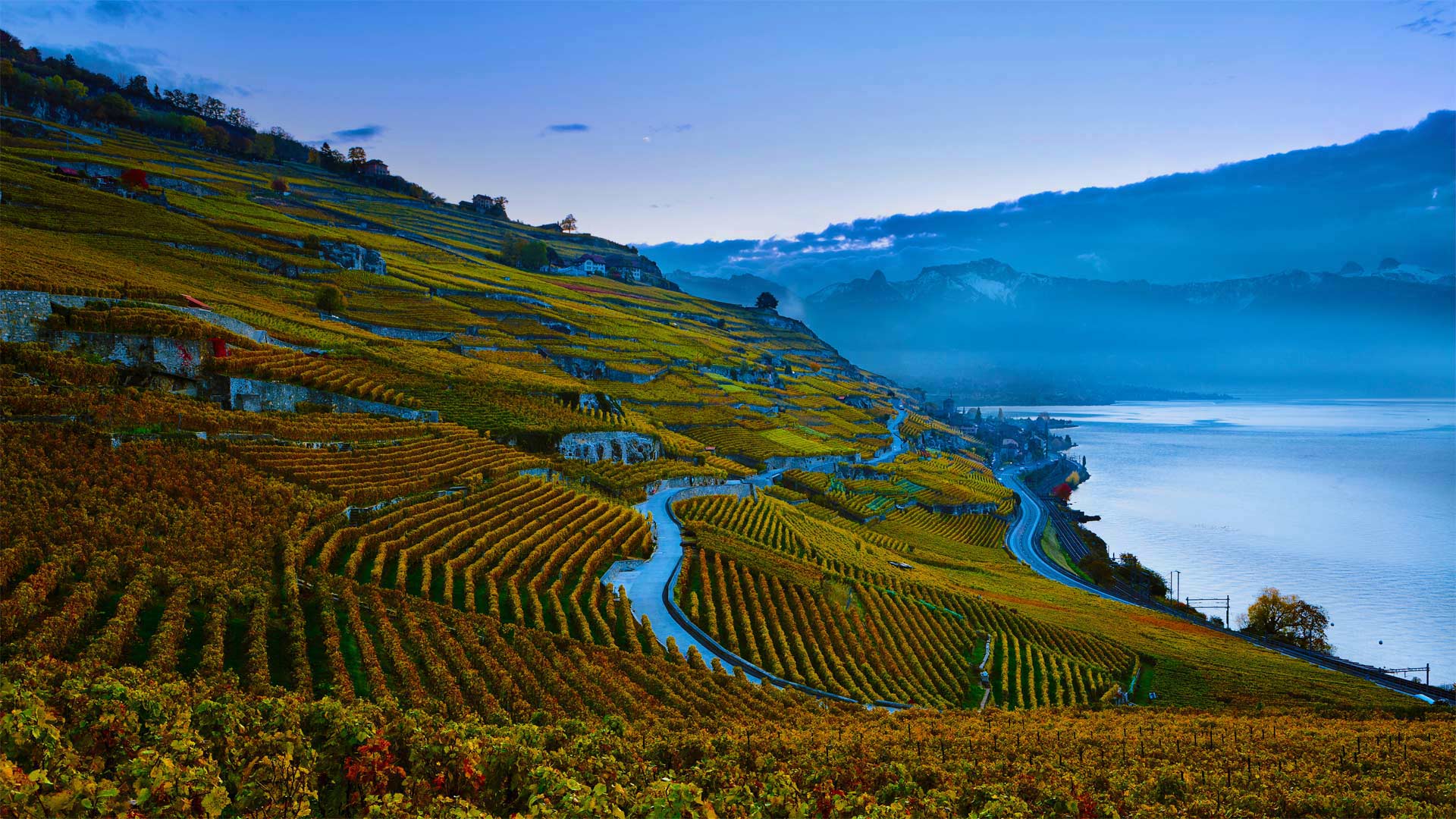 A crush in Lavaux

The 'crush season,' aka the grape harvest, has arrived in these picturesque Swiss vineyards. The steeply terraced vineyards of the Lavaux region along Lake Geneva's northern shore produce grapes for some of the best wine in the country. The vine terraces can be traced back to the 11th century, when Benedictine and Cistercian monasteries controlled the area. A UNESCO World Heritage Site since 2007, Lavaux is the largest contiguous vineyard region in Switzerland. It's known for producing Chasselas wine, a full, dry, and fruity white wine that's considered the ideal pairing for Swiss raclette cheese. We'll toast to that! 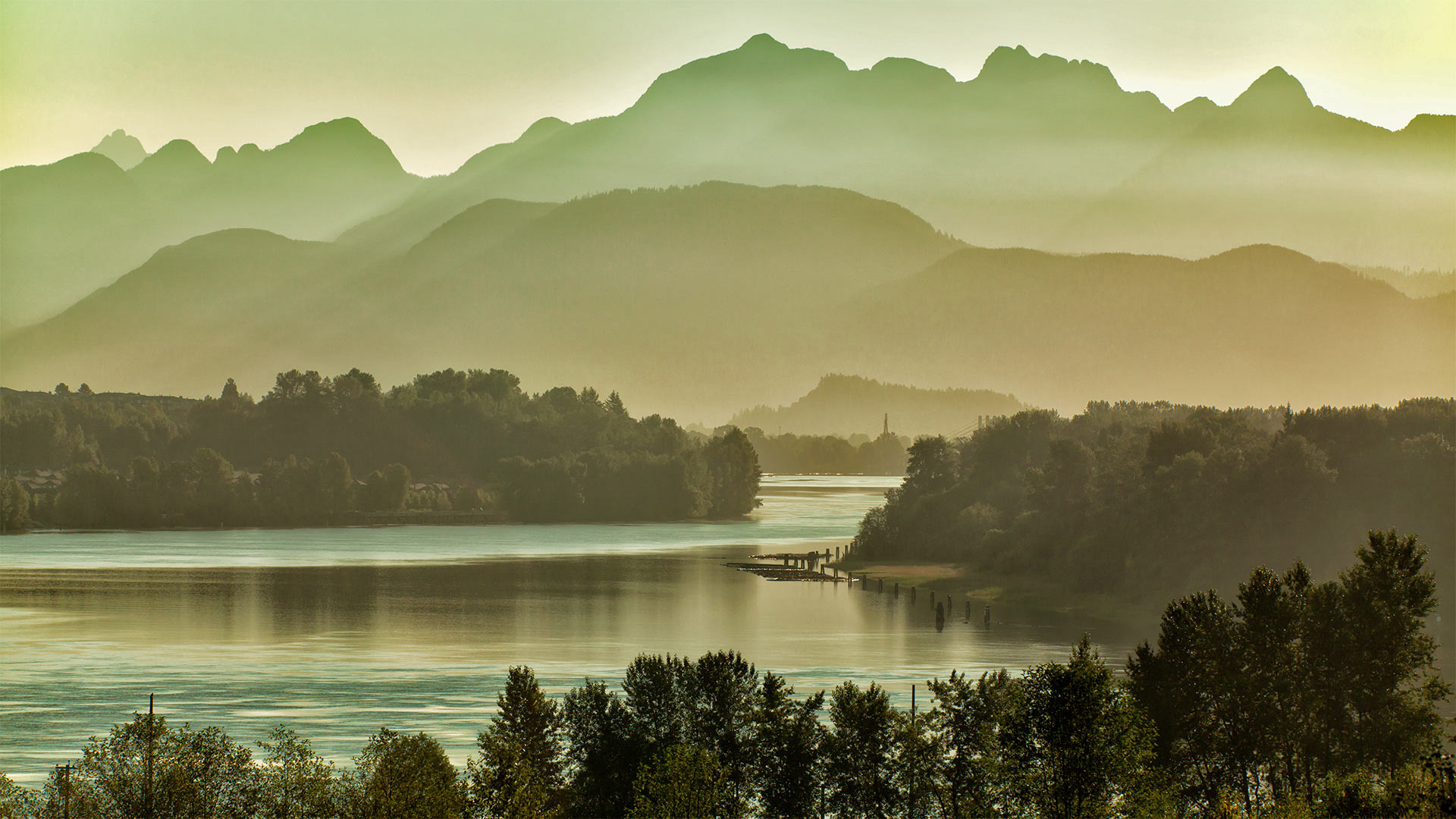 Take me to the river

Today we're recognizing World Rivers Day—a conservation event that branched off in 2005 from its source, BC Rivers Day, founded near this British Columbia river's banks 40 years ago today. The Fraser River flows through a showcase of this Canadian province's diverse landscape: It originates in the Rocky Mountains, carves steep valleys through central BC, and irrigates rich farmlands outside Vancouver before spilling into the sea just south of the city. The river flows gently in this stretch, as seen from the span of the Port Mann Bridge east of Vancouver, with the Golden Ears mountains in the background. Thanks to preservation efforts, the Fraser's main stem remains completely undammed, with its drainage basin covering 25 percent of BC's land area.

A drainage basin is what we in the US usually call a watershed: Every river has tributaries, or other rivers and springs that flow into it and add to its volume. A river's watershed is the area covered by the main flow and all its tributaries put together. Watersheds may exist within other watersheds, such as when a tributary is longer than the river it feeds—a classic example is North America's longest river, the Missouri, whose vast watershed is a subdivision of the sea-bound yet shorter Mississippi's.

Delicate environments like rivers are interconnected, and actions have downstream effects—that's what World Rivers Day aims to highlight through hands-on cleanup opportunities and virtual events. Scroll down to search what's currently planned in your area. 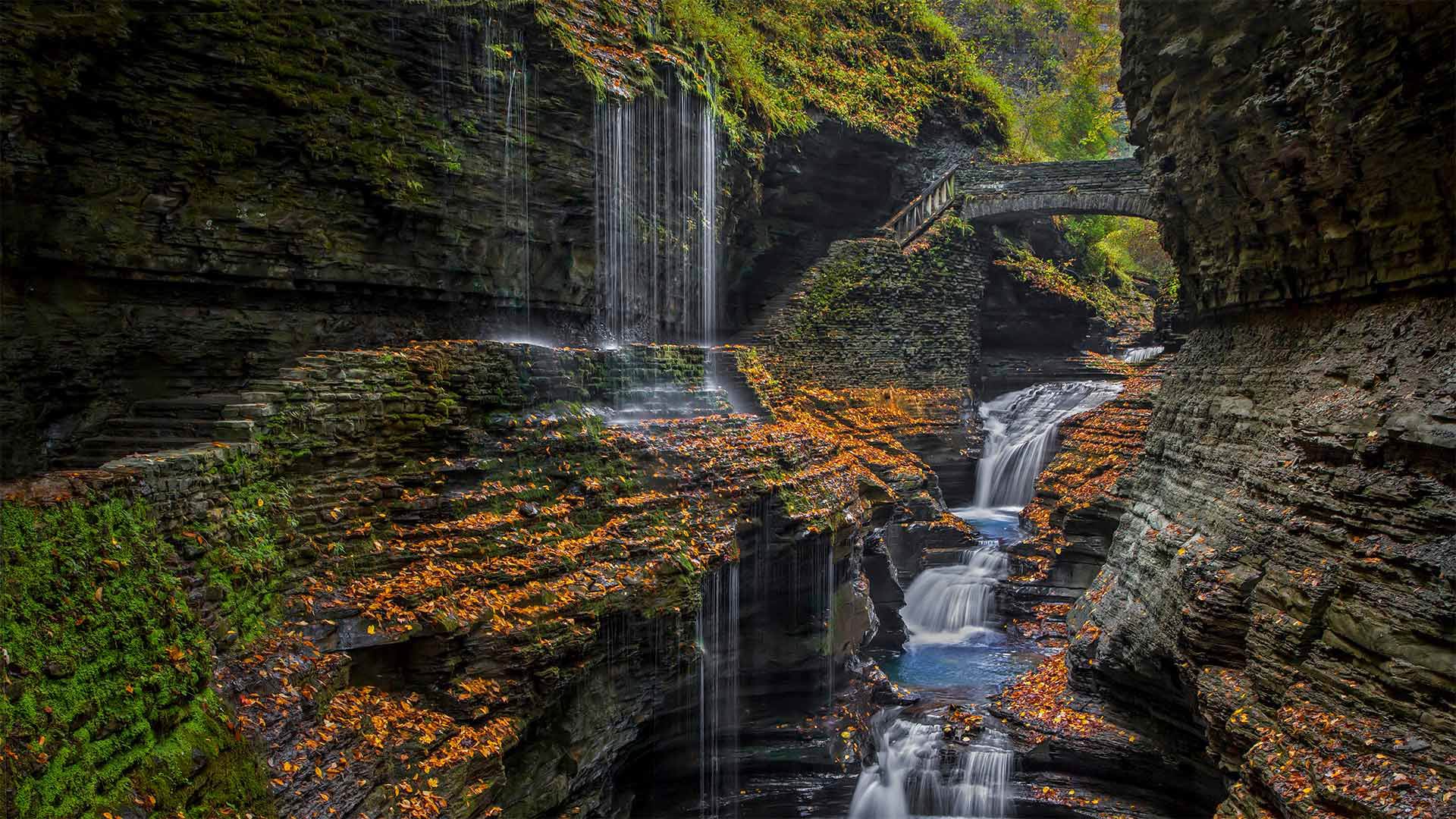 When we talk about celebrating public lands, the images that pop into our heads are generally icons of the famous national parks out West. Old Faithful, El Capitan, the Arches. Our photo for National Public Lands Day, instead highlights the relatively unsung beauty of the more than 10,000 state parks dotting the nation from coast to coast.

Watkins Glen State Park, just south of Seneca Lake in upstate New York, is centered around a trail that descends with this rushing stream through picturesque cliffs, passing over and under 19 waterfalls. Sure, it's not Niagara Falls (which is part of the same New York State Parks system and is the oldest state park in the US). But especially in the crisp northeastern autumn, this stepped gorge is a tranquil showcase of the rugged landscape surrounding the glacially carved Finger Lakes region.

According to the National Park Service, National Public Lands Day is the largest volunteer event in the US, with opportunities to help with conservation and maintenance from city parks to national forests. But if you'd rather keep your distance, relax, and enjoy the public spaces we all share, most state and national parks are waiving their entrance fees for the day. Happy trails! 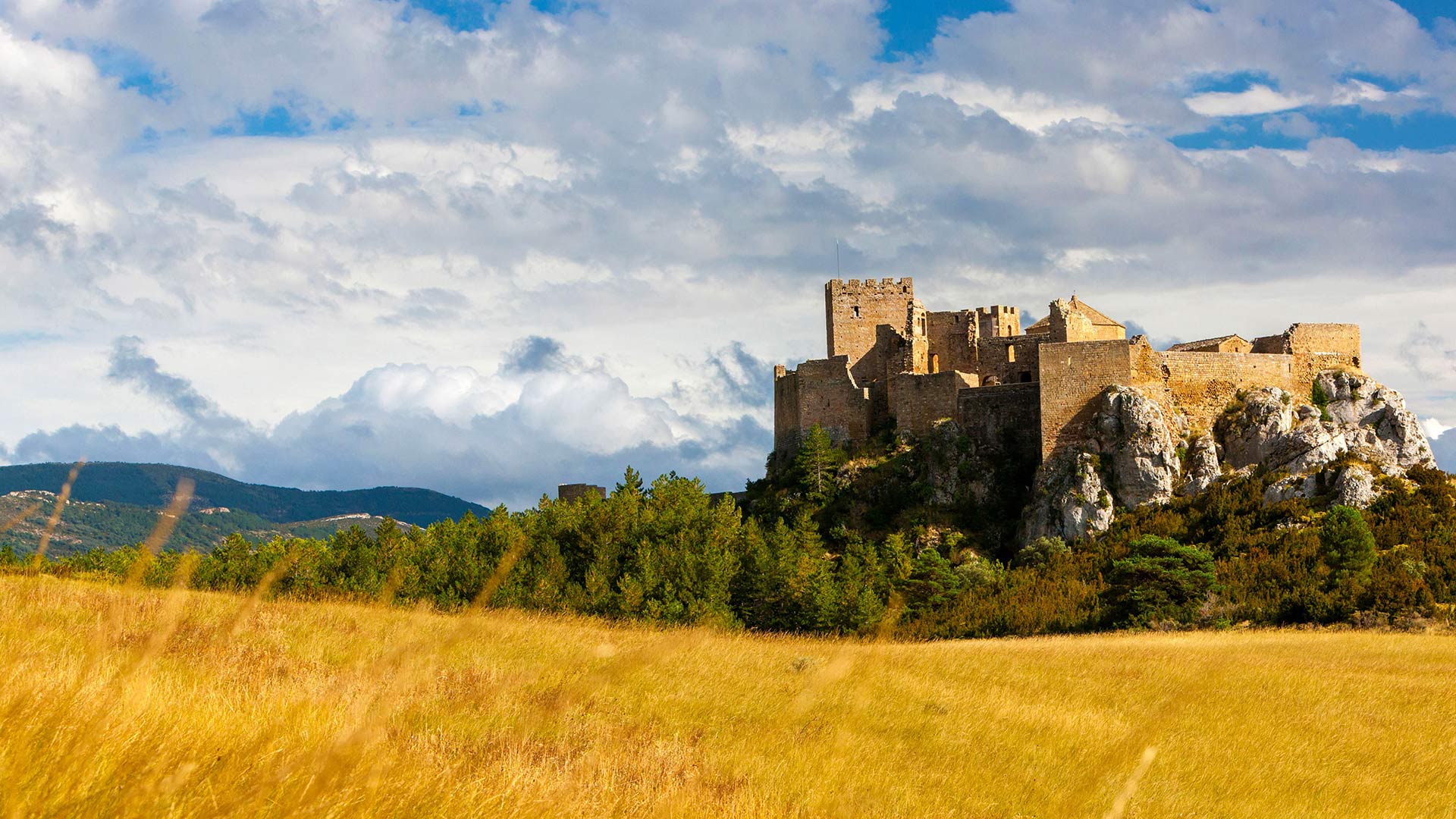 The castle of Loarre we show you today is a Romanesque jewel that has remained suspended in time for almost a thousand years near the Spanish side of Pyrenees mountain range. It was built by king of Navarre Sancho ‘the Great’ in the 11th century and there’s no other equal or better preserved fortress of that style in all of Europe.

Once finished, in 1070, it became an unbreakable bastion that played a crucial role in the “Reconquest” of the Aragonese territories occupied during the Arab invasion three centuries before, since it was in the battle frontline and mounted on a rocky hill that made it impregnable. From there Sancho’s grandson troops took back the city of Huesca and managed to advance near Zaragoza. And once the battleground had moved further in the south, the castle became a monastery, was expanded two times and surrounded finally by an outer wall to protect the population settled at its feet.

Today, Loarre is a protected national monument that can also be visited. And actually 100,000 people do it every year. If you like epic cinema, you will surely recognize this place, as it has served as stage in several films, like for instance 2005’s “Kingdom of Heaven” directed by Ridley Scott. 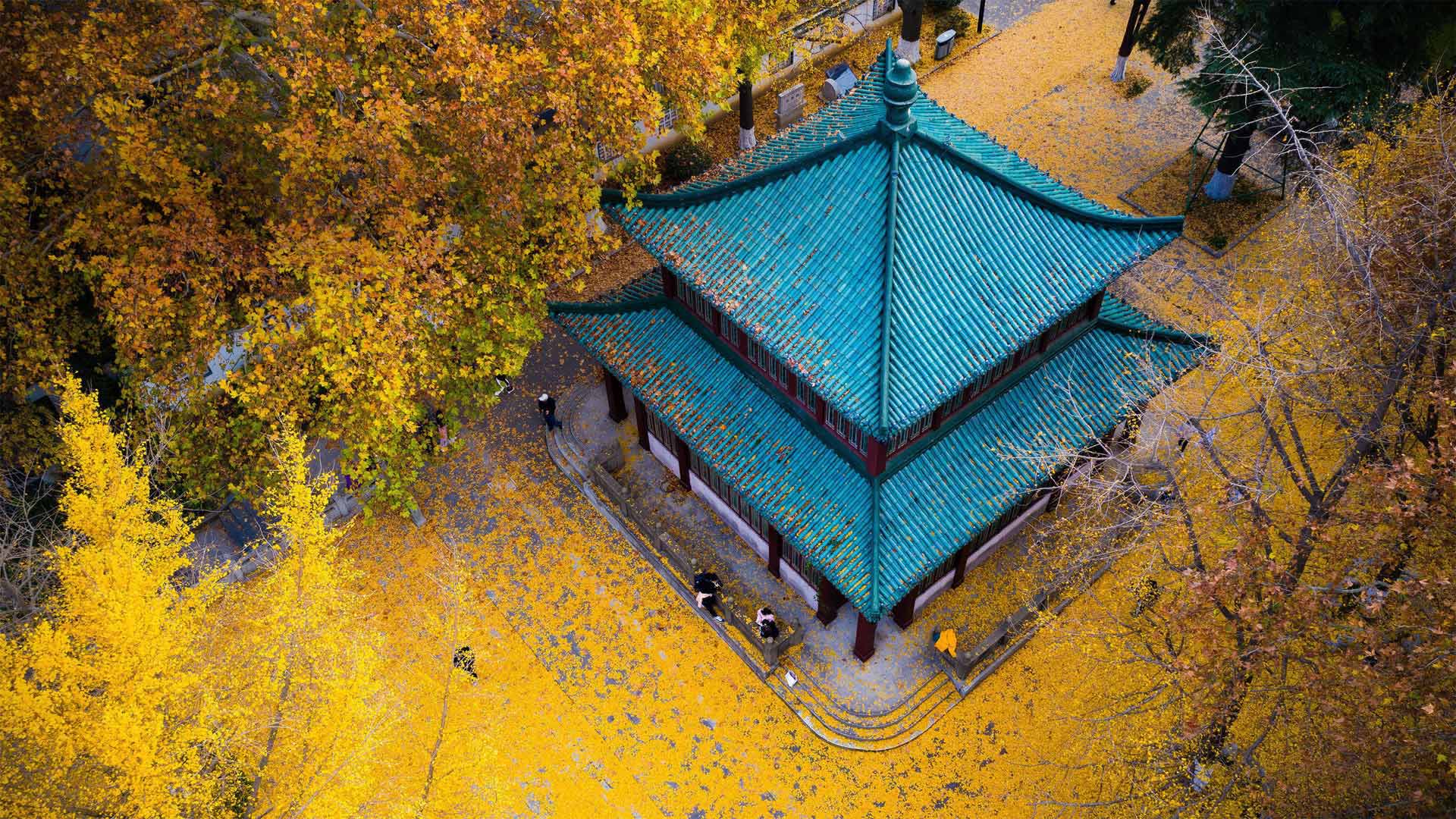 A tree of many memories

As autumn takes hold in China, a blanket of fan-shaped golden leaves—like this one at Xuanwu Lake Park in Nanjing—becomes a familiar sight. And it's been that way for longer than anyone can remember, thanks to a native tree with a lineage going back eons, the ginkgo.

Even though most medical experts say it's no special boon to the brain, maybe Ginkgo biloba is touted as a memory enhancer for a reason—after all, many Chinese ginkgoes are known to be at least 1,400 years old. The order they belong to, Ginkgoales, is 270 million years old—meaning the sole remaining member species, Ginkgo biloba, survived the extinction event that killed the dinosaurs. Ginkgo biloba originated in China, but has been cultivated all over the world for centuries as a food source, medicinal plant, and splendid symbol of resilience. 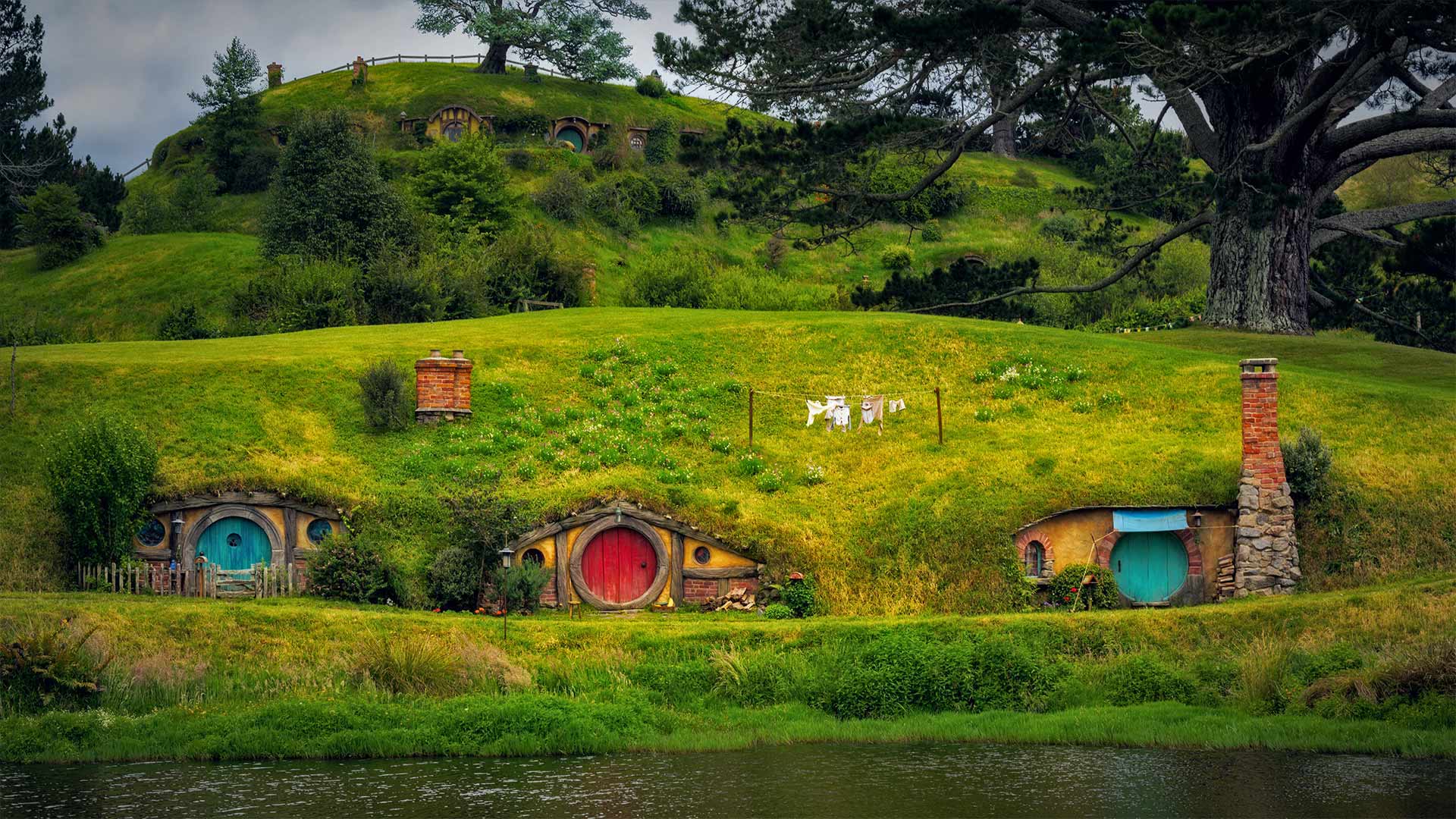 Today is Hobbit Day, marking the anniversary of the 'Long-expected Party,' which sets in motion the 'Lord of the Rings' book series. September 22 is the birthday of both Bilbo and Frodo Baggins, the protagonists of 'The Hobbit' and 'The Lord of the Rings' respectively.

Fans of the film adaptations of those stories will have no problem identifying today's image as Hobbiton in the Shire (though it is actually a set built in the countryside near Matamata on New Zealand's North Island.) You can celebrate Hobbit Day by walking around barefoot all day and having seven meals like a hobbit, or just by watching (or re-watching) any or all of the six films in the series. It's would be only fitting this year since the stories chronical a mythological struggle between darkness and light and today is the autumnal equinox. 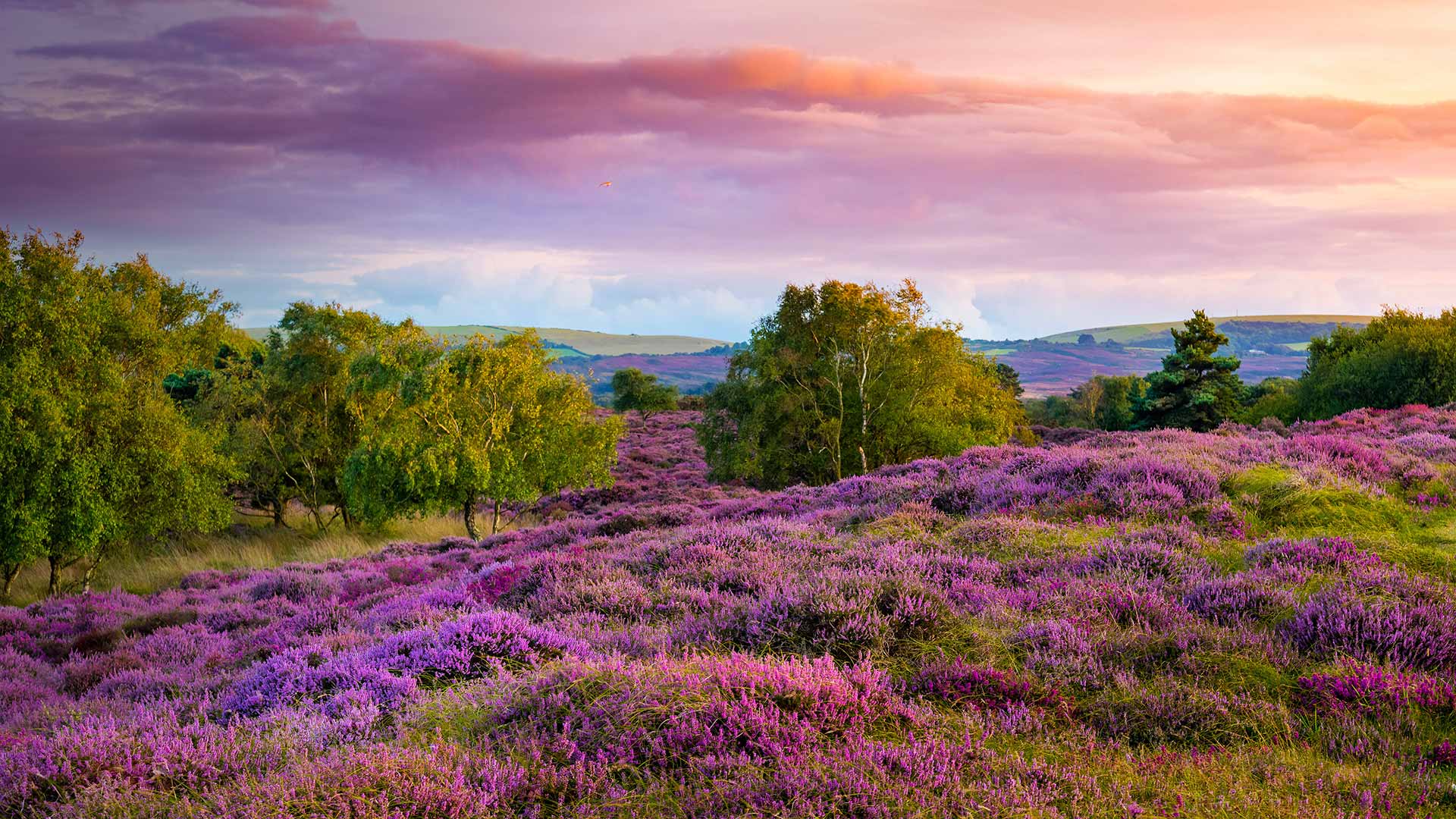 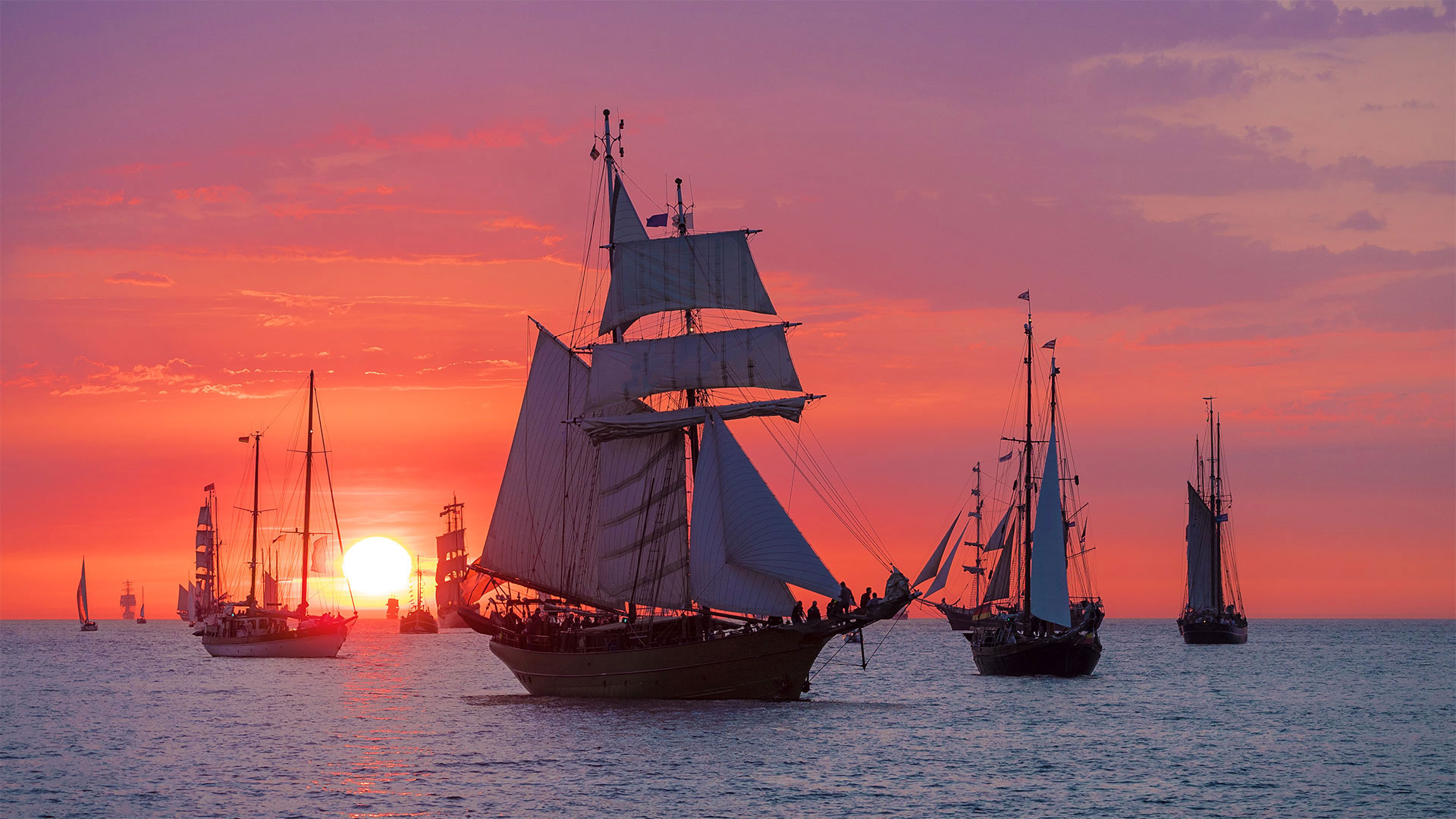 These sailboats in Warnemünde, Germany, set the scene perfectly for International Talk Like a Pirate Day. The holiday (yeah, we're calling it a holiday) was first imagined in 1995 by two Oregon residents. September 19 was chosen for the annual observance since one of them had an ex-wife whose birthday fell on that day and they figured they could remember it. A few years later, seeking widespread adoption, they pitched the idea to humor columnist Dave Barry, who wrote, 'Every now and then, some visionary individuals come along with a concept that is so original and so revolutionary that your immediate reaction is: "Those individuals should be on medication."' From there, it went viral, and these days, September 19 is celebrated internationally, with major brands and media personalities joining in the silliness. We're fans, too. Just picture us typin' this here with an eye patch, peg leg, an' pocket full o' swag doubloons. Arrr!

It's harvest season! For this occasion, we are taking you today to the Bordeaux vineyard, which many consider to be the oldest and most prestigious in the world. The influence of French wine culture in general and of the Bordeaux wine culture in particular, are largely due to the expertise of the wine-growers but also, to the rich history of the French territory, to which Bordeaux is no exception.

In Gironde, the department of Bordeaux, there are six large wine regions whose names may remind you of a few properly catered “aperitifs” or dinners. First of all, there are the Bordeaux Métropole wines, for instance those produced in the vineyards of Château Les Carmes Haut-Brion, the only vineyard with an address within the city limits. There are also the estates of Saint-Émilion, Pomerol, Fronsac, Médoc and Graves et Sauternes, then those of the Entre-Deux-Mers and Blayes and Bourg. So many names, so many flavors… 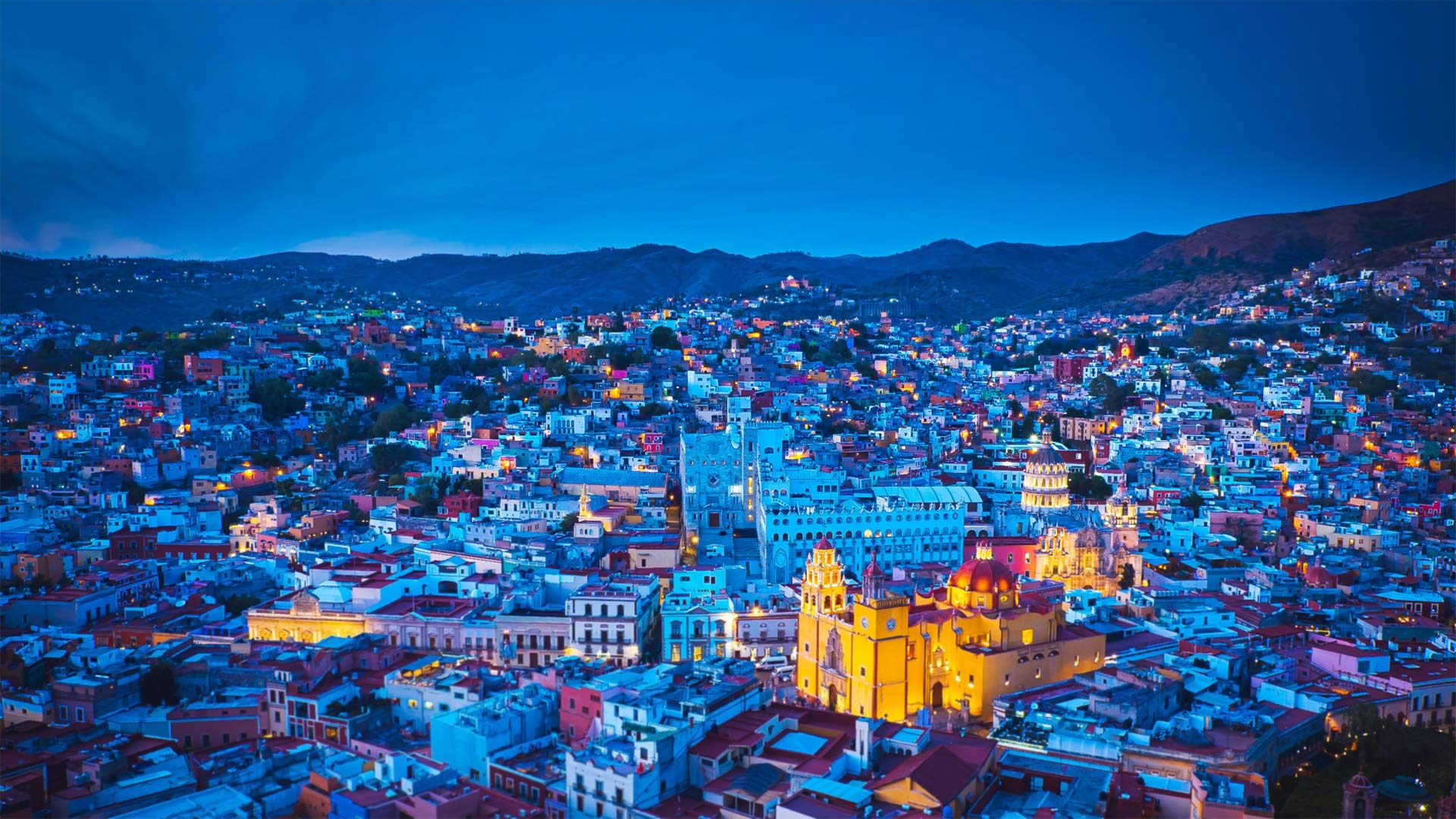 It's Independence Day in Mexico

In honor of today's Independence Day holiday in Mexico, our homepage comes from the state of Guanajuato—where the country's battle for independence first began. The conflict started with the 'Cry of Delores,' an event on September 16, 1810, when priest Miguel Hidalgo y Costilla rang the church bell in the nearby town of Delores and called for a revolt to free Mexico from Spanish control. His call to arms triggered the formation of an insurgency that marched onward to San Miguel and then to the city of Guanajuato (featured on our homepage). The ensuing conflict spanned more than a decade, culminating with Mexico finally breaking free from Spanish rule in 1821.

Since then, the 'Cry of Delores' has come to symbolize the very idea of Mexican independence. Each year on the eve of Independence Day, the president of Mexico re-enacts the call to arms from the balcony of the National Palace in Mexico City, while ringing the same bell that Hidalgo used that day on September 16, 1810.