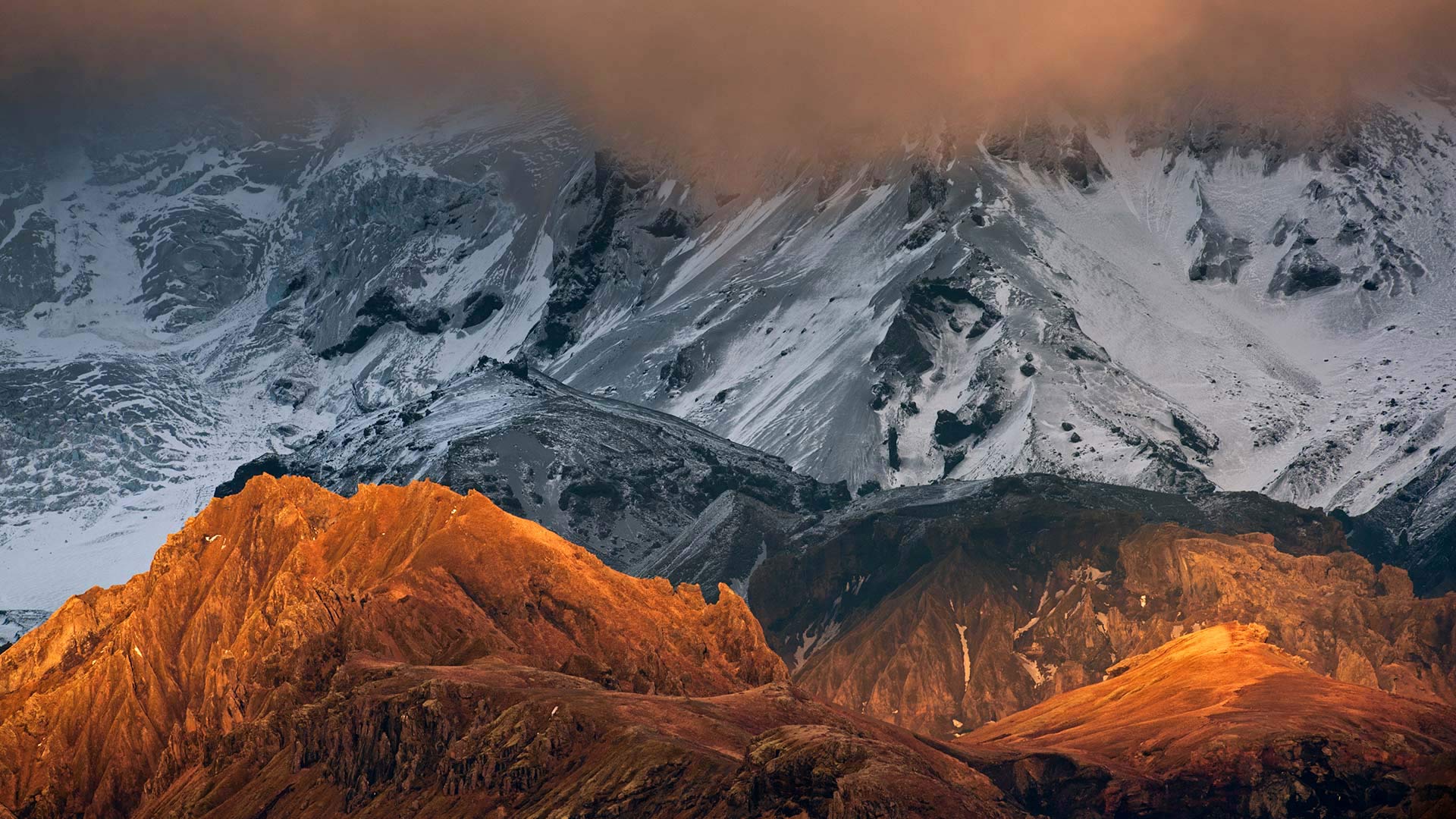 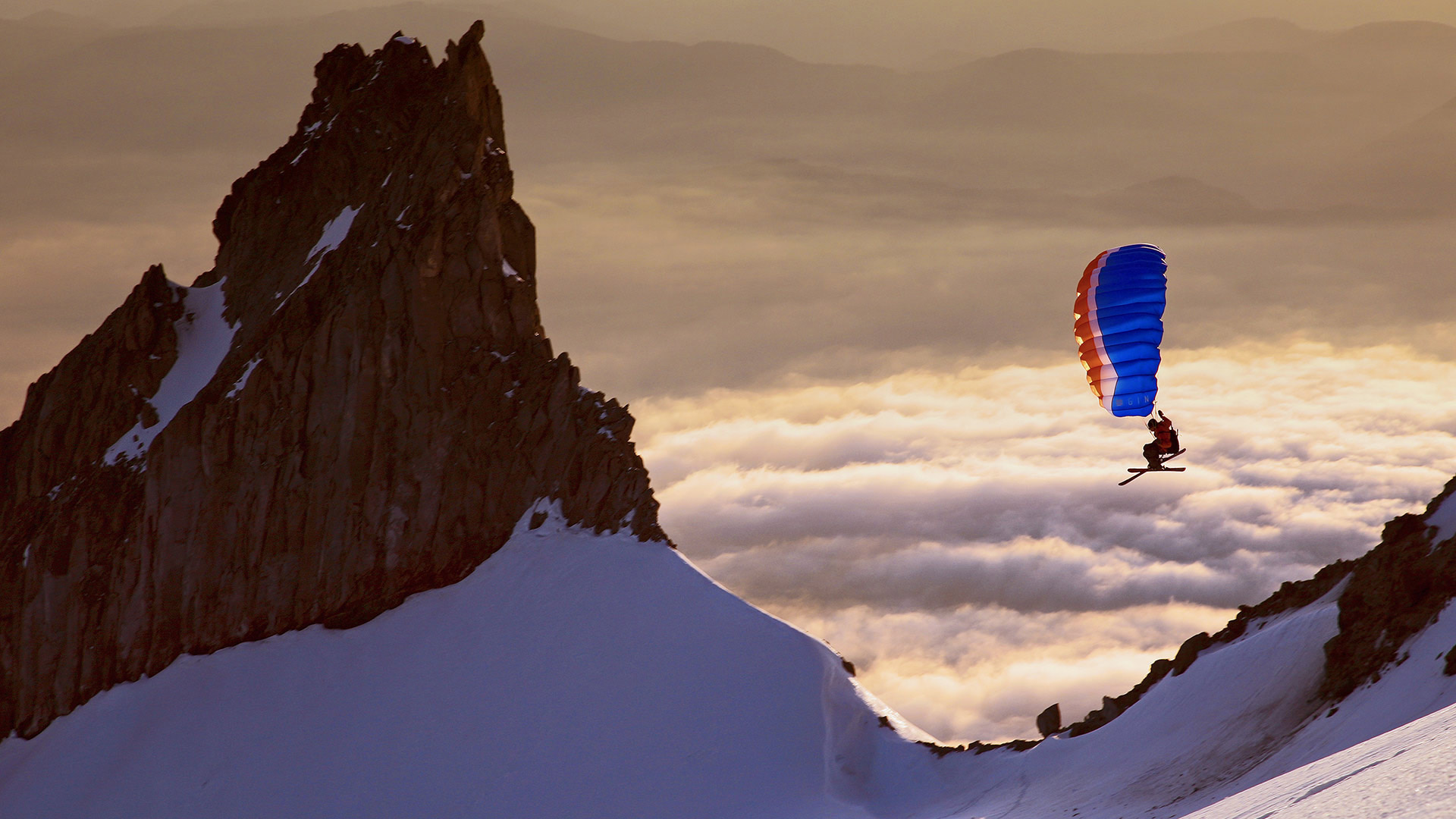 Far above the clouds, an adrenaline-seeking skier glides past the jagged Crater Rock on Oregon's Mount Hood. He's practicing a relatively young sport known as speed riding—similar to paragliding but with more emphasis on high velocity than altitude. Skiers with parachute-like 'wings' launch downslope at high speed, navigating runs partly on skis and partly in the air.

As Oregon's loftiest peak and with a year-round ski season, Mount Hood has long been a destination for pioneering winter sports enthusiasts, so a view of its snowy slopes seemed appropriate for World Snow Day. This annual celebration was initiated by the International Ski Federation in 2012 to promote sledding, skiing, snowboarding, and other frigidly fun athletics. Organizers also emphasize the health benefits and connection to nature that snow sports provide. With hundreds of wintry events slated worldwide, it's touted as 'the biggest day on snow all year.' 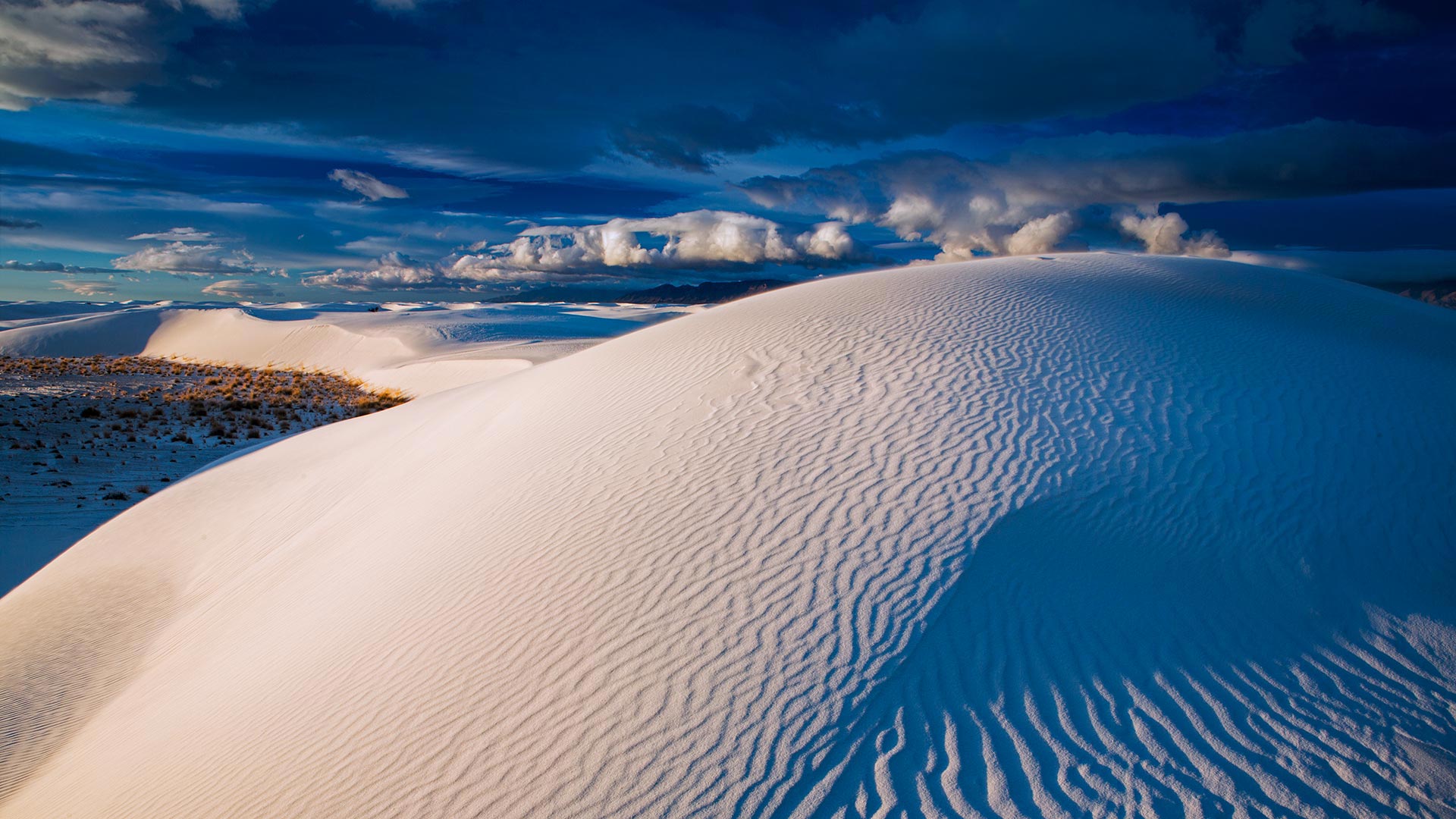 At a quick glance, you might mistake these dunes for massive snowdrifts. Although they do make for great sledding, the tiny crystals that make up White Sands National Park are not ice but gypsum, a soft mineral often used to make plaster and chalk. The dune field became a national monument on this day in 1933 with a proclamation by President Herbert Hoover, which set aside nearly 150,000 acres for preservation. Recently, on December 20, 2019, President Trump signed legislation making it the 62nd designated national park in the National Park System.

The pearly sands compose the largest gypsum dune field in the world but cover just a fraction of southern New Mexico's Tularosa Basin. This vast desert valley—more extensive than some US states at 6,500 square miles—is mostly occupied by White Sands Missile Range. The active military installation—the US's largest by area—surrounds the national park and includes the Trinity site, where the first atomic bomb was detonated in 1945. That event altered the course of humanity's future, but the White Sands region is also defined by echoes from our very distant past: recently, scientists have used radar technology to zero in on prehistoric human, mammoth, and giant sloth footprints buried long ago beneath the shifting sands. 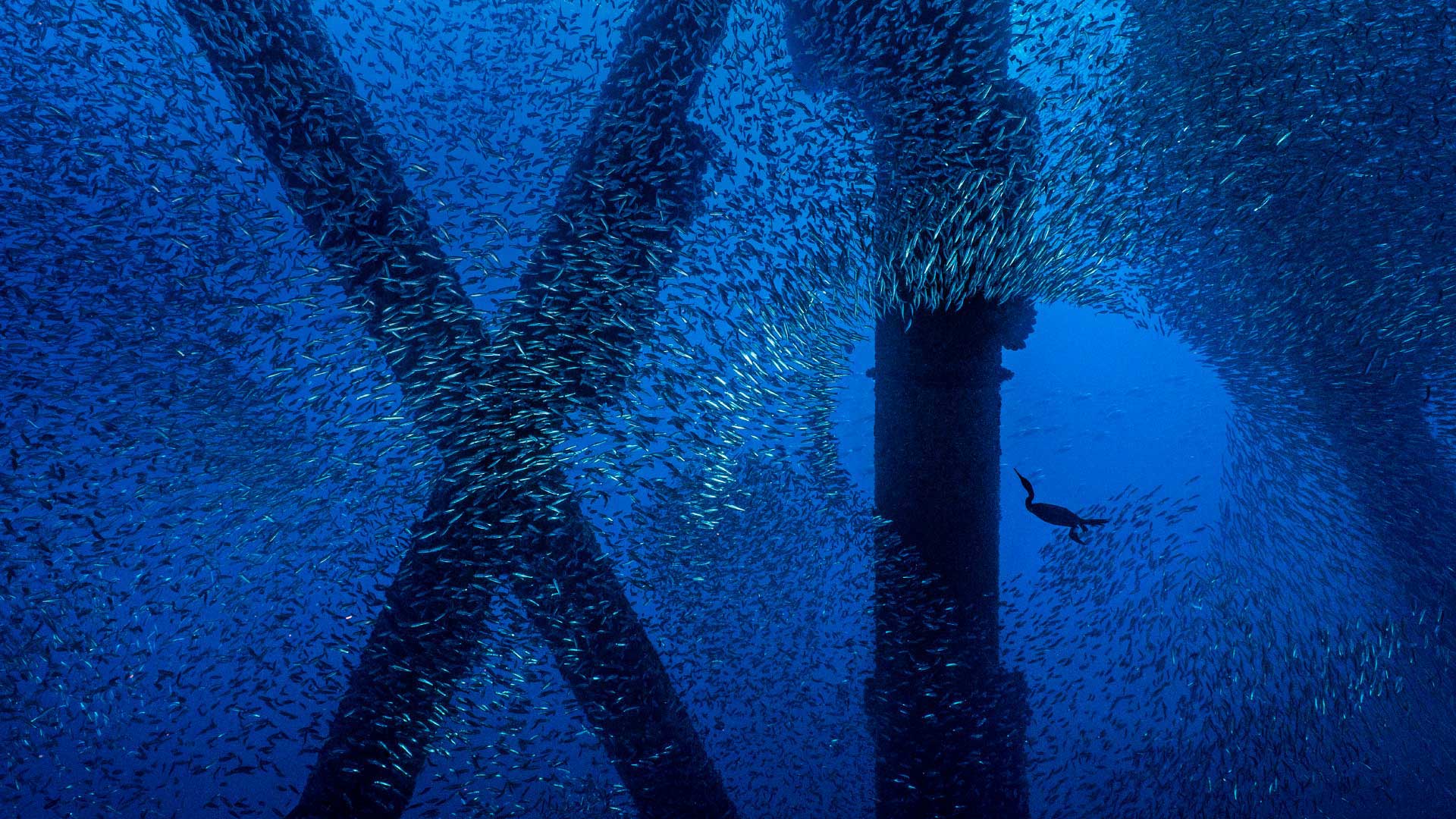 一只勃兰特鸬鹚在洛杉矶海岸石油钻塔下的一群太平洋鲭鱼中觅食，加利福尼亚 A Brandt's cormorant hunts for a meal in a school of Pacific mackerel beneath an oil rig off the coast of Los Angeles, California (© Alex Mustard/Minden Pictures)

A seabird gets 'schooled'

This deep-diving Brandt's cormorant appears to be on the hunt for a meal, and there's plenty of Pacific mackerel to choose from here off the coast of Los Angeles, California. While seabirds like the cormorant are a threat to these fish, the mackerel aren't exactly defenseless. Fish have many unique means of defense, such as traveling in dense schools like this one. It's a technique that not only allows for speedy travel (because it reduces friction on most of the fish in the school)—schooling also makes it more difficult for predators to pick out an individual victim. For these fish, there's safety in numbers. But when all else fails, they can take some advice from Dory in 'Finding Nemo'—'Just keep swimming, just keep swimming.' 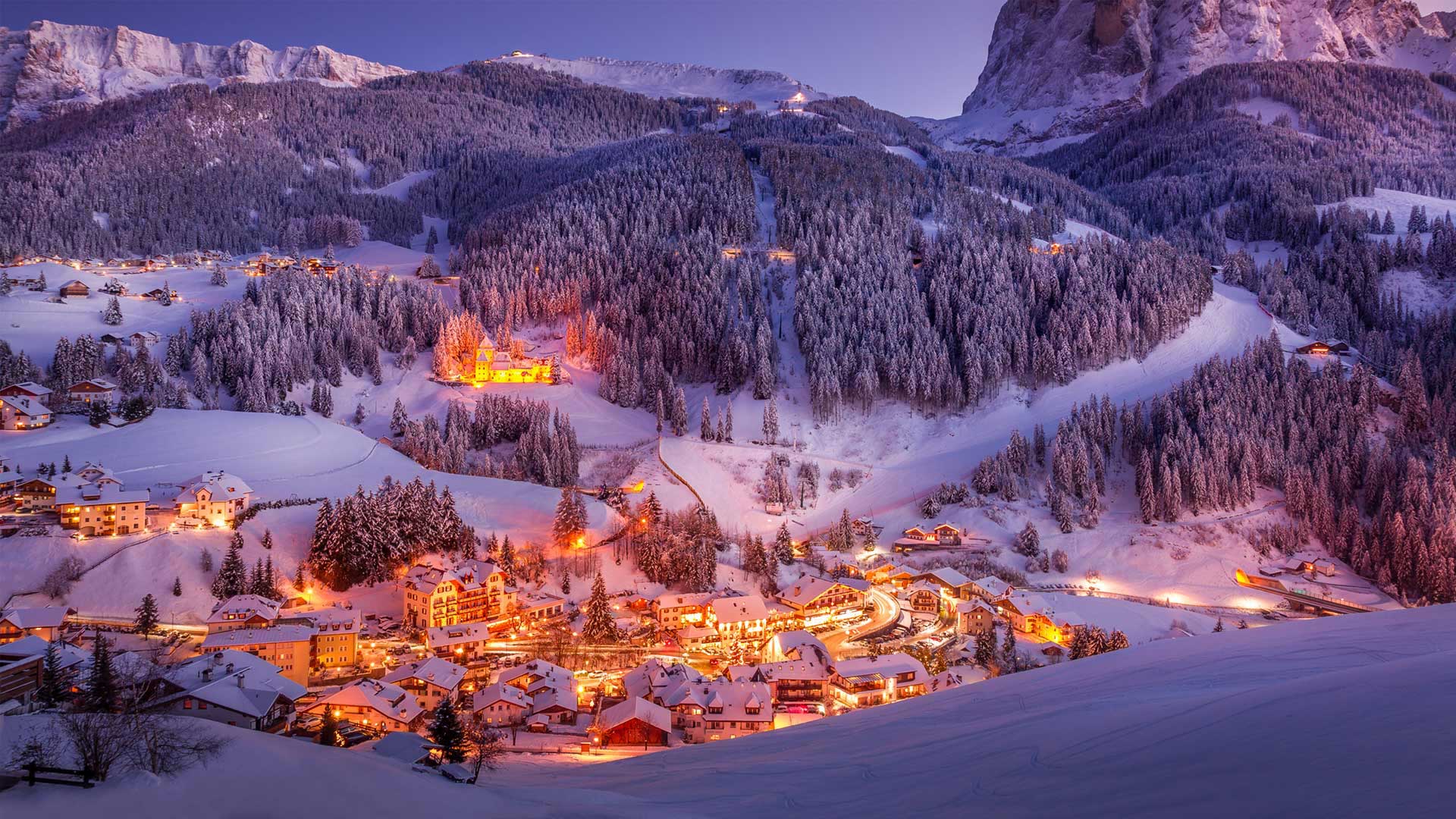 In the valley of the doll

Today we're featuring a picture-postcard view of Val Gardena, a valley nestled in Dolomites in the South Tyrol region of Italy. This time of year, the remote area may be a bit busier than usual as skiers are drawn to its famous slopes. In summer, it's known for other outdoor activities, such as rock climbing and hiking. Since the 17th century, the villagers have been famed for their woodcarving. Artisans create everything from simple, utilitarian items, like wood bowls, to finely detailed figurines. One of the woodcarvers' biggest hits? A wooden peg doll that was popular across Europe and the US during the 19th century. 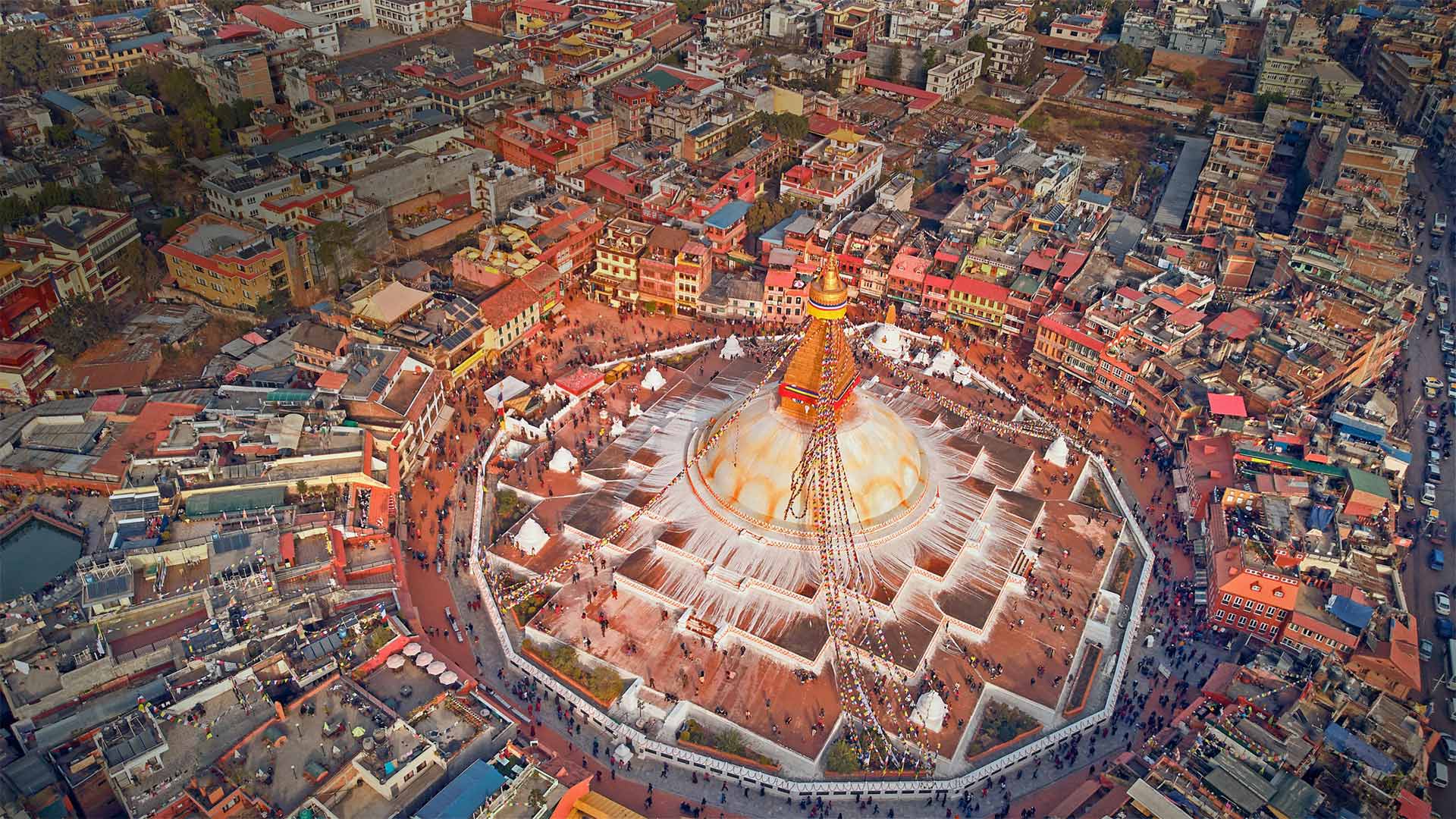 Today we're in Kathmandu, Nepal, where the Boudhanath stupa stands out against the skyline. A UNESCO World Heritage site, the stupa is on the ancient trade route from Tibet—traders have rested and offered prayers here for centuries. Like all stupas, Boudhanath is a mound-like structure containing relics. It was first built sometime after the 600s, when Buddhism was first spreading through Tibet and Nepal. It's long been a major pilgrimage site for Buddhists, and is said to entomb the remains of Kassapa Buddha, one of the 29 named ancient Buddhas.

Today, many locals in Kathmandu and across Nepal are celebrating Maghe Sankranti, the harvest festival that marks the beginning of the month of Magh and the start of warmer weather. It's similar to the winter solstice celebrated by other cultures. Typically, people observe the holiday at home with their families. But this holiday is also when many Hindus worship the sun god by taking ritual baths in nearby rivers and eating special festive foods like yams and sweet dough balls called 'laddus.' 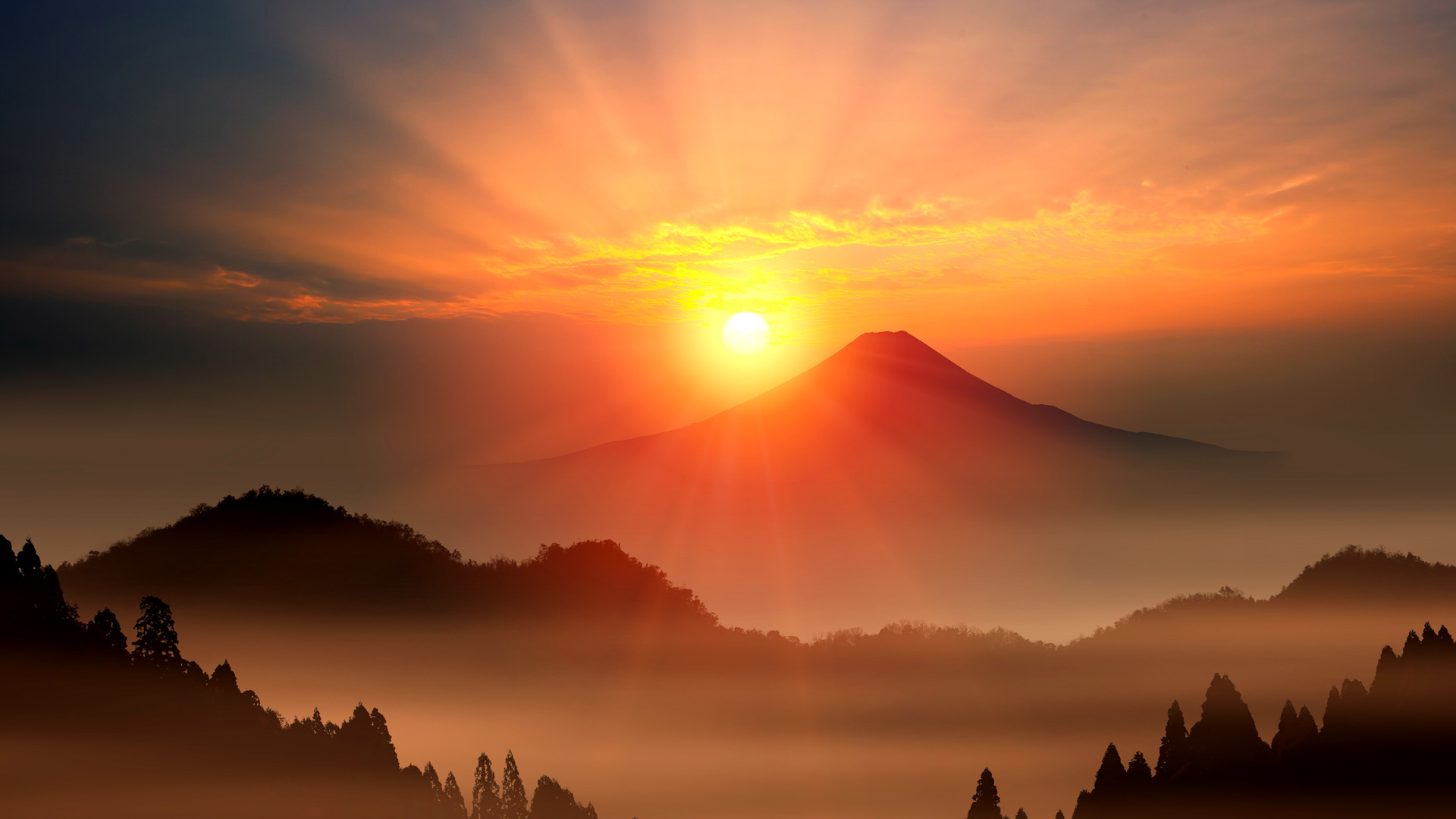 By the way, the sunrise on New Year's Day is called "first sunrise" or "coming light", but these two are slightly different. "First sunrise" was the subject of religion, based on the legend that the new god descends with the first sunrise. "Gokumitsu" is originally a Buddhist term. It refers to worshiping the sunrise at the top of a high mountain and is actually a summer term. 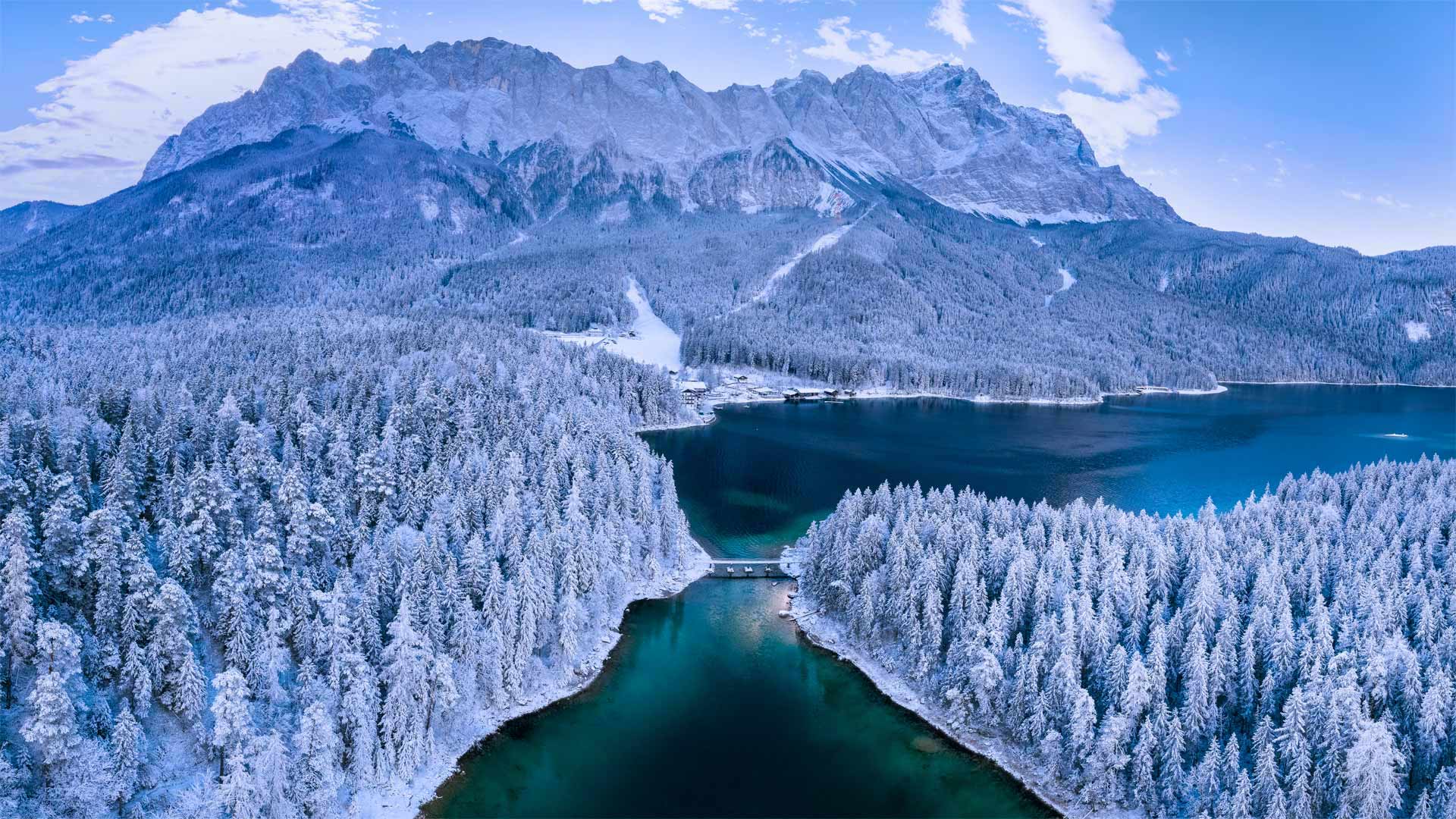 Welcome to the snowy Bavarian Alps, where the mountain called the Zugspitze (TSOOG-shpit-seh) casts a cold shadow over the Eibsee, a small and serene alpine lake. Situated on the border with Austria, the peak is Germany's highest point at almost 10,000 feet above sea level, towering over the lakeside village of Grainau.

The word 'zug' means 'train' in modern German. Though the peak's name is much older than the locomotive (and probably refers to 'zugbahnen,' deep tracks cut into the mountainside by avalanches), it's especially appropriate now: a steep cogwheel railway tunnels up from the nearby town of Garmisch-Partenkirchen to a plateau near the summit. Aerial trams also serve the mountaintop from both the German and Austrian sides, and the one from Grainau boasts the longest free span for a cable car in the world, at about two miles. 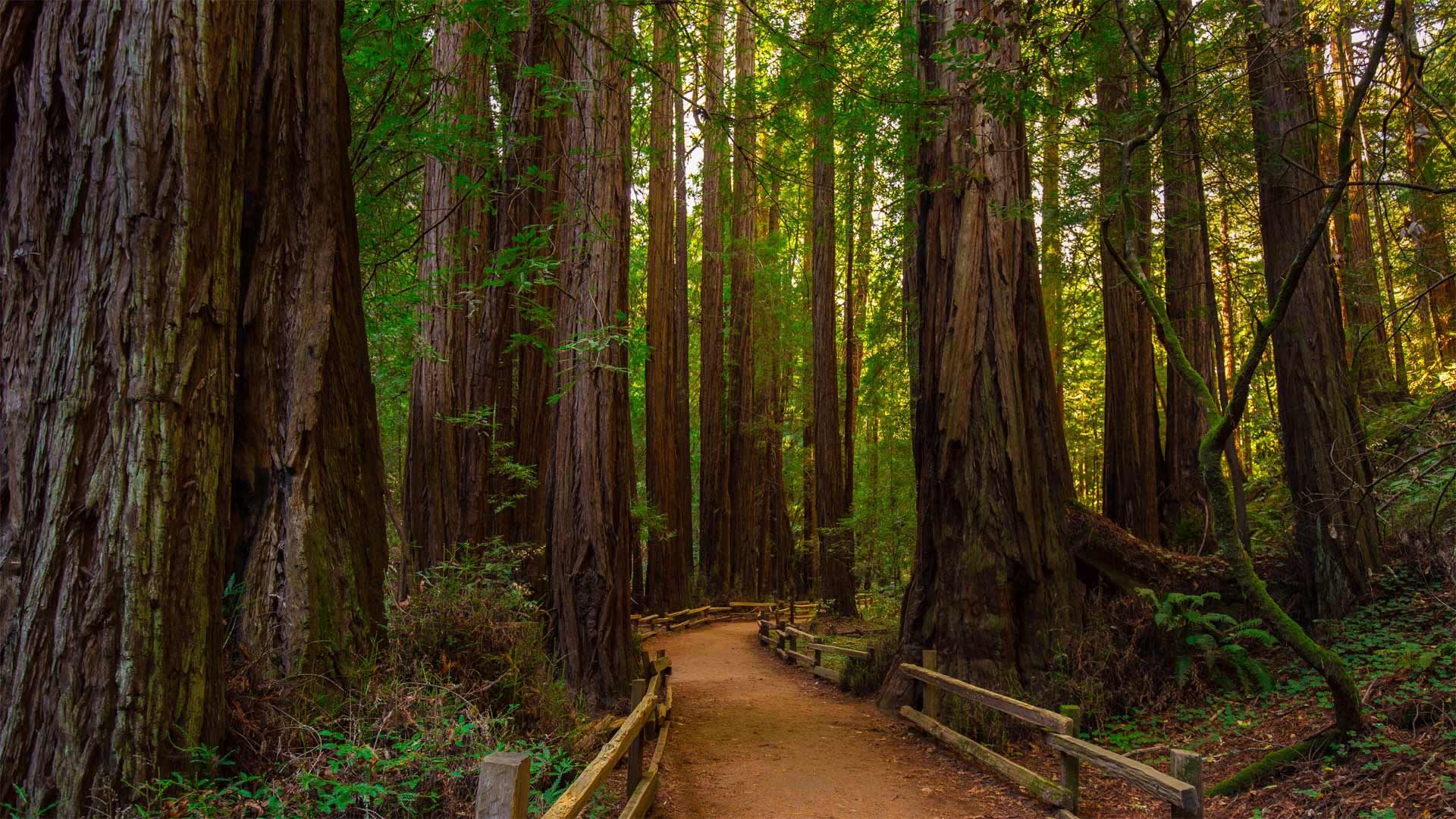 On this day in 1908, President Theodore Roosevelt declared 554 acres in Marin County, California, a national monument. William and Elizabeth Kent, who donated the land, insisted the monument be named after naturalist John Muir, the environmentalist known as the 'father of the national parks.' Part of the Golden Gate National Recreation Area, Muir Woods is best known for its old-growth coastal redwood forests, which make up more than half its land. The redwoods in the monument are 600-800 years old, on average, with the oldest being at least 1,200. The tallest tree is about 258 feet, though further north redwoods grow as high as 379 feet. Redwoods are an important part of the forest ecosystem. They absorb and 'strip' moisture from fog, which then drips into the ground, supporting the trees as well as other forest life. 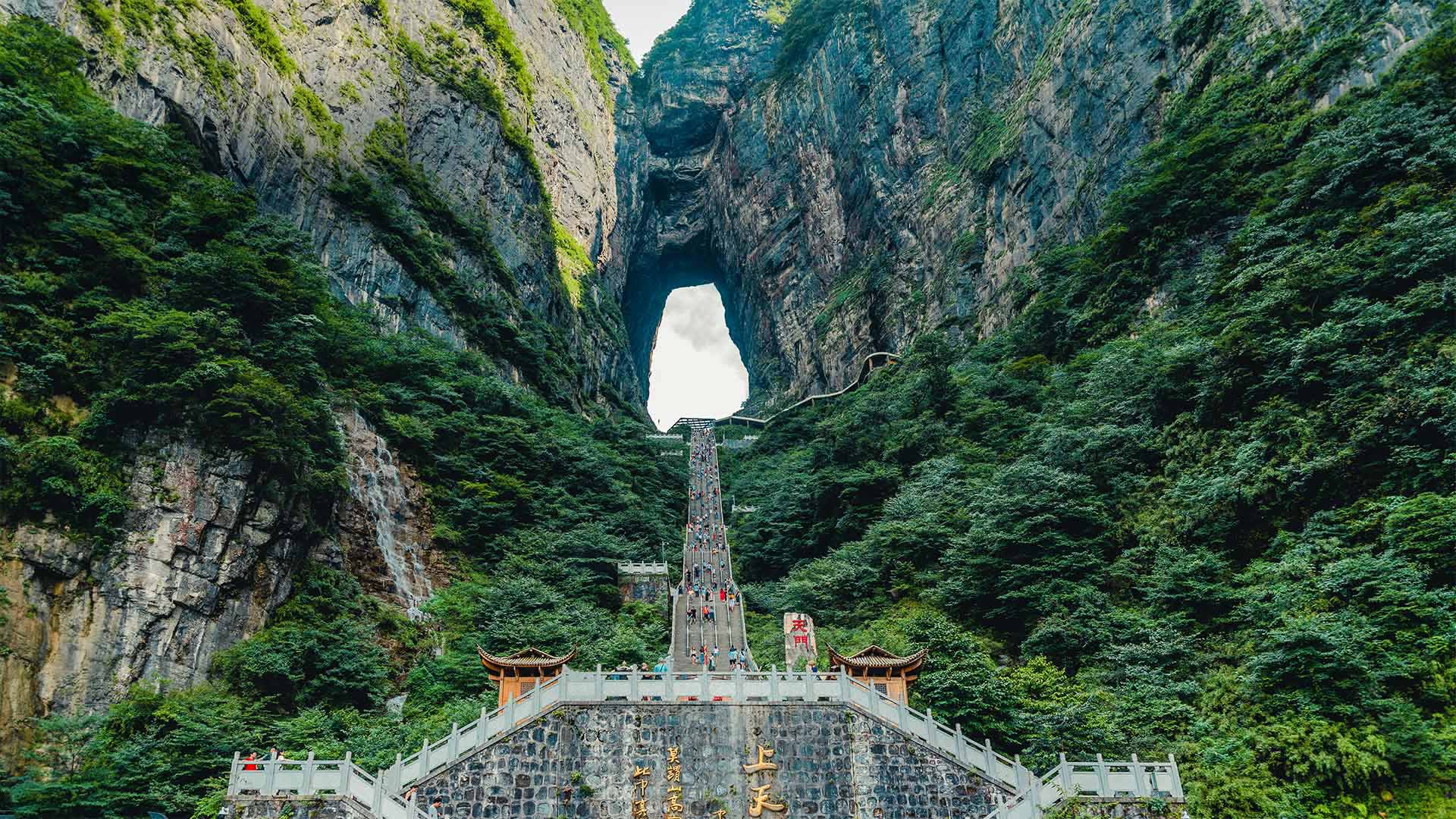 If you want to celebrate Take the Stairs Day in style, look no further than China's Tianmen Mountain (literally Heaven's Door). About 5,000 feet above sea level, the hole in the mountain is the highest naturally formed arch in the world. Originally a cave, it became an arch in 263 AD when the backside of the mountain collapsed, creating the dramatic opening we see today. You'll have to climb 999 steps to make it to the top, but we promise the view is worth it.