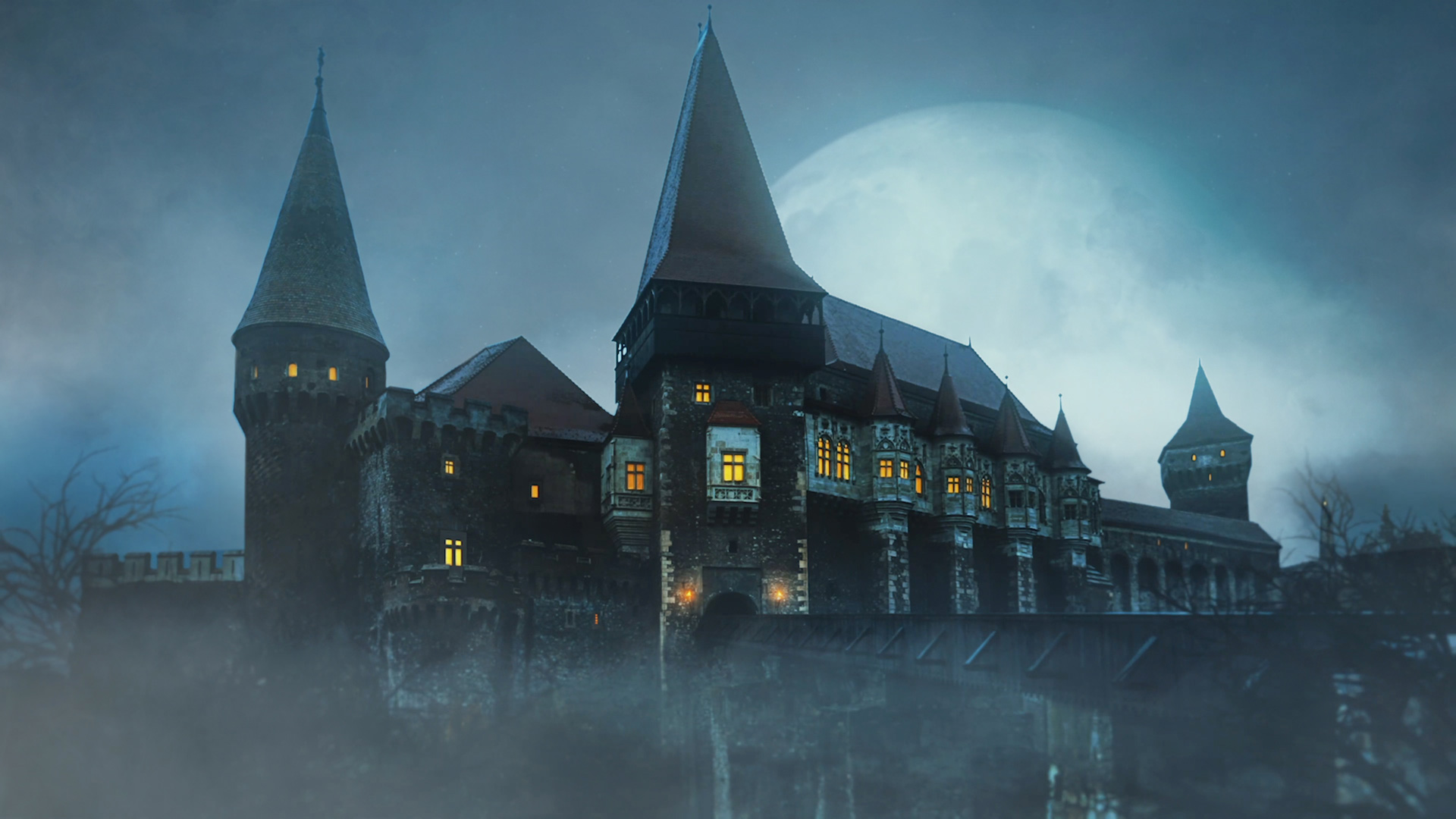 Happy Halloween boos and ghouls! We hope our vampire wasn't too scary on this day designed for spooky delights. The fortress in our image is Corvin Castle in Romania—not far from Transylvania, a real historical region in Romania. In Bram Stoker's novel 'Dracula' the ghoulish count lives in a remote Transylvanian castle, cementing the place in popular imagination as the home of Count Dracula. Be careful out there tonight as you go haunting for treats, and keep reminding yourself: There's no such thing as vampires… 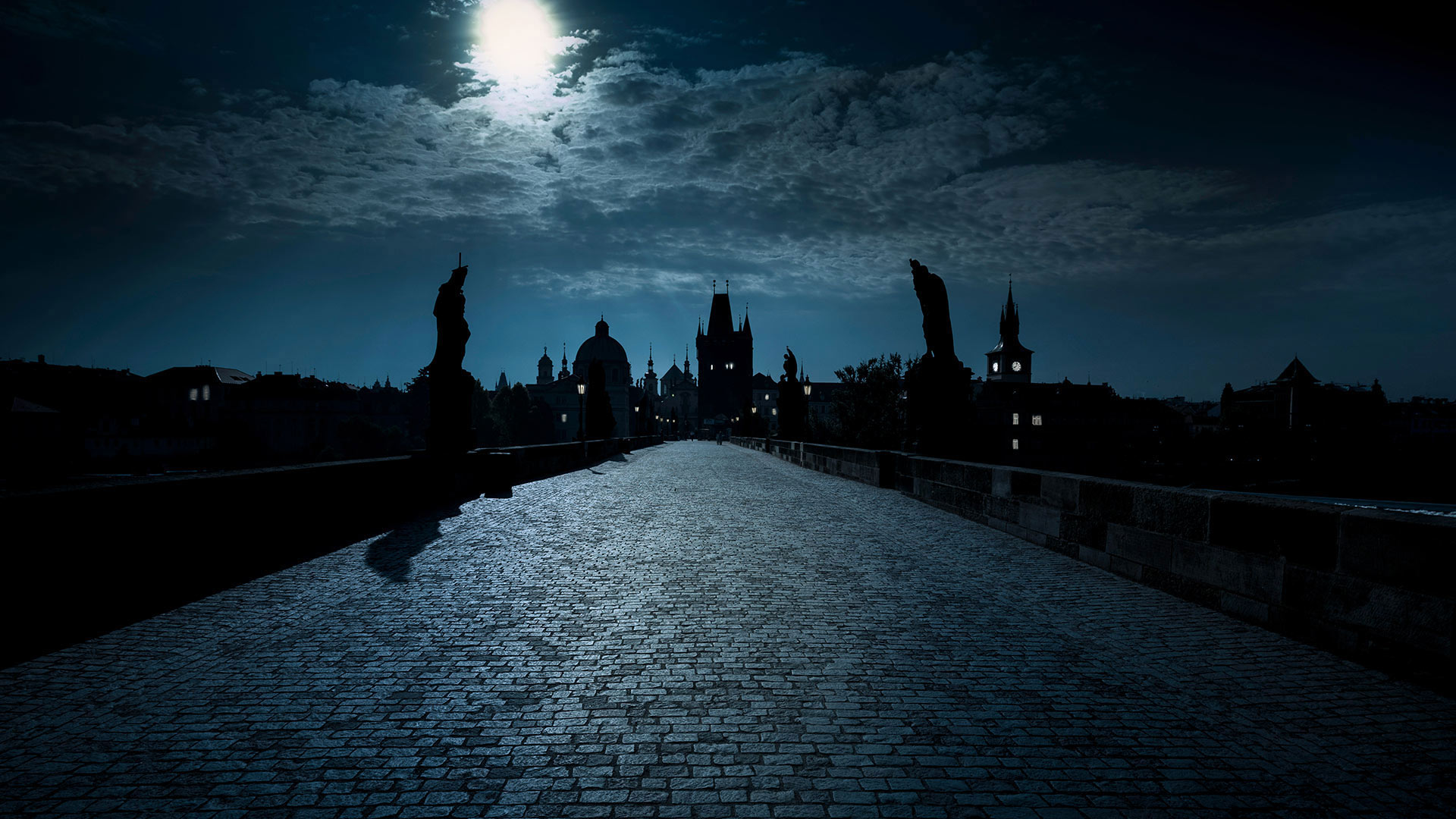 Cross this bridge if you dare

Superstition abounds on the Charles Bridge, dating back to its construction in 1357. Builders laid the original bridge stone on July 9 at exactly 5:31 AM, coinciding with a precise set of numbers—the palindrome 135797531—which was believed to bring additional strength to the structure. But the superstition didn't stop there. The bridge was also constructed in perfect alignment with the tomb of St. Vitus and the setting sun on the equinox. A more recent superstition involves the statue of the revered Saint John of Nepomuk that stands on the bridge—according to folklore, rubbing the plaque at the base of the statue will grant you a wish. Throughout history, the legendary bridge has undergone a multitude of catastrophes, from fighting to flooding. These days, however, it's one of Prague's most visited sites. Whether that's because of its superstitious strength or not—that's up to you to decide. 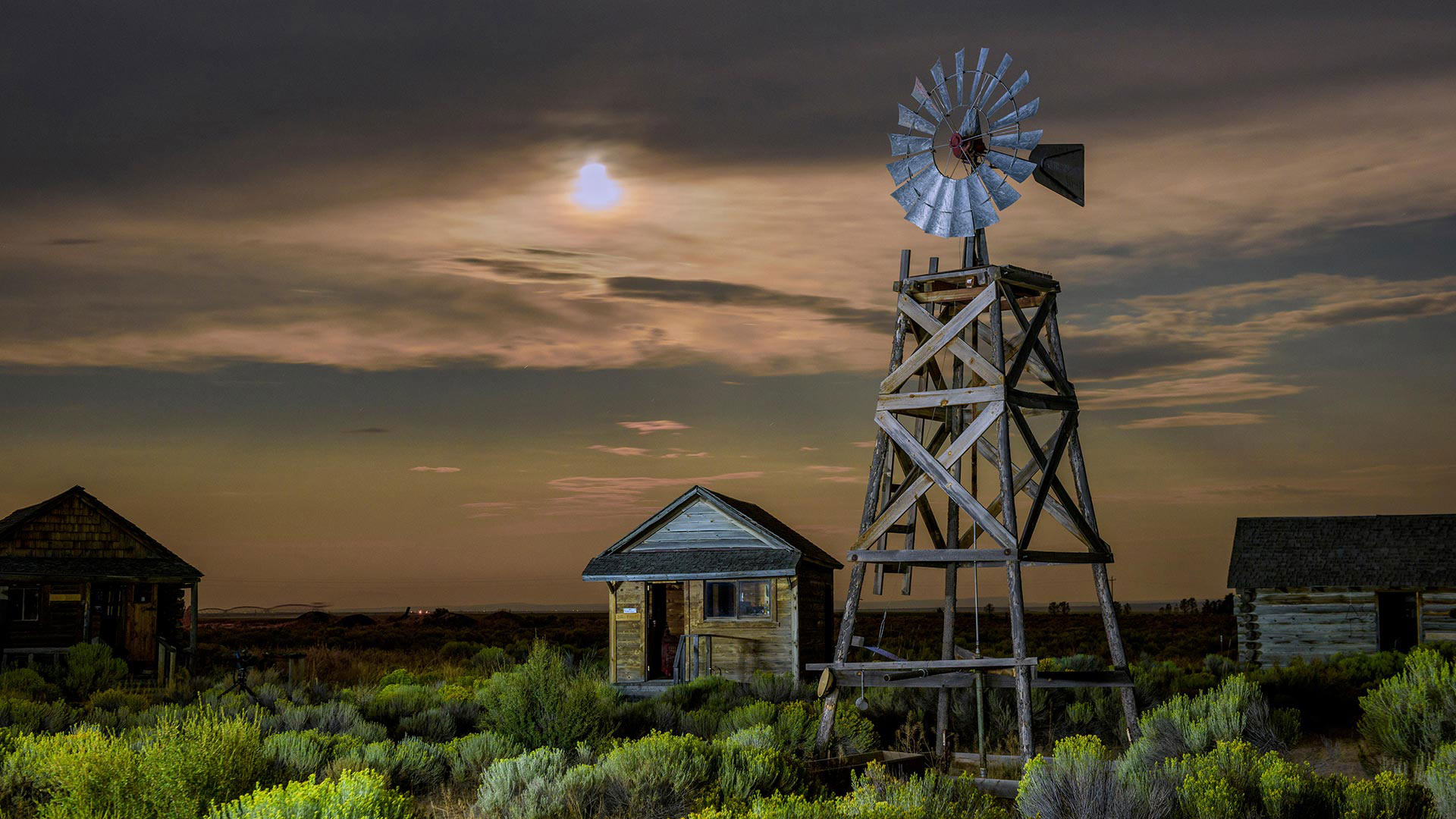 A night on the (ghost) town

The spooky scene here might look like someplace you'd want to avoid, but it's not likely to scare you—not too much anyway. It's the Fort Rock Valley Historical Homestead Museum in central Oregon—a collection of abandoned homestead-era buildings from the area. In the late 19th and early 20th century, people acquired federal lands around here for farms and ranches via the Homestead Acts. But most left within a few years due to the hot, dry summers and extremely cold winters. Today, the buildings are assembled as a ghost town and contain items from that period, including furniture, dishes, and tools. There's also a nearby cemetery which, according to local lore, is haunted by the ghost of rancher and author Reub Long riding his horse.

You can find ghost towns scattered around the country, the dilapidated remains of towns whose populations grew quickly and then dwindled. Many of them, like Rhyolite, Nevada, and Bodie, California, were gold (or silver or coal) mining towns that declined once the profits dried up. Others, like Cahawba, Alabama, died due to floods or other natural disasters. They may not all be haunted, but they sure can give off a spooky vibe. 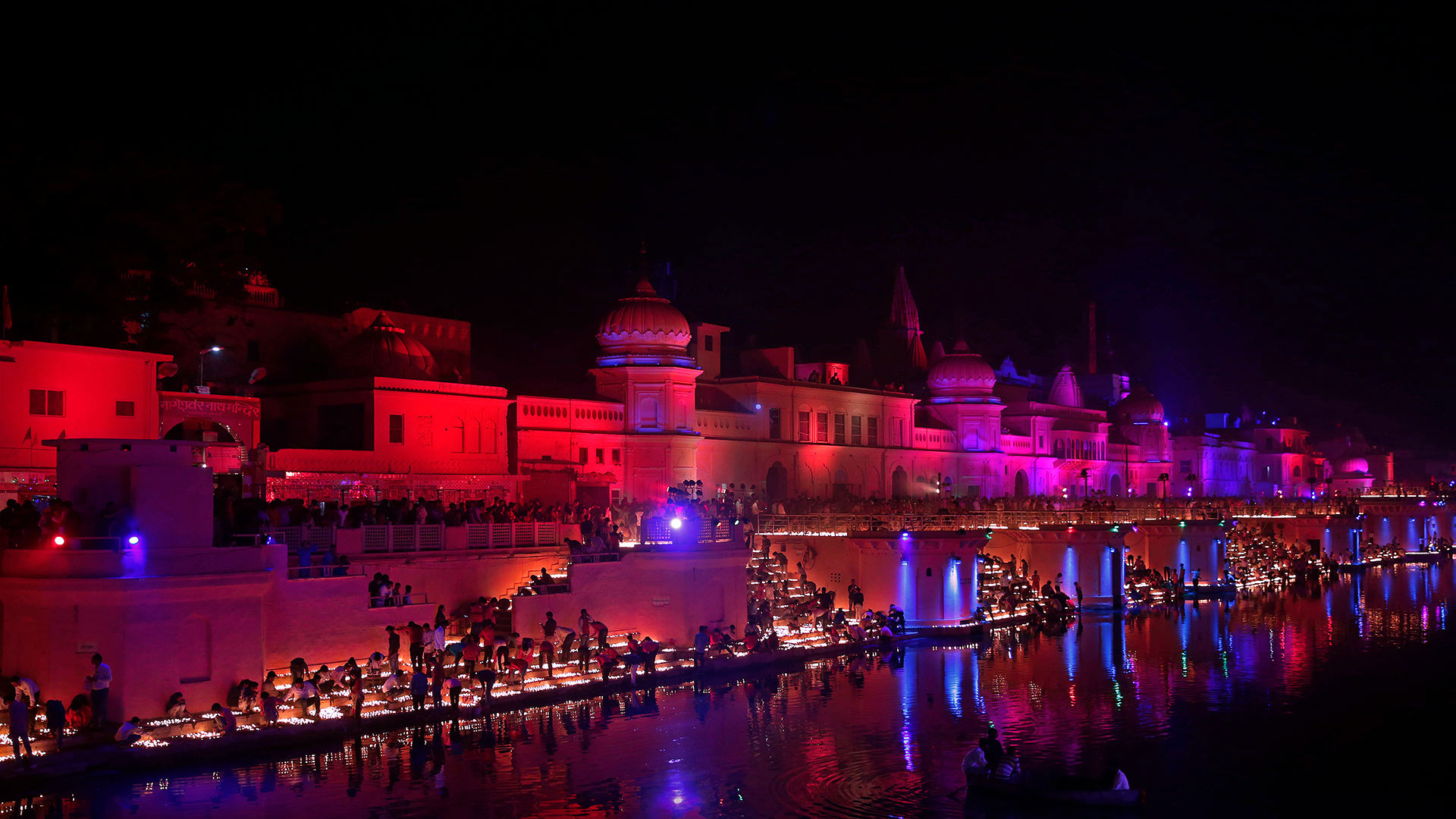 A festival of lights in India

In observance of the Hindu holiday called Diwali, people gathered on the banks of the Sarayu River in the northern Indian town of Ayodhya in autumn of 2018 to light candles and oil lamps called 'diyas.' Attendees that night set a Guinness World Record by keeping 300,000 diyas lit for five minutes. The lights are symbolic of the triumph of good over evil, light over darkness—central themes of Diwali. Ayodhya is a significant location in the Hindu faith, long thought to be the birthplace of Rama, an incarnation of Vishnu, who represents virtue. And as Diwali, a four- or five-day celebration that reaches its peak today (the third day), the Hindus of Ayodhya will be back to light up the riverbank. Will they set another record? 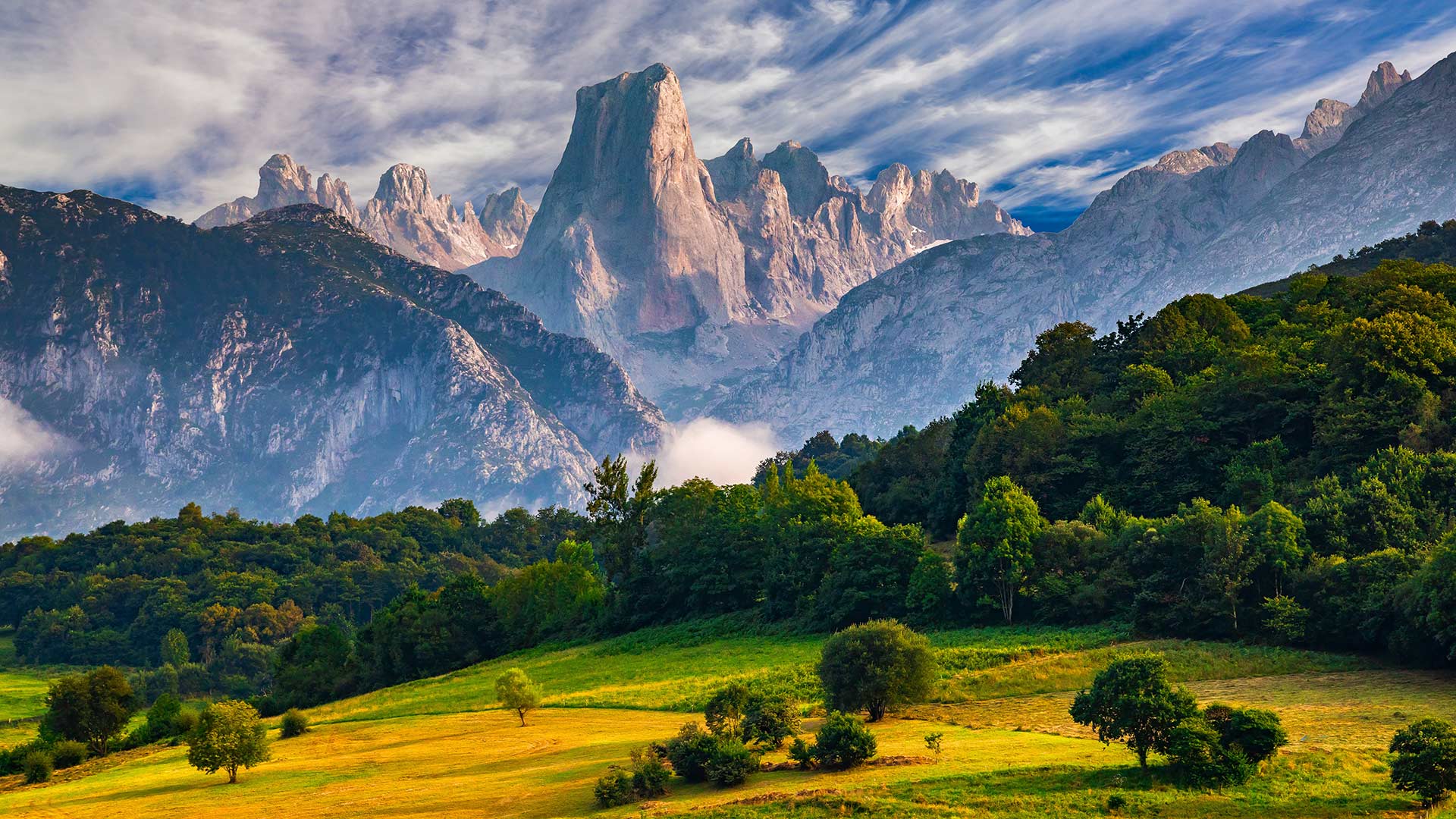 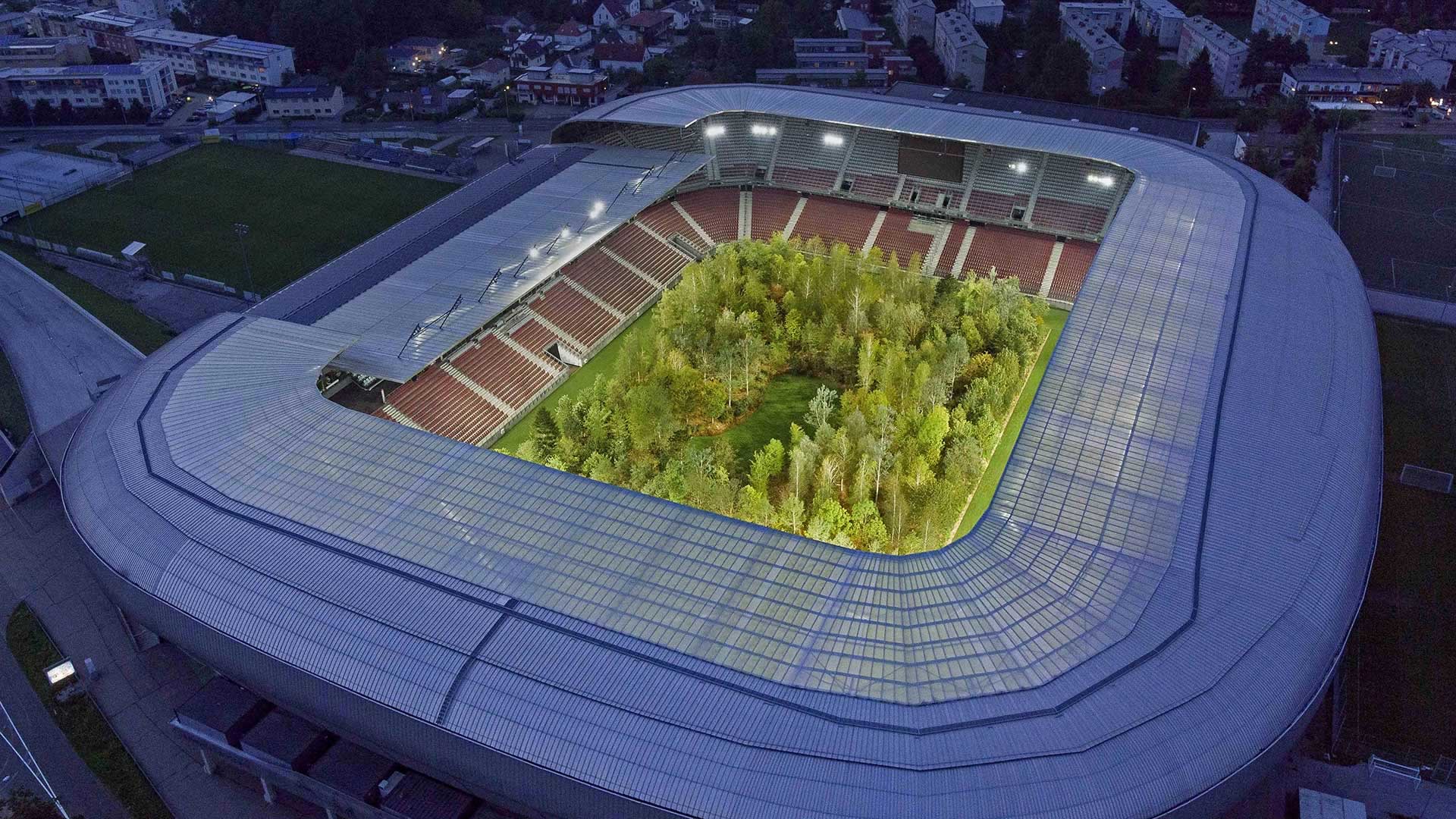 'FOR FOREST' by Klaus Littmann

When artist Klaus Littmann covered the pitch of this Austrian soccer stadium with 300 trees, he not only created the country's largest public art installation—he brought to life a vision of a dystopian future. The installation here at Wörthersee Stadium in the city of Klagenfurt made headlines around the world when it was unveiled on September 8, 2019. Titled 'FOR FOREST: The Unending Attraction of Nature,' it's inspired by a nearly identical pencil drawing created in 1970 by Max Peintner, an artist known in the European environmental movement. Littmann first saw the drawing 30 years ago and held onto his dream of turning it into a reality for decades. Through his work, he hopes to spark conversation about climate change, perception, and the relationship between nature and people. If you'd like to see it in person, you'll have to hurry. It closes tomorrow, October 27, at 10 pm. 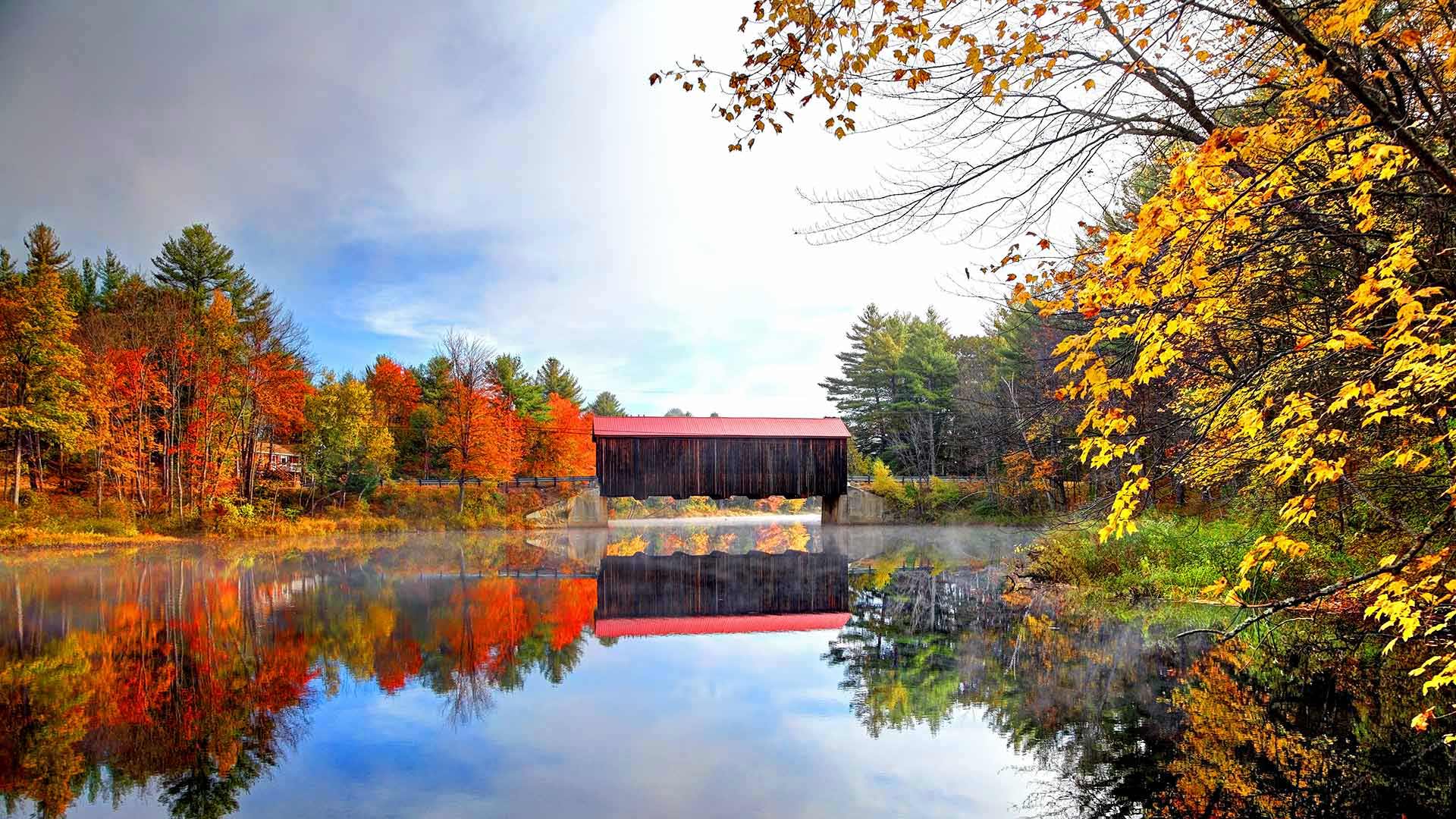 The County Bridge has offered a picturesque passage over the Contoocook River in southern New Hampshire since 1937, when it replaced its covered predecessor that had been destroyed in a flood. But why even build a covered bridge? In a word, longevity. The roof and walls help protect the timber supports from rot. For comparison, an uncovered wooden bridge lasts an average of 20 years, while the covered variety can reach 100 years or more.

But even their durable reputation couldn't withstand our drive toward faster travel—the railroad, the automobile, and the heavier loads that came with both. As iron and then steel replaced timber as the bridge-building material of choice, covered bridges gradually went the way of the horse and buggy that used to traverse them. Out of about 12,000 covered bridges that were built in the US, only 750 remain today, with a quarter of those in Pennsylvania. 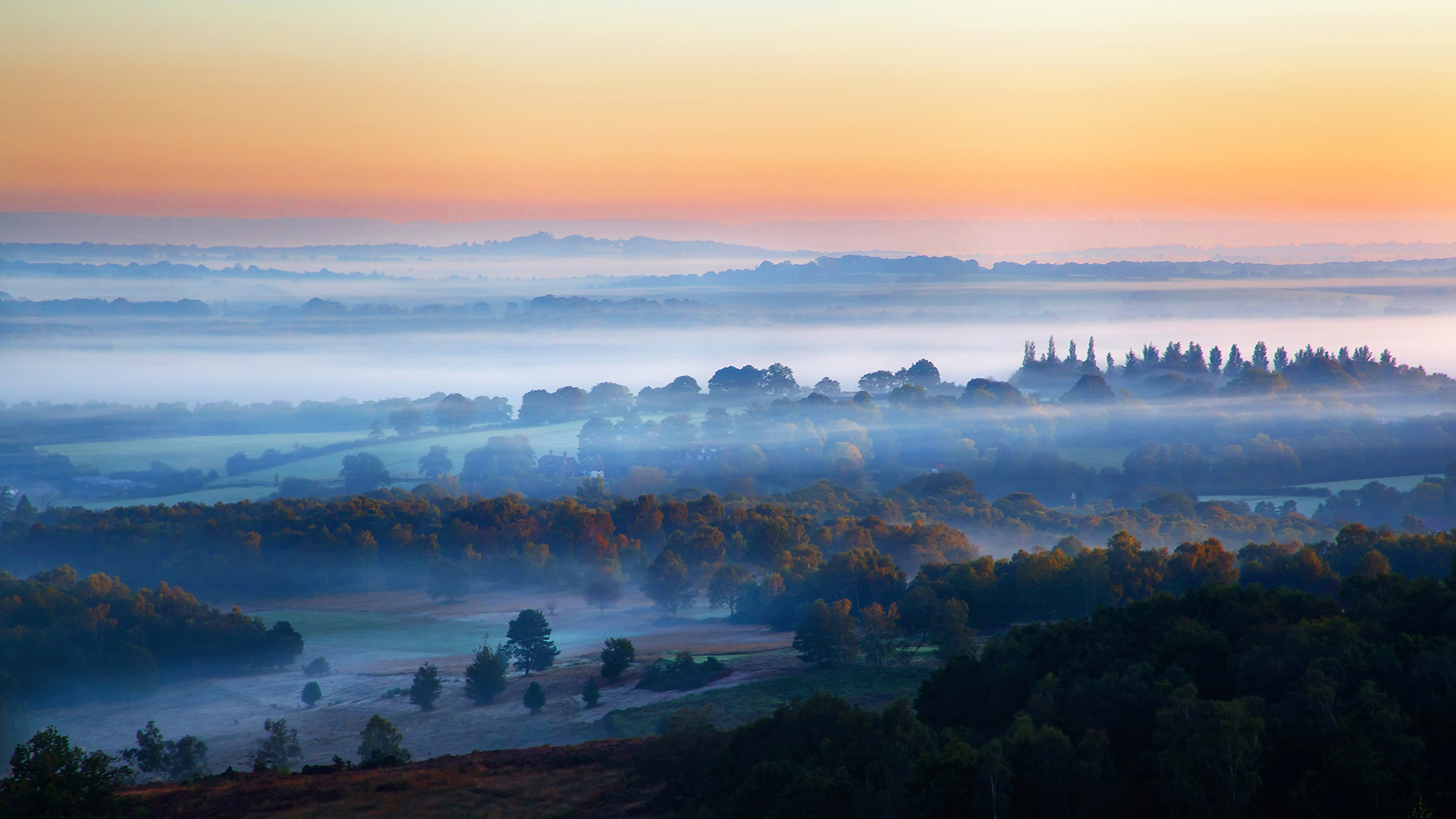 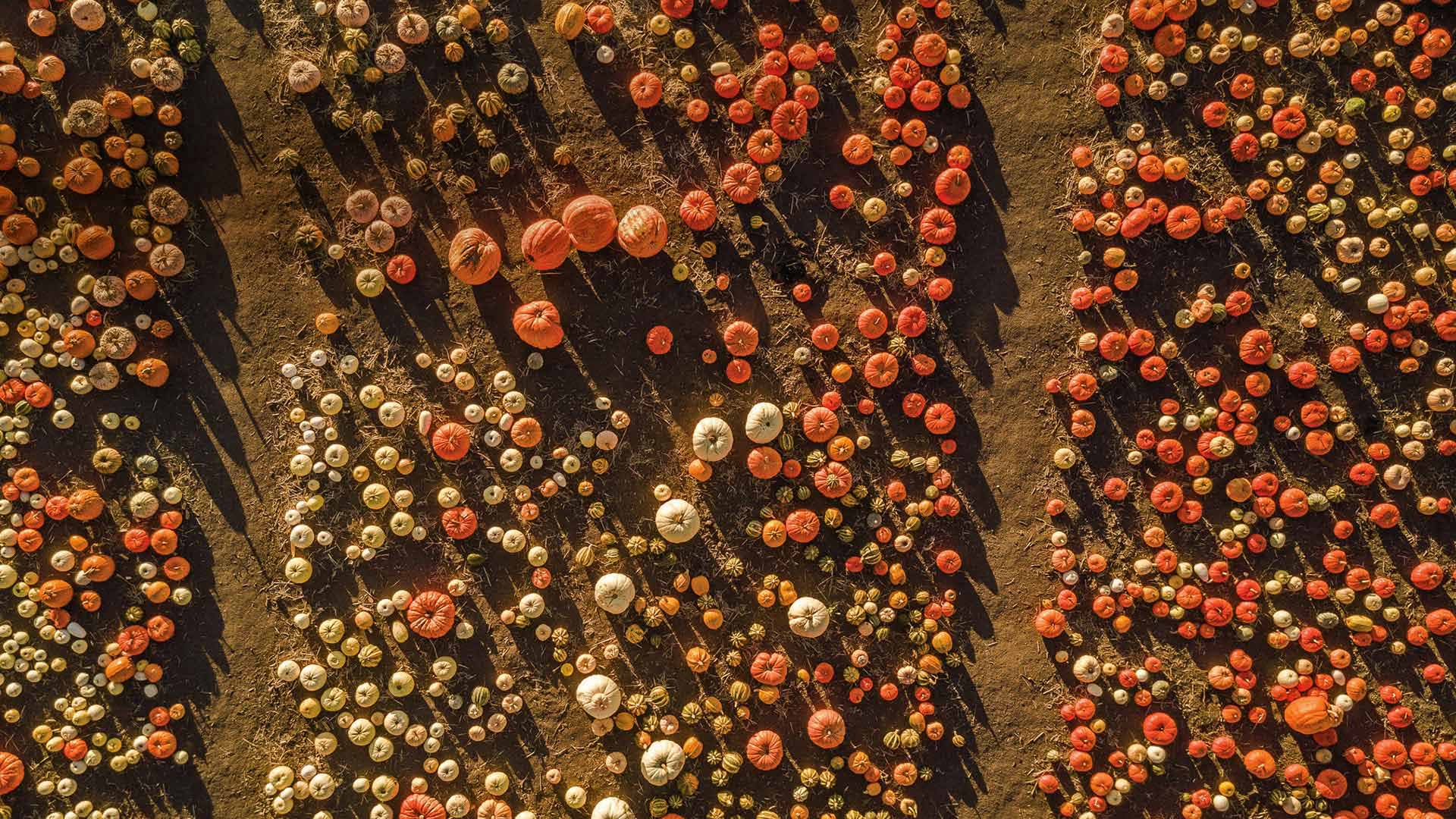 The height of pumpkin season

If you happen to be in the Bay Area this weekend, you might want to swing by the Half Moon Bay Art & Pumpkin Festival. The annual event displays enormous champion pumpkins weighing over a thousand pounds, hosts live pumpkin carving demonstrations, and offers really every kind of pumpkin-related food you can imagine, from pies to pumpkin flavored artisanal cocktails. Plus, Gourdy, the anthropomorphized pumpkin mascot. While California is the leader in the consumer pumpkin harvest, it is only the second-largest producer in the country. Illinois grows approximately a quarter of the 2 billion pounds of pumpkins the US produces yearly, though 80 percent of that ends up as pie filling or other processed products. Pumpkins require between 90-120 days to mature, so most are planted by late May or early June to coincide with our Halloween carving needs.

While carving vegetables into faces is a tradition in many parts of the world, the carving of jack-o’-lanterns around Halloween originated in Ireland in the mid-19th century, using potatoes or turnips. Irish immigrants brought the tradition to the US around the same time and discovered that the native pumpkins were much easier to carve. 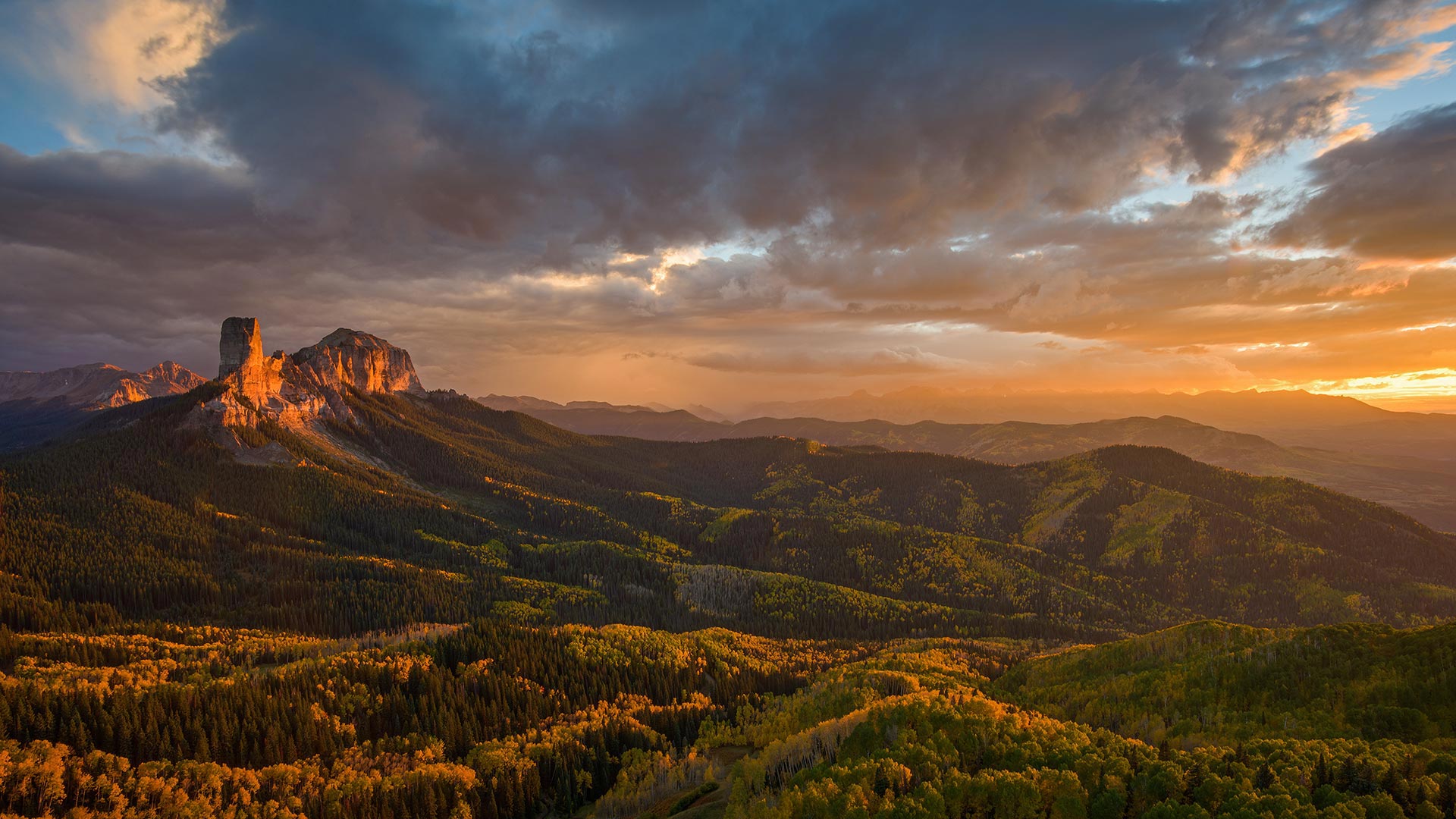 Fall color sweeps across the West

The leaves are changing across the West, and few views are more striking than this one of the fall foliage in the Uncompahgre Forest in the shadow of Chimney Rock. The spire and its neighbor Courthouse Mountain dominate the landscape here year-round, but the changing colors make this area—and drives along the nearby Million Dollar Highway—even more scenic in the fall.

The forest gets its name from the Native Americans who have historically lived here, a band of Ute Native Americans called the Uncompahgre Ute People. The Ute People came to what is now Colorado and Utah around 1300, and usually spent their autumns traveling to make offerings to the spirits and hunting buffalo. And, we presume, admiring the spectacular fall colors.