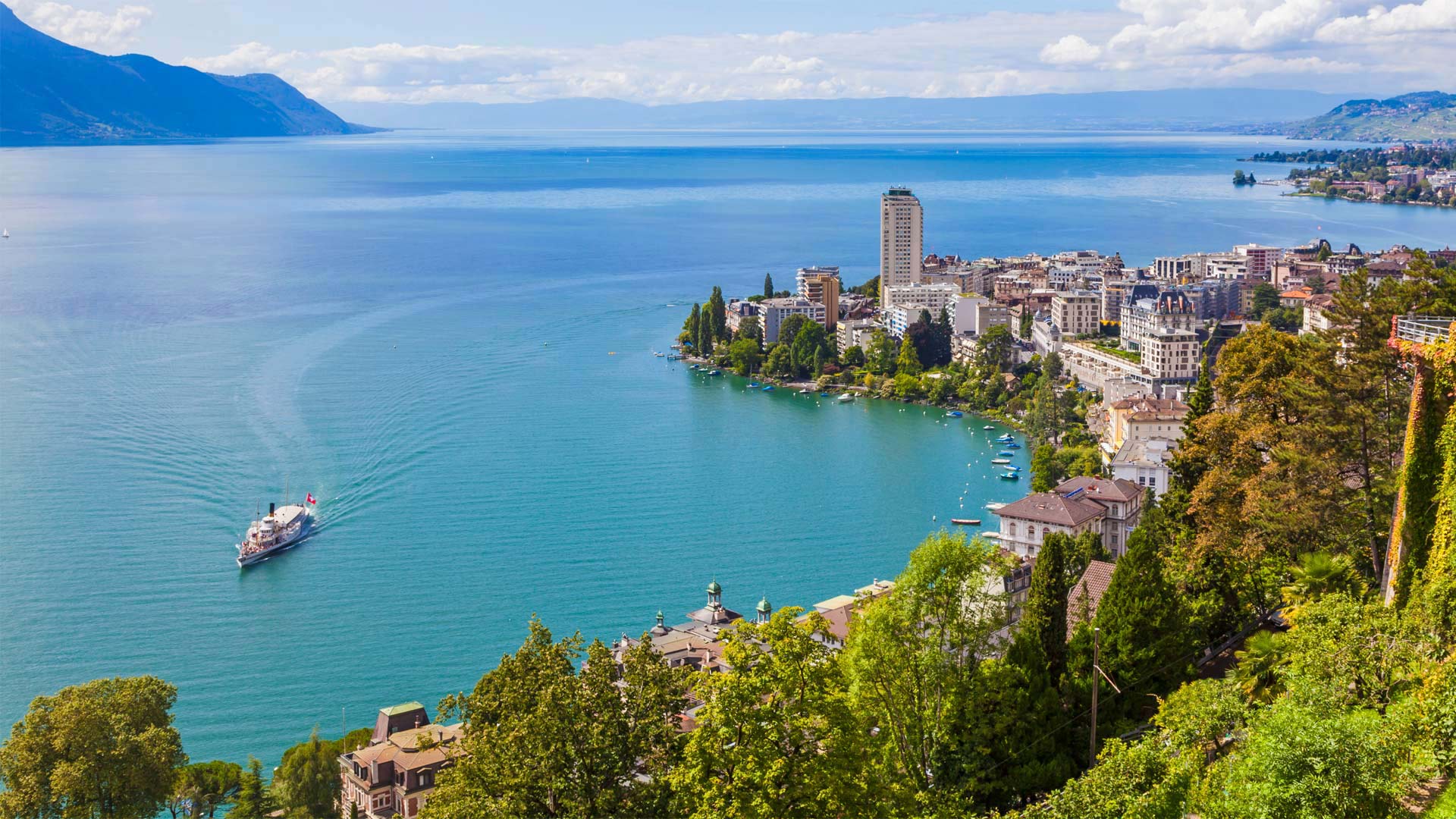 Montreux, Switzerland, and all that jazz

We're looking at Lake Geneva and Montreux, Switzerland, where the Montreux Jazz Festival begins today. Despite its name, the festival isn't just about jazz. It highlights different styles of music across multiple venues over two weeks. This year's lineup includes three farewell-tour stops (Elton John, Anita Baker, Joan Baez) and big names in jazz (Chick Corea, Bobby McFerrin), as well as young artists representing a variety of genres. The festival began in 1967 at the original Montreux Casino, which famously burned down during a December 1971 Frank Zappa performance. The fire was memorialized by Deep Purple in their hit 'Smoke on the Water.' A monument commemorating the band and their song can be found next to the rebuilt casino. 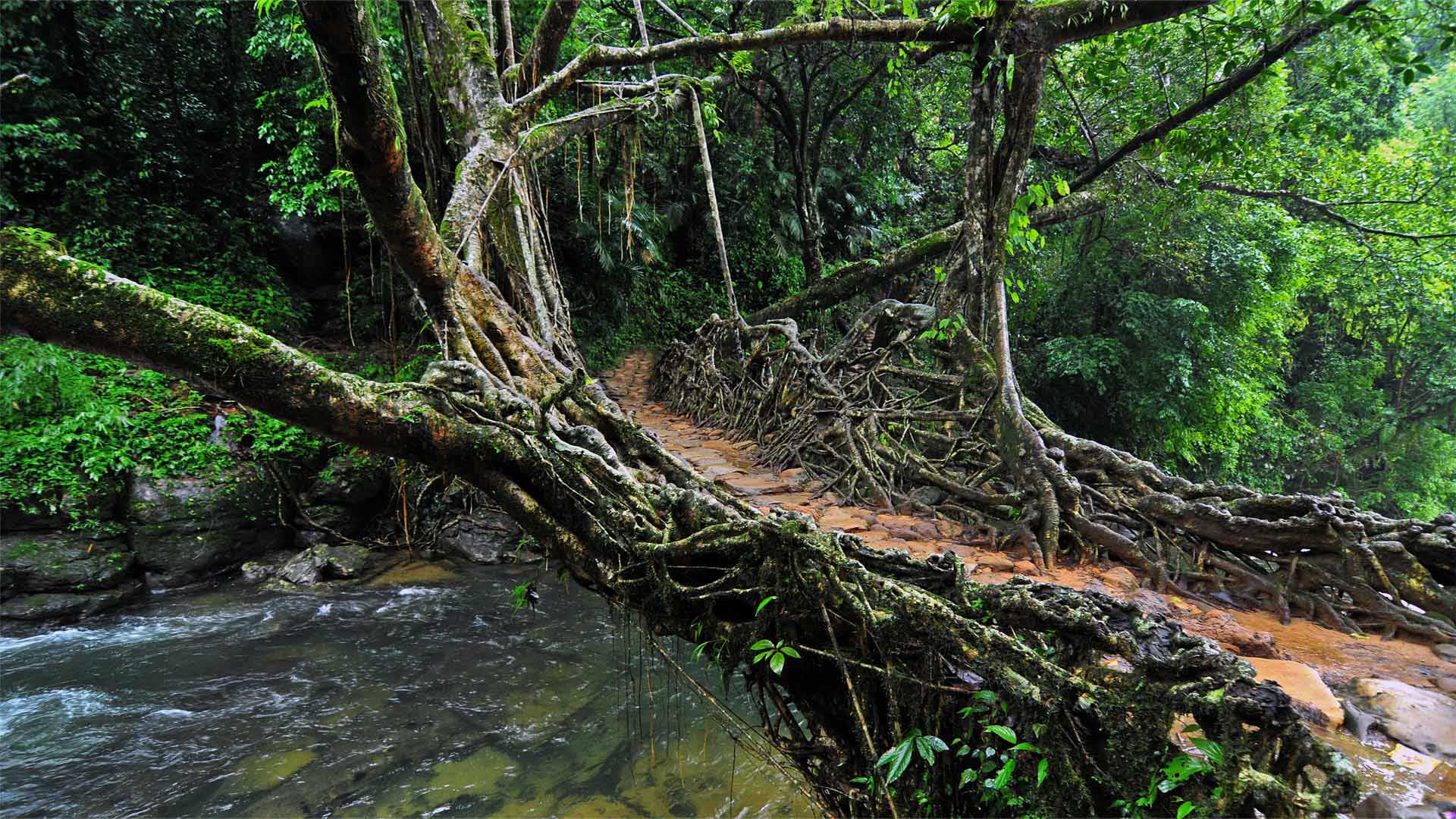 The roots of invention

Living root bridges like this can be found in the tropical rainforests of Meghalaya, a state in northeast India, which is among the wettest places on Earth. The gentle waterways that flow through the region's valleys become gushing torrents during the summer monsoon season and will wash away traditional bamboo bridges. So, generations of indigenous Khasi people have devised a way of building root bridges by shaping living trees.

It works like this: Rubber fig trees are planted or located on opposite riverbanks. As the trees' above-ground roots grow, the Khasi will guide them across the water, sometimes with the support of temporary scaffolding, like bamboo. After years of patient tending, the roots will eventually join and take hold of each other, forming a living suspension bridge that provides safe passage over the swollen rivers. The innovation has proved critical to the Khasi people. In this environment, bridges made from harvested materials would quickly rot and fall apart, leaving villages cut off and isolated. Building a living root bridge requires patience, though. It takes about 15 to 30 years to grow one sturdy enough to support humans. But investment pays off. As these bridges age, they get stronger. Some are 100 feet long and can hold over 50 people. 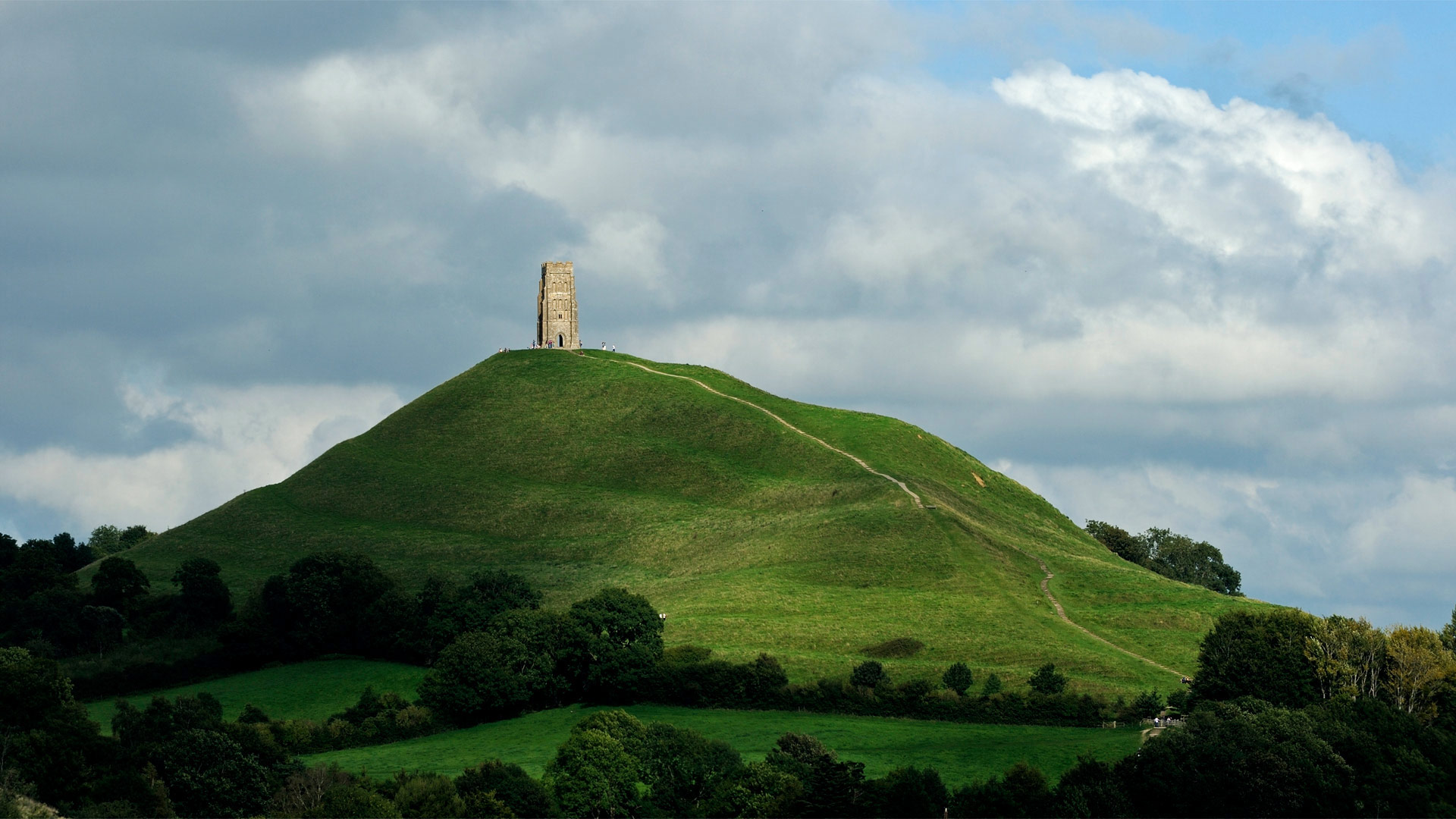 Get amped for Glastonbury

Greetings from Glastonbury Tor and St. Michael's Tower in Somerset county of southwest England. The tor (a Celtic word for an isolated hill) is often mentioned in Celtic mythology, and some believe it to be the site of Avalon, a mythical island central to legends of King Arthur. Glastonbury Tor has other enduring spiritual associations as well, particularly to various neopagan beliefs. Archaeological evidence suggests that several buildings have been constructed at the top of the hill over many centuries, but all that remains today is the roofless tower of St. Michael’s Church, built in the 1300s.

Glastonbury Tor may dominate the surrounding coastal plain, but it isn't visible from the nearby Glastonbury Festival, which begins today and runs through Sunday, June 30. Since 1970, music fans have turned the Glastonbury area into an outdoor bacchanalian summer retreat as they converge on the area to watch some of the world's most popular pop and rock musicians perform live at the festival. Most summers, the farmland around the village of Pilton—including festival-creator Michael Eavis' Worthy Farm—is transformed into the largest greenfield festival in the world, with more than 100,000 people attending and camping in the area. In an homage to the area’s most enduring feature, the festival's official artwork this year is a representation of Glastonbury Tor and its tower under a full moon, surrounded by red clouds.

Sutherland Falls spills over the side of Lake Quill in the jagged, glacier-carved landscape of Fiordland National Park on New Zealand's South Island. For years, it was believed to be the tallest waterfall in the world, thanks in part to a rough estimate by Scottish explorer Donald Sutherland, the first European to see the falls. Later, more scientific surveys proved this estimate to be significantly inflated, but Sutherland Falls is still 1,900 feet tall, which is plenty high in our book. 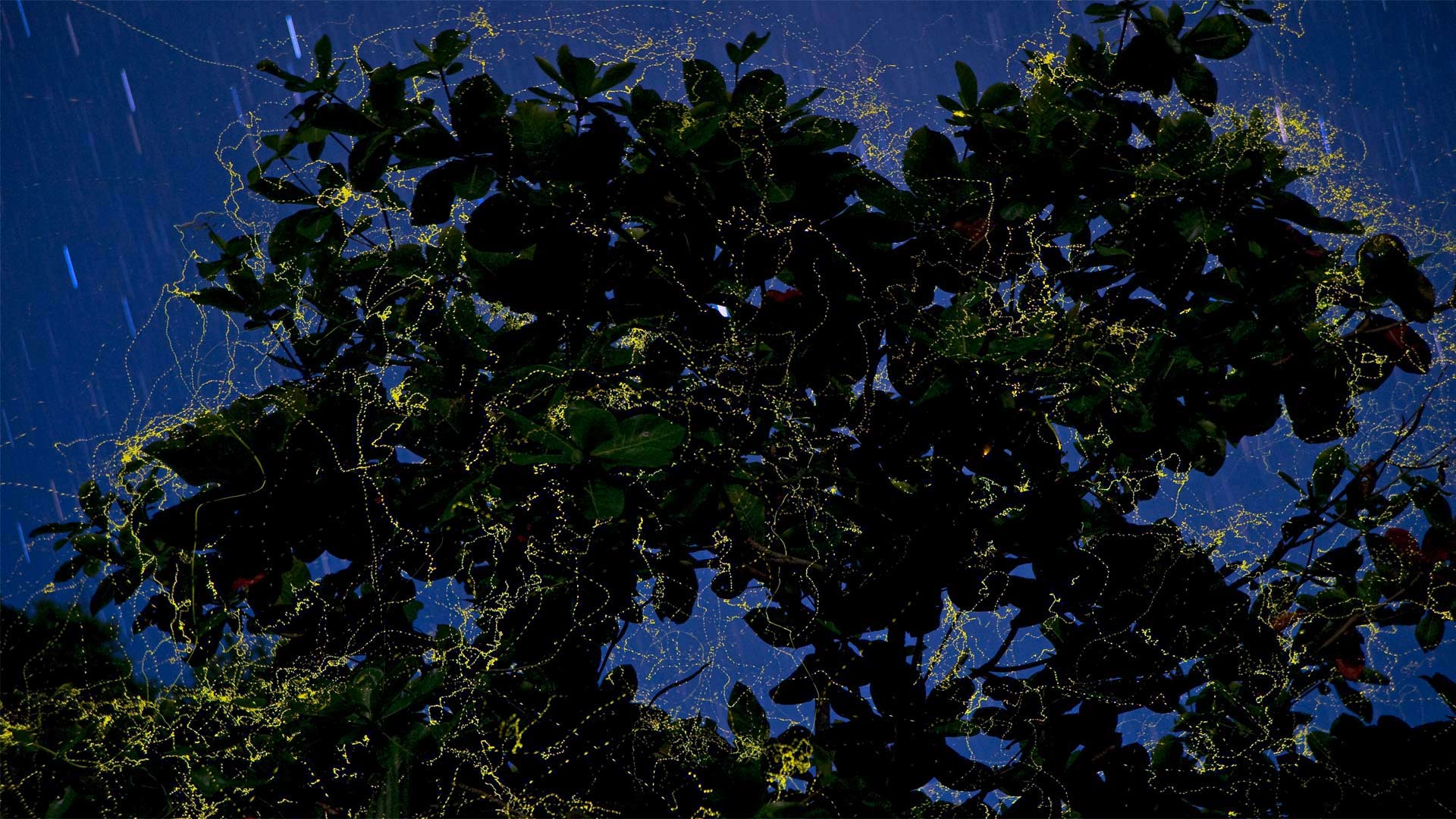 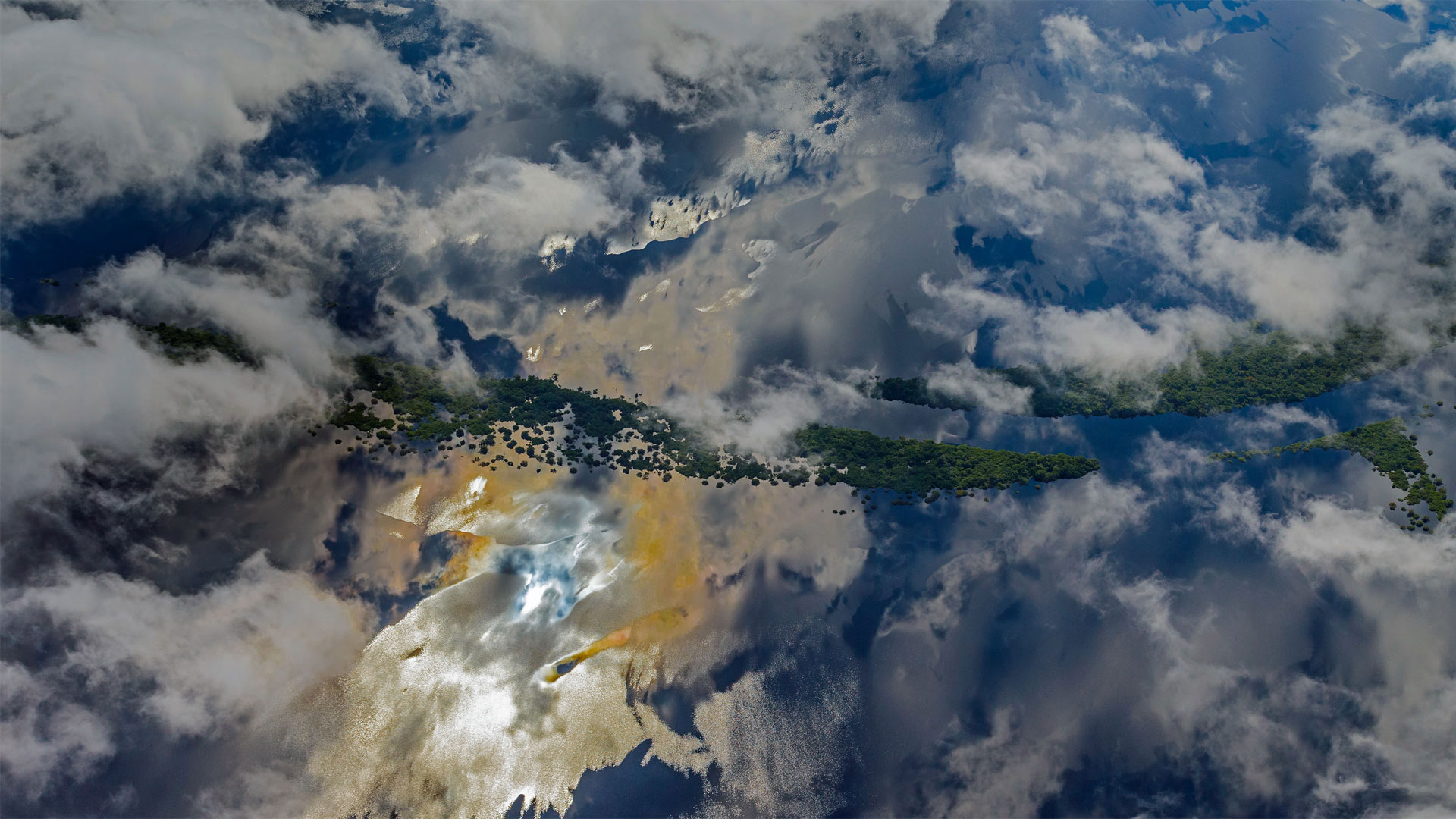 Reflections on the mighty Amazon

For World Rainforest Day we take you below these clouds to the Amazon River Basin and the largest rainforest in the world. At more than 2.1 million square miles, the Amazon accounts for half of Earth's remaining tropical rainforests. And a fifth of the world's freshwater flows through this river basin. Perhaps a tenth of the planet's known species call it home, many of which have yet to be identified—that's trees, plants, fish, mammals, and a third of Earth's bird species. Now take a deep breath. The ‘Lungs of the World' produces 20 percent of Earth's oxygen, while storing vast amounts of carbon dioxide, earning it an all-star ‘carbon sink' status.

Why's it called the Amazon? Spanish explorer and conquistador Francisco de Orellana gave it that name after encountering indigenous women of the Pira-tapuya tribe who fought alongside men. The women warriors of the region reminded Orellana of the Amazons of Greek mythology. Today, the Amazon rainforest still sounds almost mythologically powerful—and it is. Yet, all rainforests are fragile biosystems. Worldwide, we lose swaths of these precious environments to agriculture and mining. However, the pace of deforestation is slowing as farming methods improve and advocacy efforts build awareness around these rich bio-diverse tropical rainforests. The more we learn about rainforests, the more we appreciate how our own future, and the future of our planet, hinge upon their health. 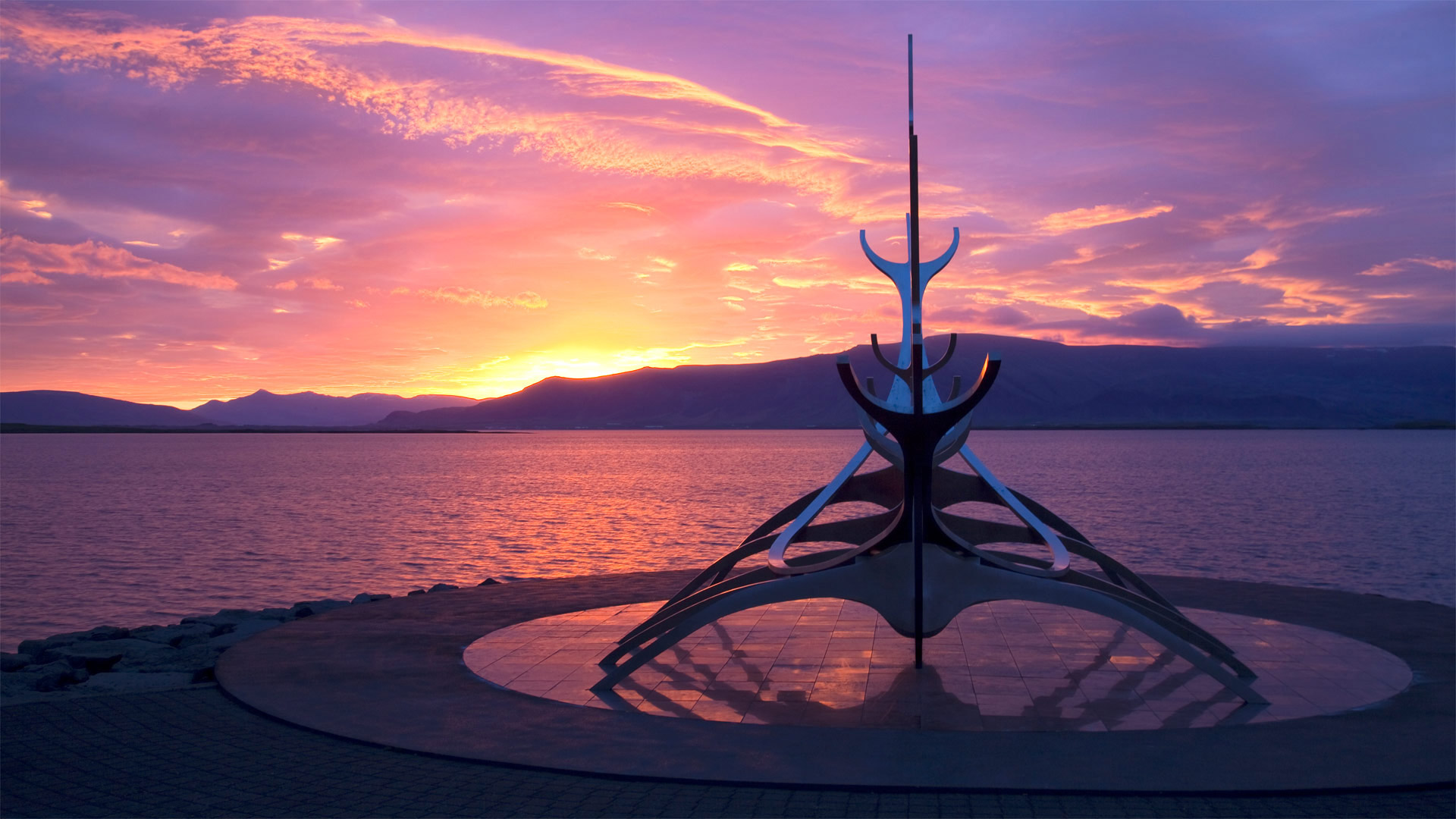 Ode to the sun

Today marks the summer solstice in the Northern Hemisphere—the longest day of the year and, for most of us on this side of the globe, the first official day of summer. (Iceland, being Iceland, celebrates the first day of summer in April, an old Viking tradition.) What better way to celebrate this day of sun than with Reykjavik's Sun Voyager. Though it looks a bit like a Viking ship or maybe a fish skeleton, sculptor Jón Gunnar Árnason created it to be a dream boat and an ode to the sun. Sounds good to us. Join us in celebrating the sun today. 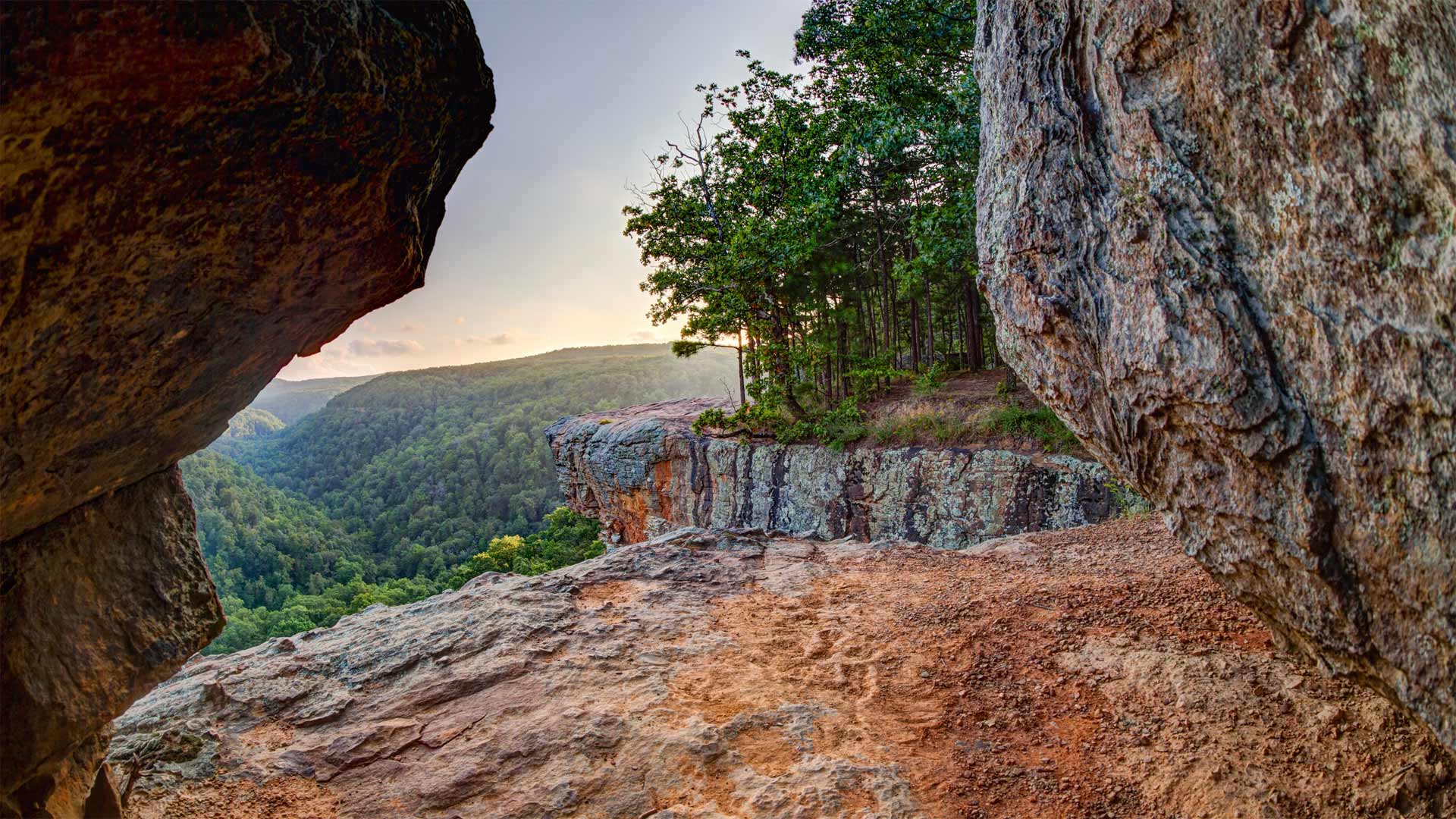 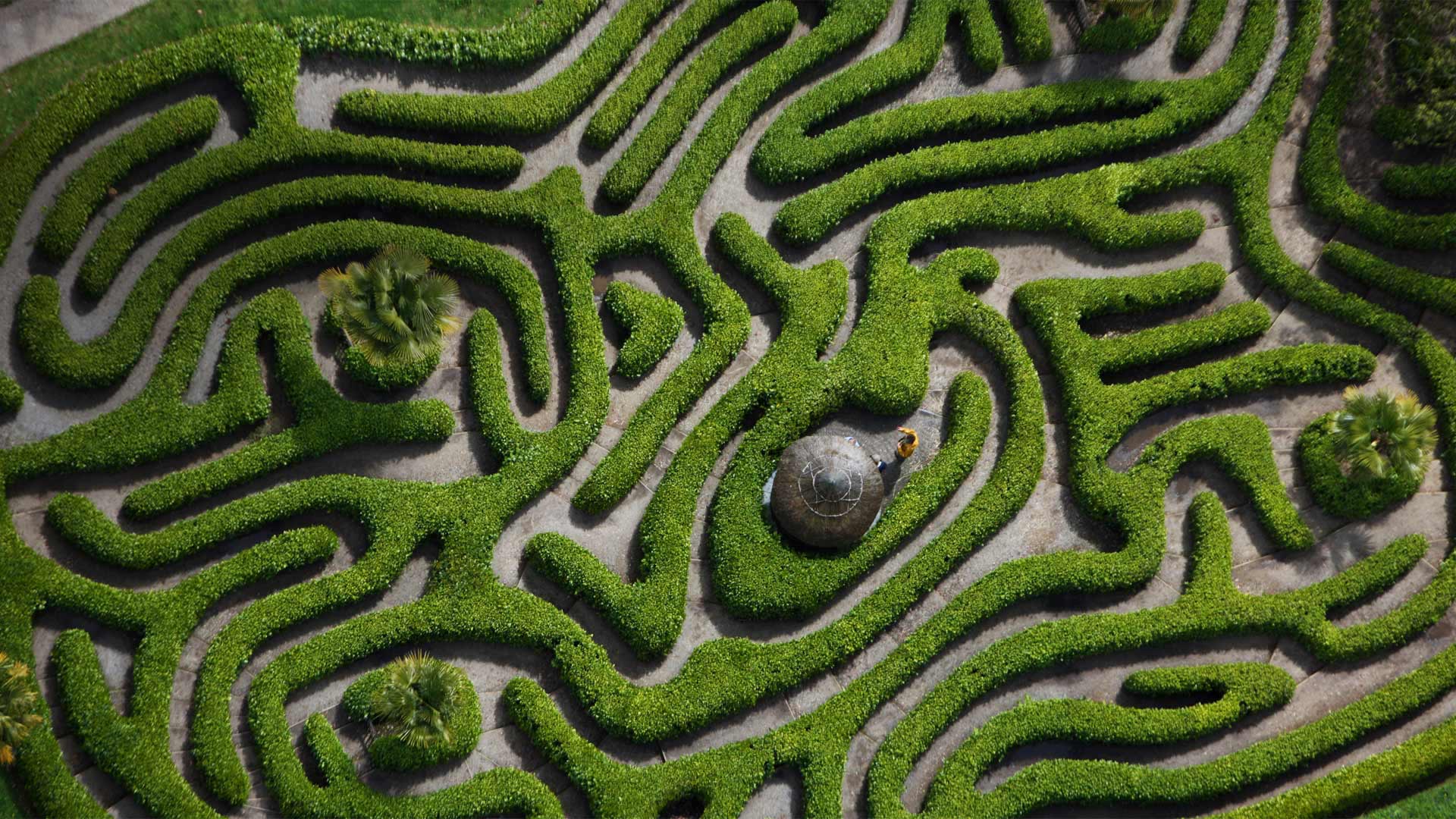 Created by Alfred Fox in 1833 to entertain his 12 children, the cherry laurel hedge maze at Glendurgan Garden was designed to resemble a serpent curled in grass. In addition to the maze, Glendurgan also includes an amazing collection of exotic plants that Fox obtained on his travels and imported from abroad. Luckily, the temperate climate of Cornwall allowed these rare imports, like bamboo, Brazilian giant rhubarb, and tree ferns to thrive in this valley garden. In 1962, the Fox family gifted the gardens to the National Trust, a UK charity that works to preserve places of historic interest or natural beauty. 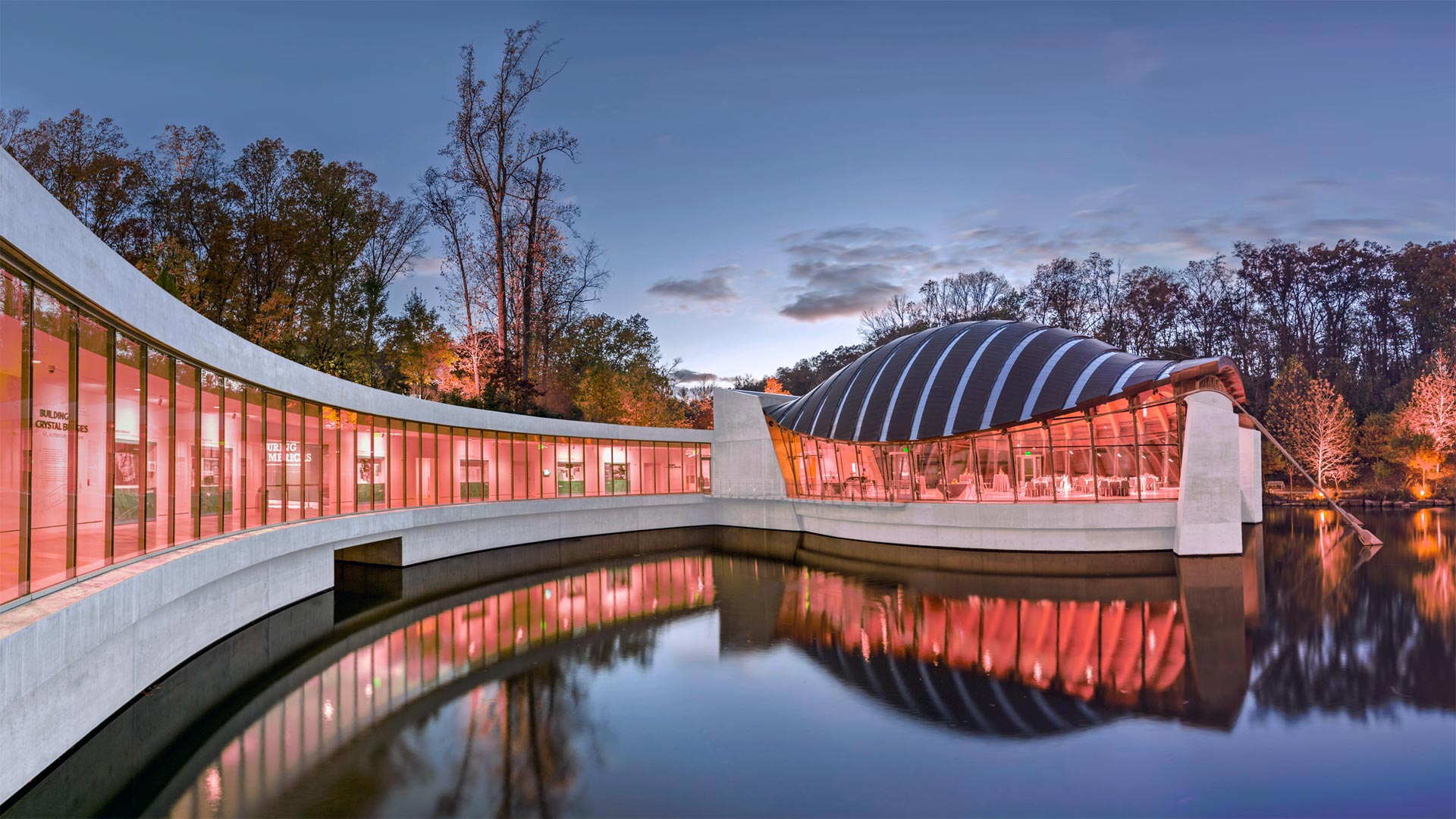 Bentonville, Arkansas is probably not the first place that comes to mind when you think about visiting a world-class art museum. But Crystal Bridges is a new must-see in the art world. Its collection includes paintings, sculpture, photography, drawing, and installation art from colonial times to today and features American artists such as Maya Lin, Andrew Wyeth, Jacob Lawrence, Jackson Pollock, and Georgia O'Keeffe. But perhaps the biggest piece of art is the museum itself. Designed by Moshe Safdie, the building blends seamlessly and beautifully into the surrounding Ozark landscape. In addition to the art and architecture collections, there are eight nature trails on the grounds. And admission to the museum is always free.