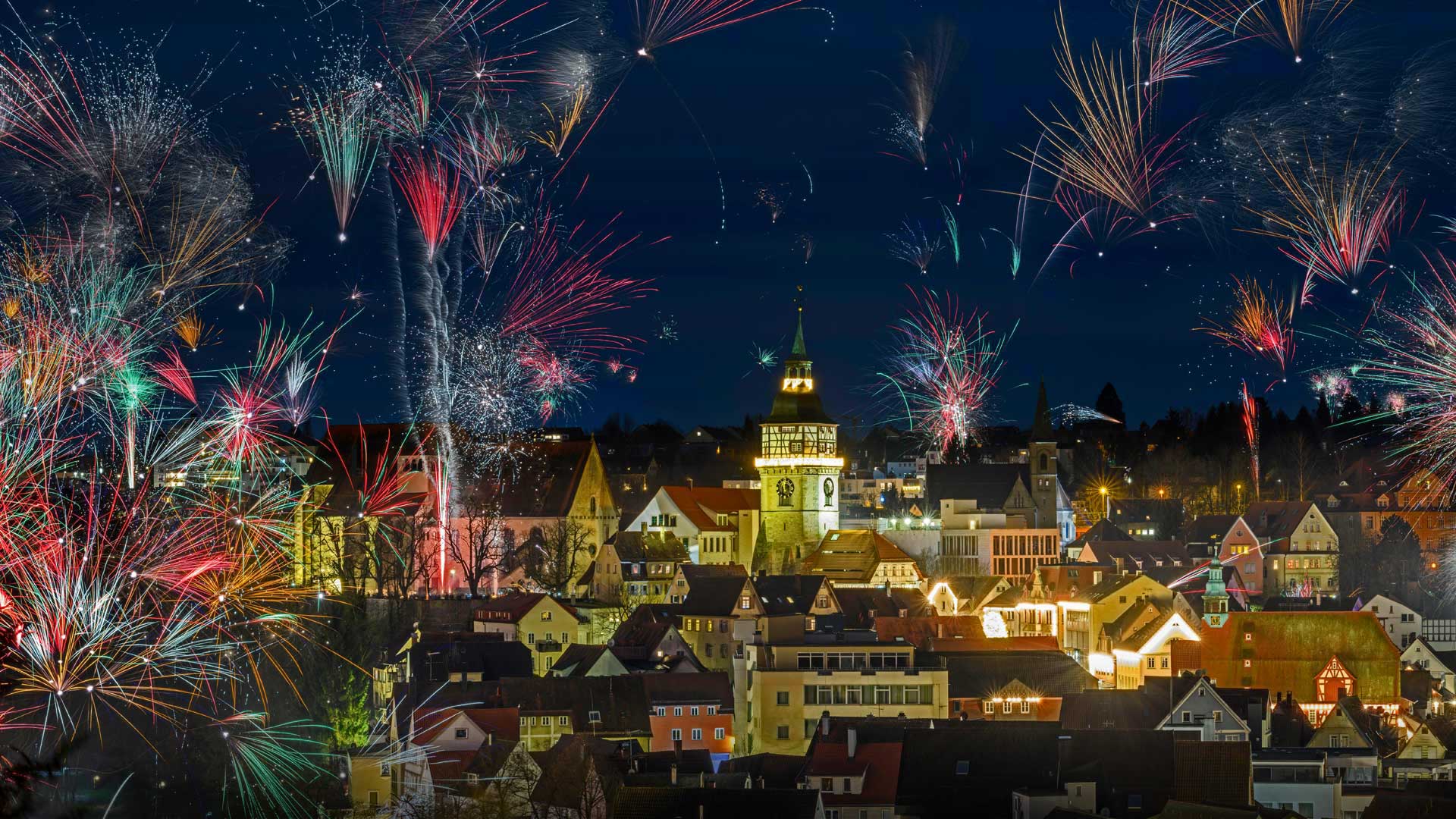 Backnang, the city celebrating the new year in this photo, is in Germany's Baden region. Thanks to the Rhine River on the west, and the Black Forest to the east, the soil in Baden is ideal for vineyards. Among the varieties of wine produced here, Spätburgunder is common, which you may know by its more common French name: Pinot Noir. It seems likely that the people of Backnang would be celebrating with a glass of Pinot or something else this evening. However you choose to celebrate, here's wishing you a very happy and healthy new year! 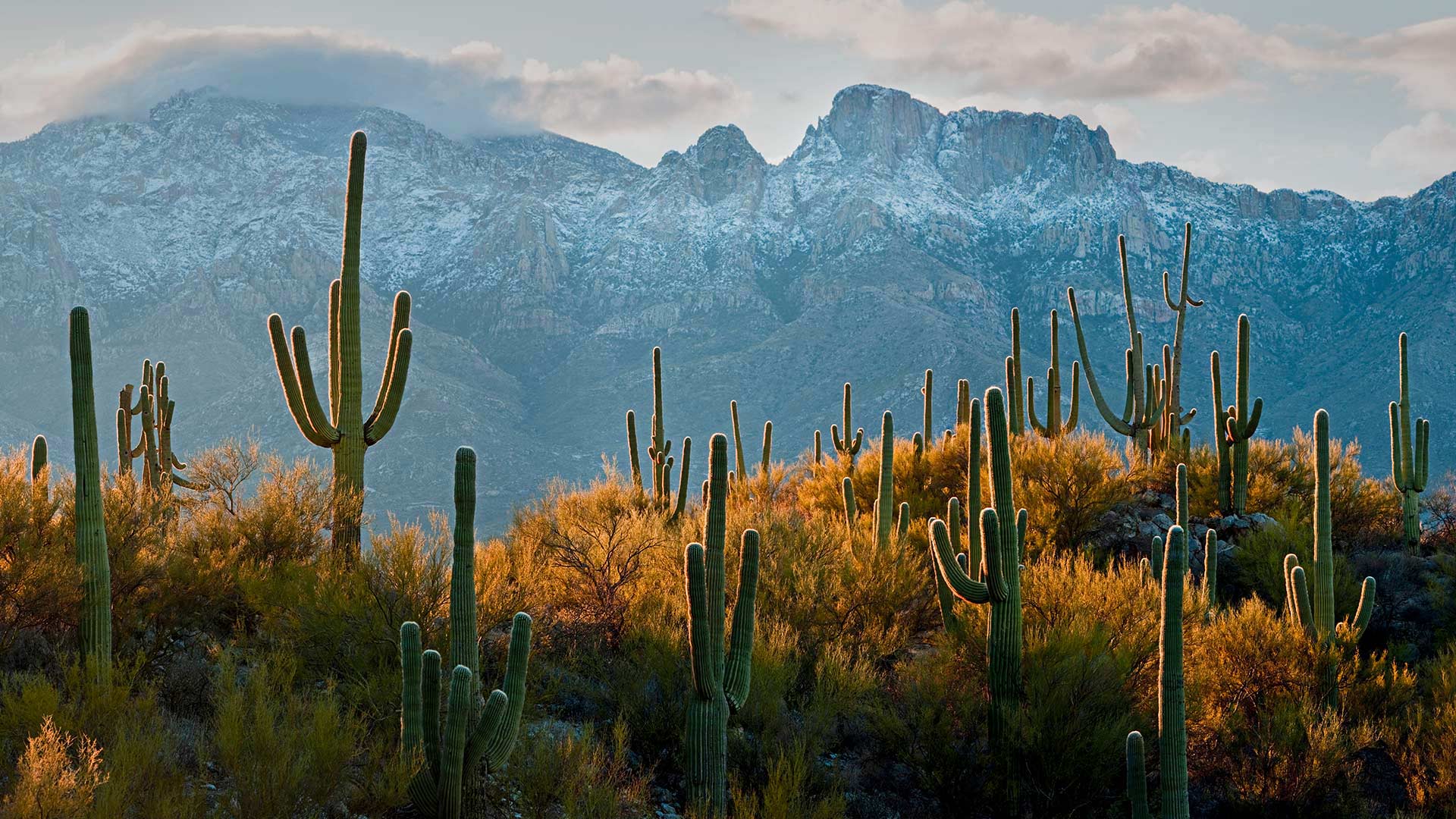 Though it's December, it isn't cold and snowy everywhere in North America. Here, near Tucson, Arizona, the Sonoran Desert stays warm year-round. In this photo, we're looking at a 'sky island'—an isolated, high-elevation woodland surrounded by radically different lowland environments. In this case, the desert land at the base of the mountain is peppered with saguaros—a stately cactus recognized for its long arms. The snow-capped Santa Catalina Mountains in the distance are part of the Madrean Sky Islands and are home to Mount Lemmon Sky Valley, which is the southernmost ski destination in the US. The ski area covers the slopes of Mount Lemmon, which reaches 9,150 feet at the summit and gets about 180 inches of snow annually. 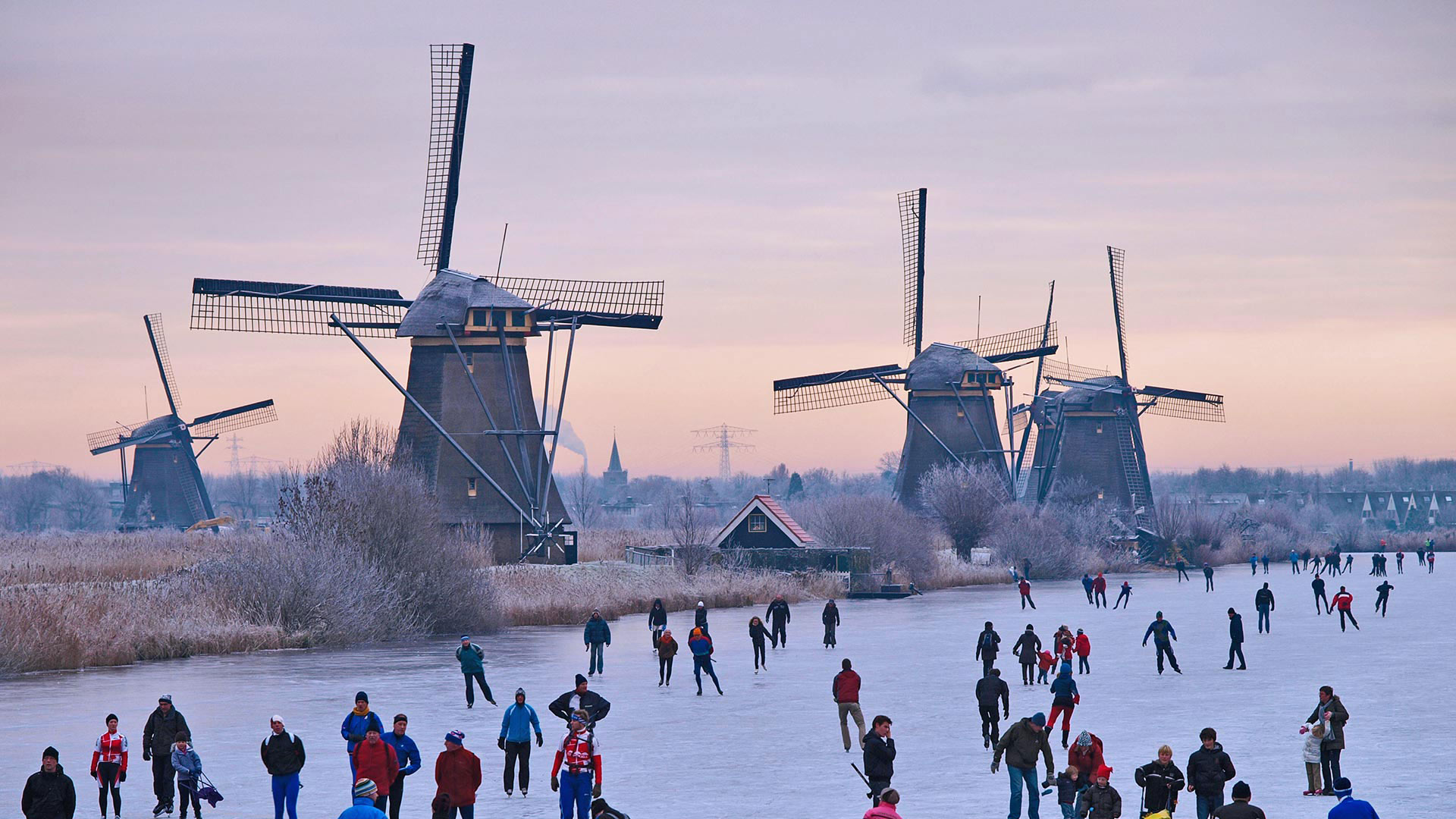 These skaters in the village of Kinderdijk are embracing 'winterpret,' a Dutch word that means 'winter joy' or 'winter fun.' Whenever temps drop low enough, many locals take to the ice and skate away on a complex network of canals. These waterways were built centuries ago—along with pumps, dykes, and the windmills pictured here—to protect the village of Kinderdijk by diverting water from the land. It's an important job, since Kinderdijk, like much of the Netherlands, lies below sea level and flooding is a major problem. Nowadays a modern water management system with multiple pumping stations does the work, and the windmills are left with a new job–to maintain an iconic Dutch scene. In 1997, the Kinderdijk windmills were designated as a UNESCO World Heritage site. 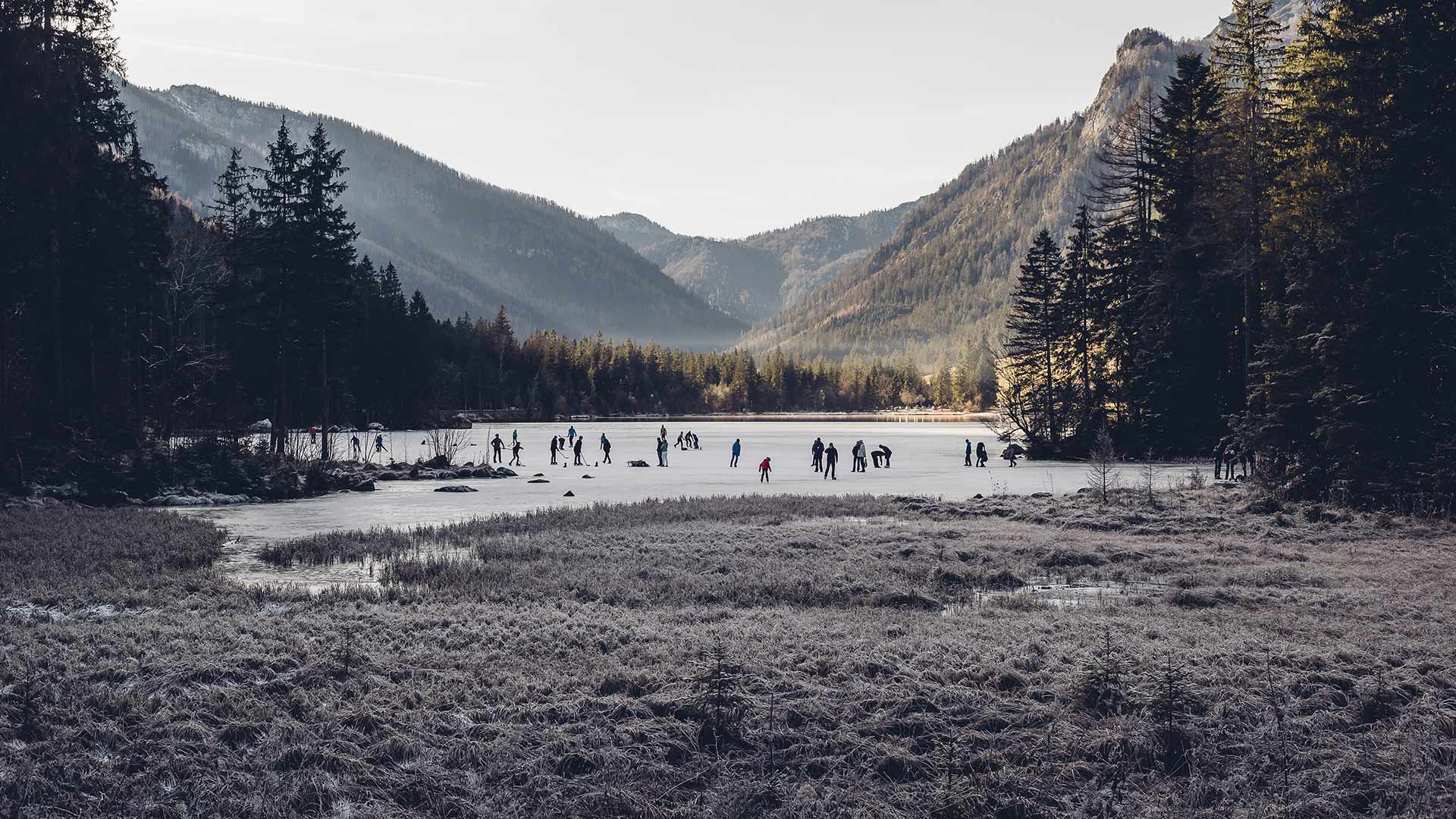 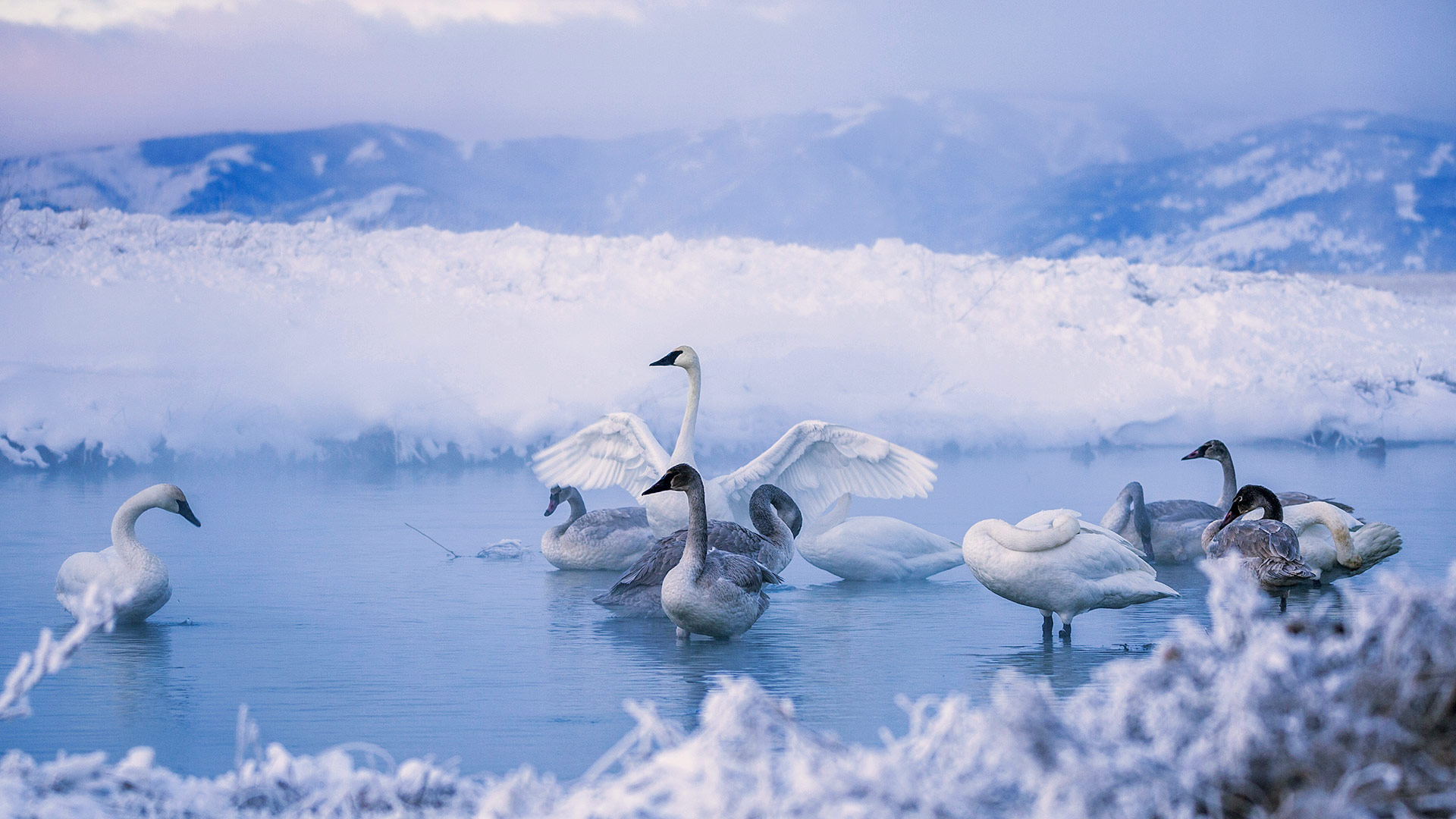 Did they forget to fly south?

Native to North America, trumpeter swans live near rivers, lakes, and coastal byways in northern and western US states in the lower 48, as well as in Canada and Alaska. Depending on where they live, these swans are either resident birds or medium-range migrators. What they all require, though, is open water during winter, since their diet consists almost entirely of aquatic plants. That may be why the swans in this image are drawn to the waters of Kelly Warm Springs in Wyoming, which won't freeze even as snow lines the banks.

Trumpeters are the largest living species of waterfowl in North America. The biggest known cob—that's a male swan--weighed almost 40 pounds and had a wingspan of 10 feet. Although in the early 20th century they came perilously close to extinction, today there's an estimated 35,000 trumpeters. Even with the tremendous recovery, it remains illegal to hunt them. And yes, their calls do sound like trumpets, but Miles Davis they aren't. Click below to listen. 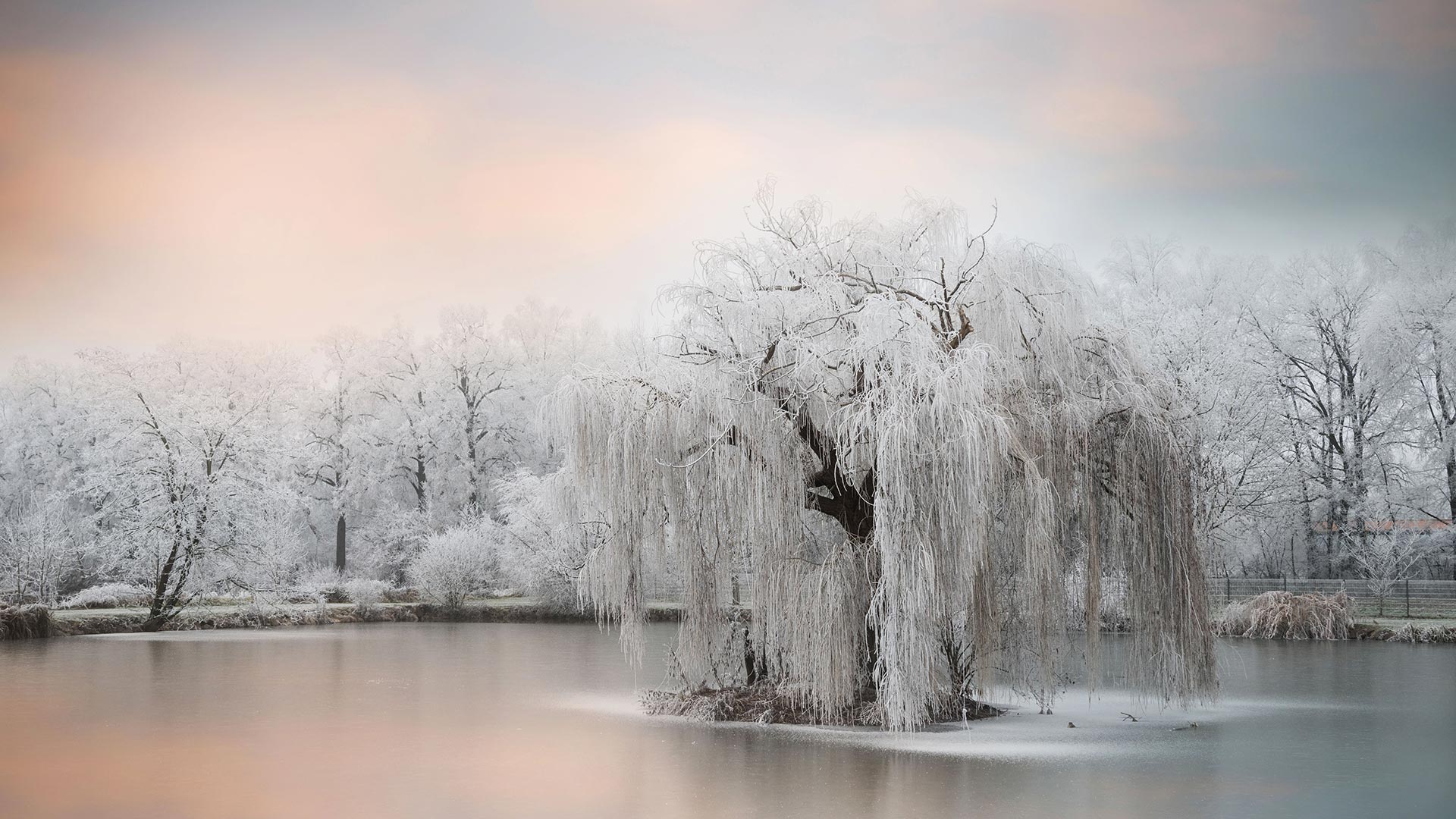 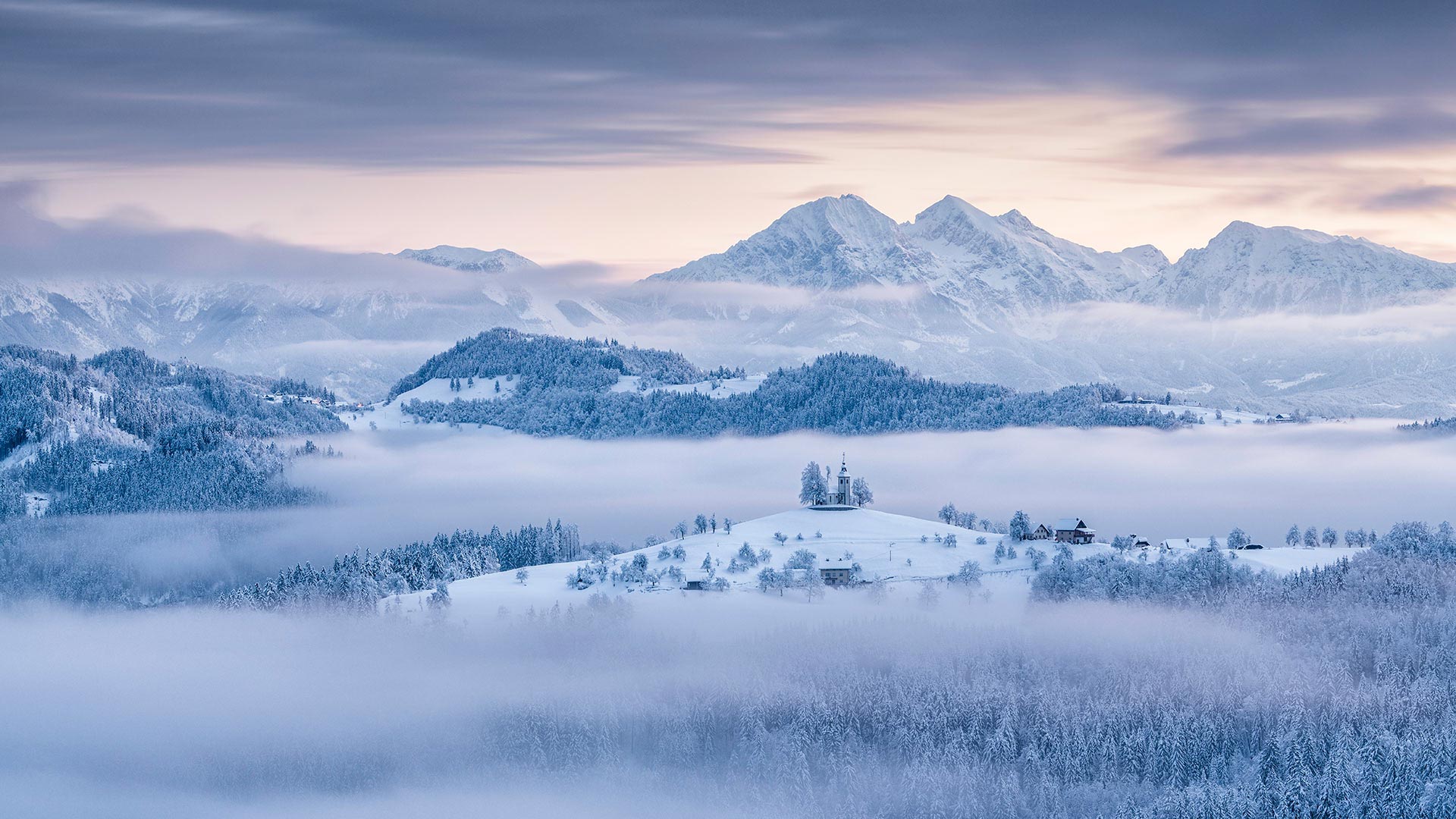 位于Praprotno村之上的圣托马斯教堂 The Church of St. Thomas above the village of Praprotno, for Slovenia Independence and Unity Day (© Guy Edwardes/Minden Pictures)

It's Slovenia's Independence and Unity Day

Today we're featuring an image of the Slovenian village of Praprotno and its Church of St. Thomas for the country's Independence and Unity Day. On December 26, 1990 the results of a Slovenian vote on the country's independence were announced. More than 95 percent of voters answered 'Yes' to the question: Should the Republic of Slovenia become an independent and sovereign state?

Six months later, on June 25, 1991, Slovenia's Constitutional Charter passed, and Slovenians declared themselves citizens of an independent country. A few days after, a brief conflict between the Yugoslav People's Army and Slovenian Territorial Defense occurred, known as the Ten-Day War, but was brought to a swift end with the signing of the Brioni Agreement on July 7, 1991. 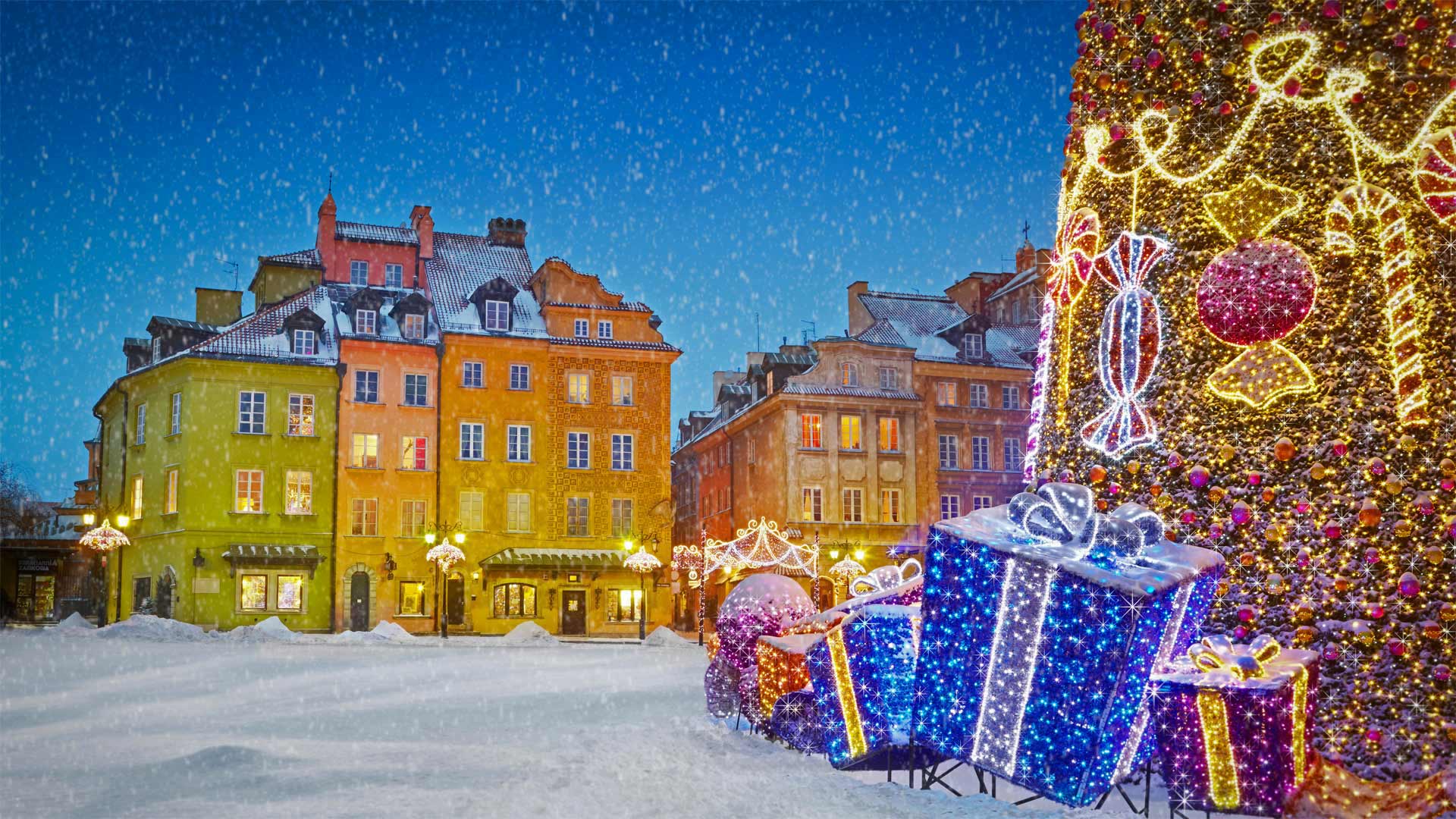 Germans began decorating Christmas trees with candles as far back as the 1700s, but people wouldn't begin stringing trees with electric lights until the late 1800s. Thomas Edison created the first practical incandescent lights and used them to decorate his Menlo Park Laboratory in 1880. Then three years later, the vice president of Edison's company, Edward H. Johnson, had Christmas tree bulbs especially made for him and he used them to decorate the Christmas tree in his New York City home. But they weren't popularized as a holiday decoration until President Grover Cleveland used them on the White House Christmas tree in 1894. Today, bright scenes like this one in Warsaw, Poland, wouldn't be complete without holiday lights.

If you're celebrating Christmas today, we wish you a merry one. 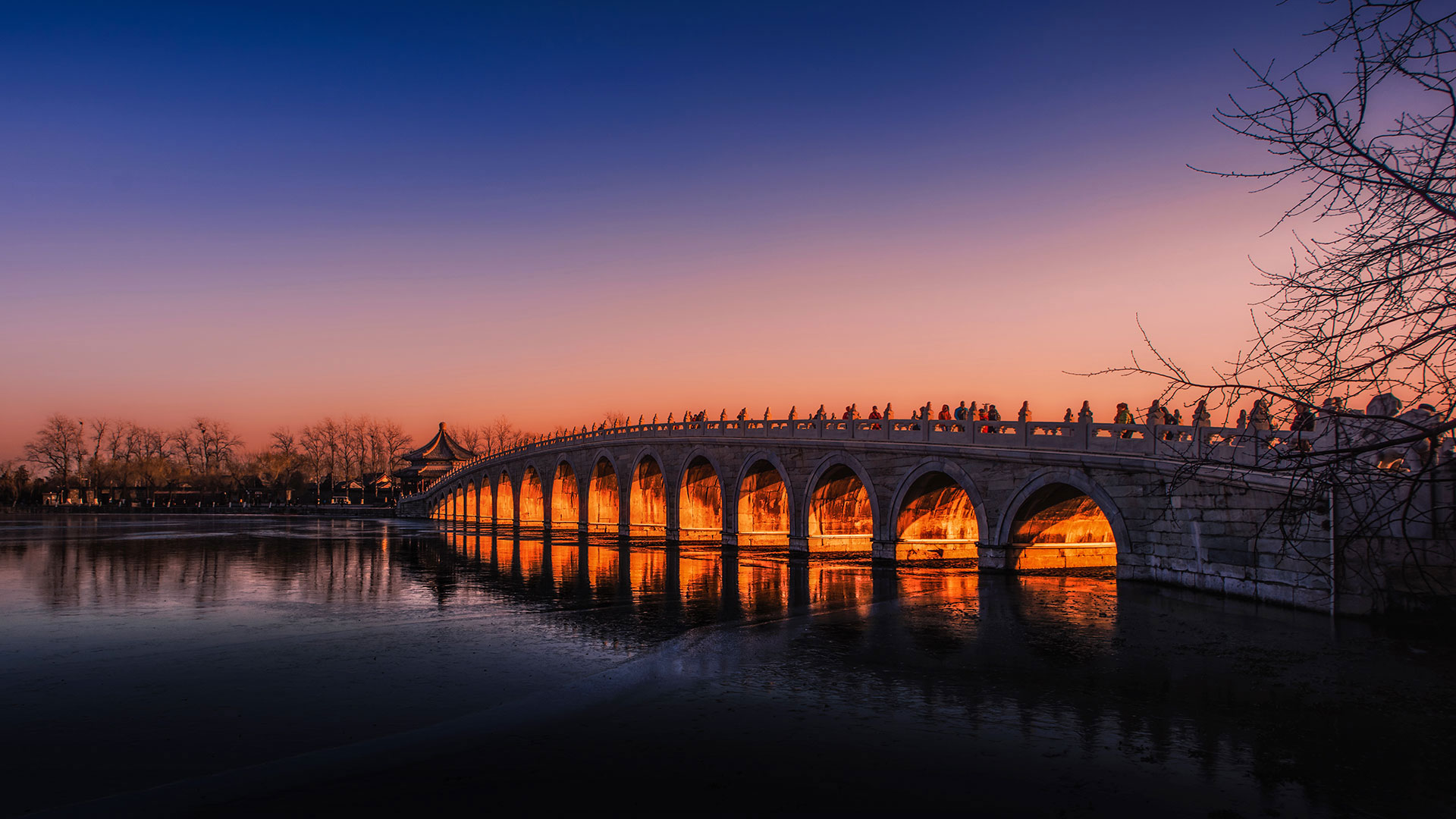 When it's winter solstice time in the Northern Hemisphere, the setting sun shines under the Seventeen-Arch Bridge of the Summer Palace in Beijing, causing this romantic glow. In the 18th century, during the reign of the Qing dynasty of China, Emperor Qianlong ordered the construction of this 1.1 square mile collection of gardens, lakes, and various structures including temples and small palaces. Today it's one of Beijing's premier attractions and will be crowded today with visitors headed to the bridge in time for sunset. 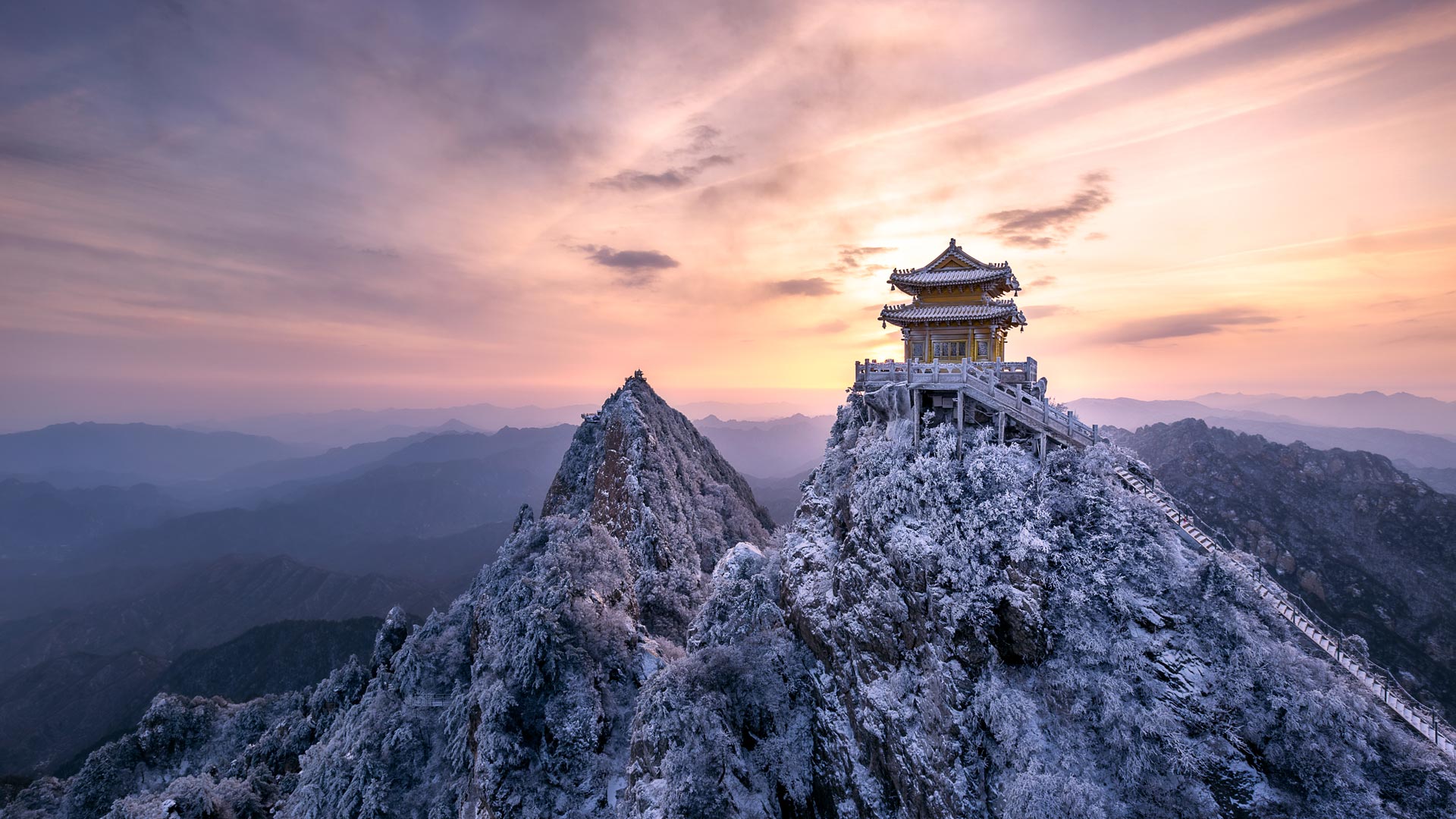 This is the Mount Laojun which was located two and a half hours south-west of Luoyang, it is one of the most popular destinations in Henan province. Laojun Mountain is a great scenery in all seasons, and only the winter snow scenery is better, Our picture show the beauty scenery of the DongZhi. If you do not feel like climbing, it’s possible to climb the gondola with a spectacular view of the region and the characteristics of the mountain: small waterfalls, green trees, rocks with original shapes … At the top from the mountain is a gilded roof pavilion attracting the majority of visitors.