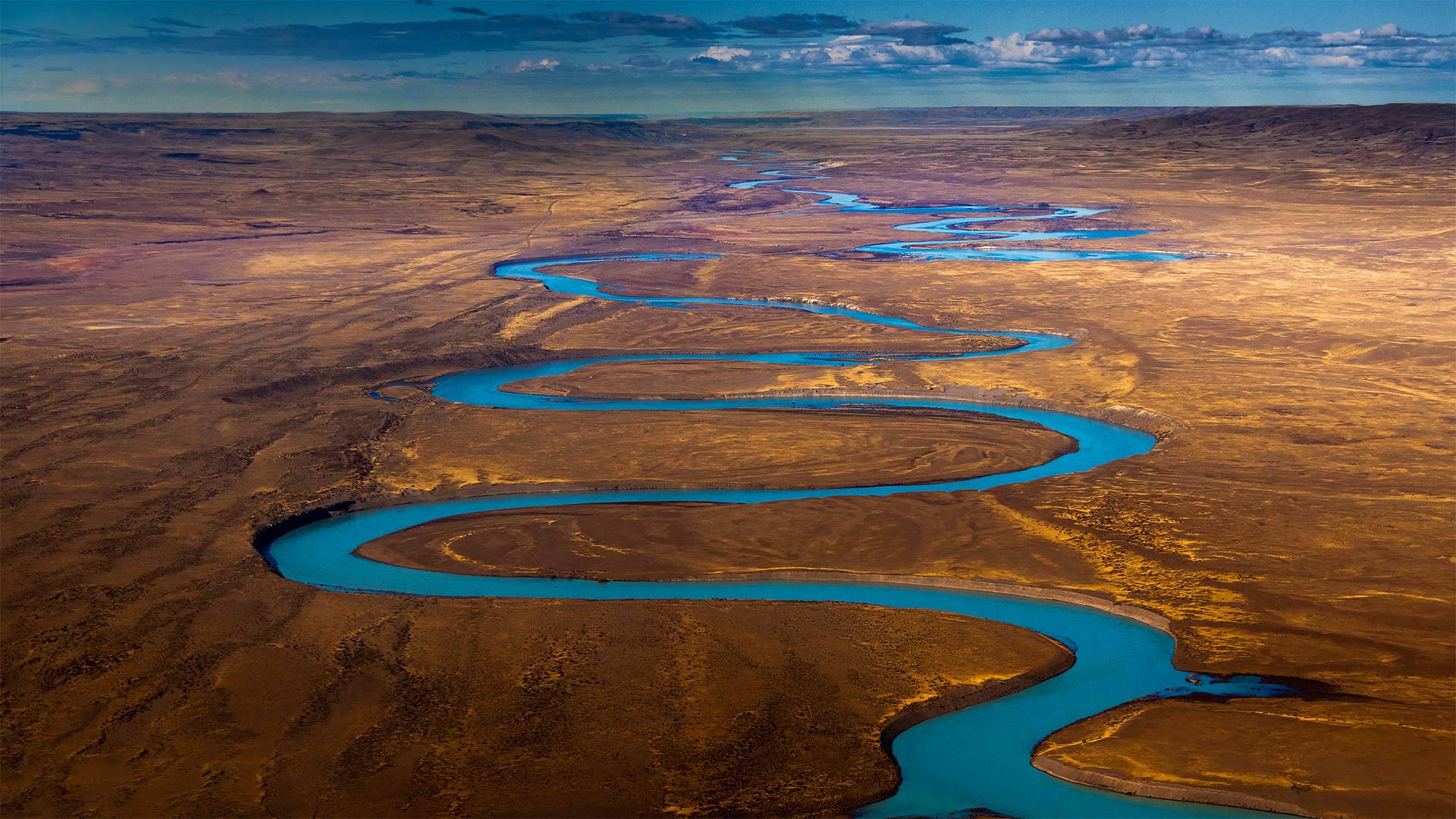 Squiggling east from the Andes mountains to the Atlantic Ocean, the mighty Santa Cruz river in Argentina's Patagonia region flows over some of South America's sparsest terrain. Over the centuries, some of history's most notable explorers have been drawn to the winding waterway: Ferdinand Magellan's 1520 expedition discovered its coastal delta, and Charles Darwin (on the same voyage that took him to the Galápagos Islands) studied the area's ecosystem during a grueling 1834 side-trip up the river. Even now, very few settlements exist along the 240-mile course of the Santa Cruz, considered the last major free-flowing river in Patagonia.

The river's many U-shaped bends, called meanders, are carved out gradually: When flow pressure isn't equal on both banks of a river, erosion tends to warp small bends into dramatic, sweeping curves over long periods of time. But the prospect of much swifter change looms over the Santa Cruz: A controversial hydroelectric dam project already underway downstream will potentially have a drastic impact on the entire river's hydrology and ecosystem. 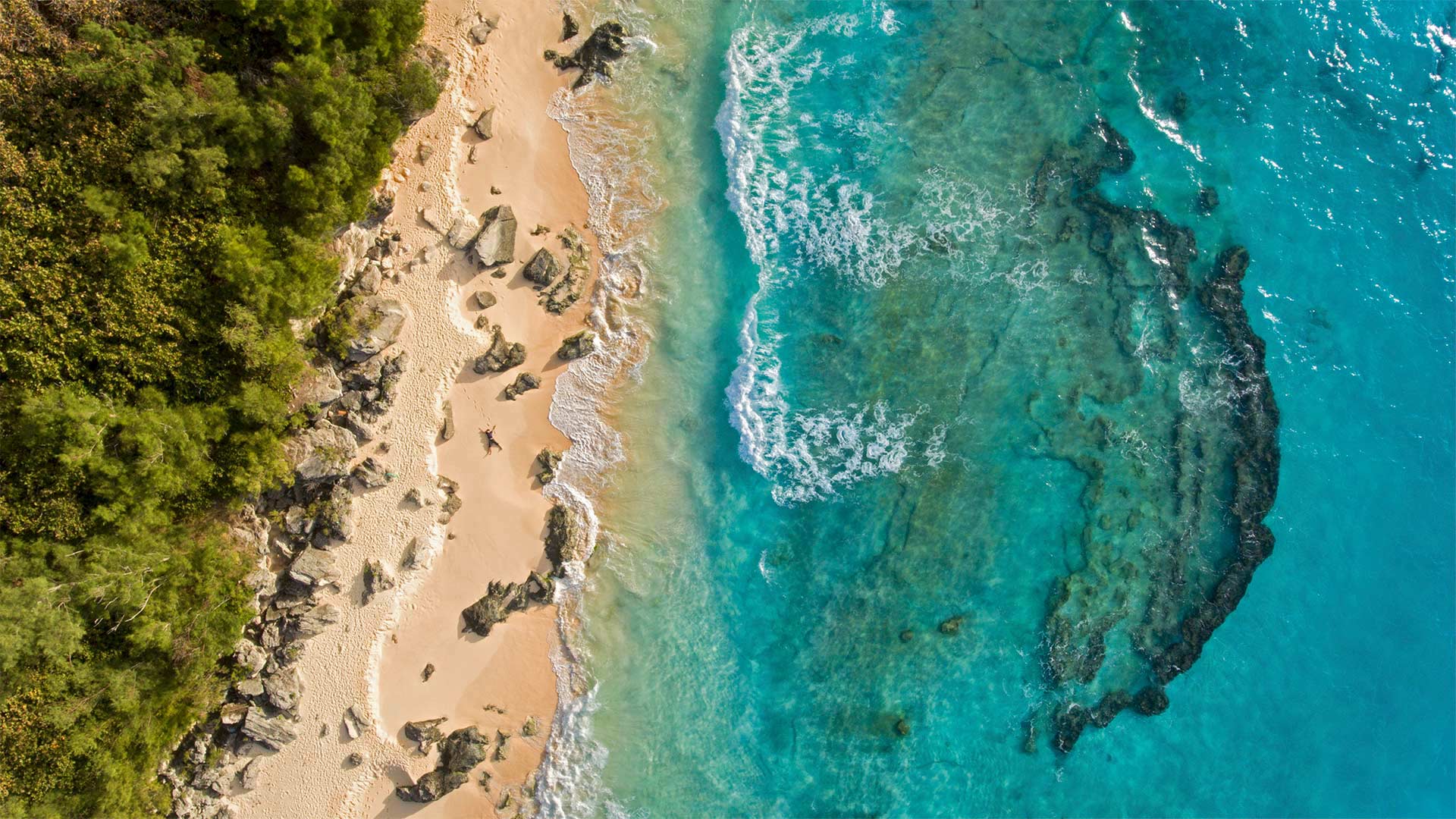 We're gazing down at Marley Beach on the southwest coast of Bermuda in honor of Bermuda Day, a public holiday celebrated near the end of May. The event was first established on this British island territory in 1902, to honor the late Queen Victoria's birthday, but it has evolved into a celebration of the culture. Since 2018, it's been observed on the last Friday of May. Locals celebrate the end of winter on this day with a swim or boat ride. Today's holiday also marks the date when islanders transition to a summer wardrobe at work. For the next several months, Bermuda shorts, which hit just above the knee, will be considered appropriate business attire for the island's most dapper gentlemen. 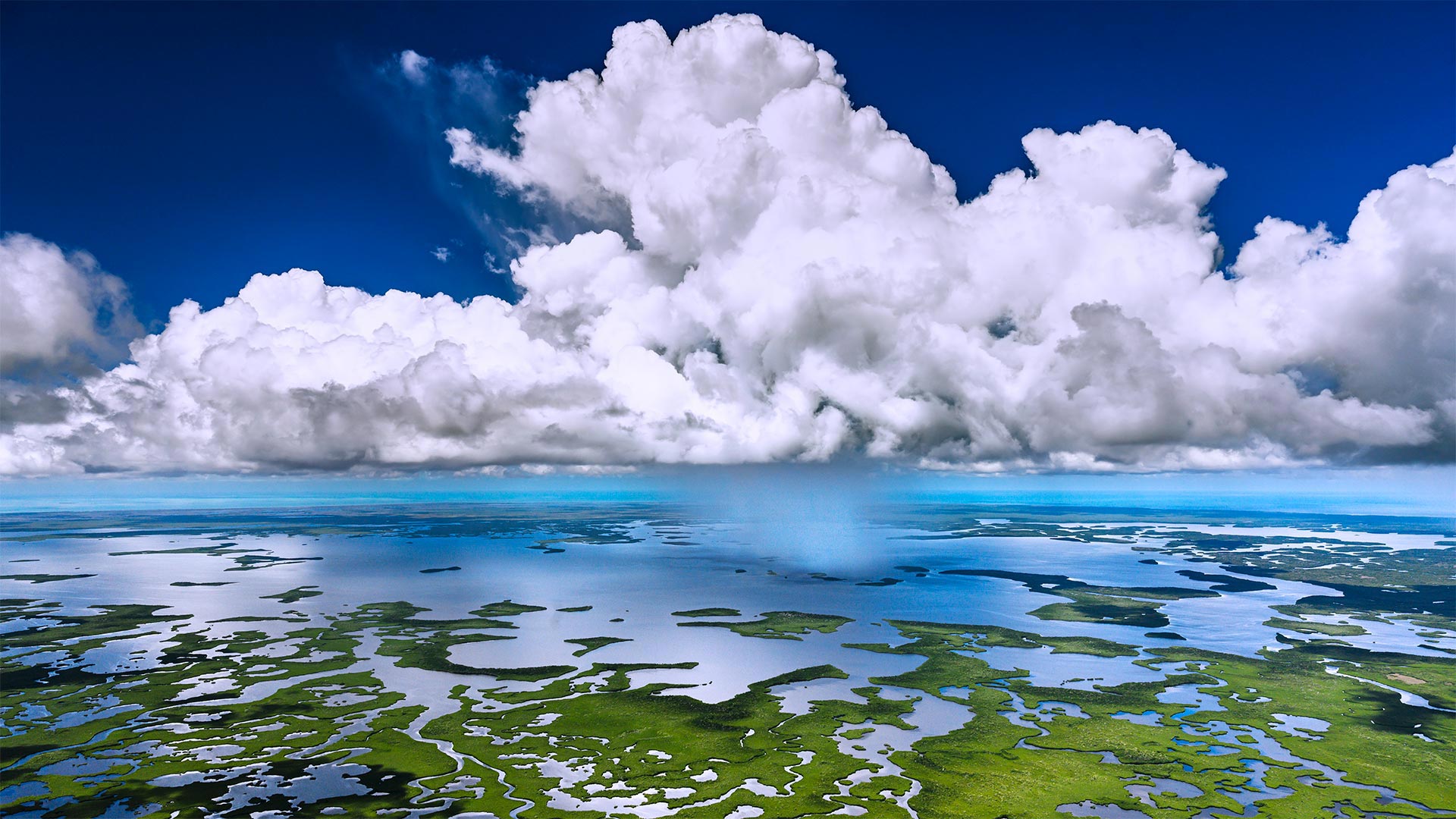 Clouds over the 'River of Grass'

It's the beginning of the wet season in the Everglades, where it's typically hot and humid from May through November. Afternoon thunderstorms are common, bringing heavy rainfalls that subside quickly. The largest subtropical wilderness in the US, the Florida Everglades is essentially a slow-moving river, 60 miles wide and over 100 miles long. The water flows during the wet season from Lake Okeechobee southward across a limestone shelf to the southern tip of the Florida Peninsula. The complex ecosystem here is not found anywhere else on the planet.

Nicknamed the 'River of Grass' by conservationist Marjory Stoneman Douglas, the Everglades are full of sawgrass marshes, cypress swamps, and mangrove forests. In the early 20th century, water flow from Lake Okeechobee was increasingly diverted to support the development of South Florida, and it became clear that the Everglades were quickly vanishing. To help protect the fragile ecosystem, Everglades National Park was established in 1934, preserving about 20 percent of the original wetlands. While rising water levels can make it challenging to spot wildlife during the wet season, it's a critical season for the birds, crocodiles, manatees, and many more beautiful creatures that call the 'River of Grass' home. 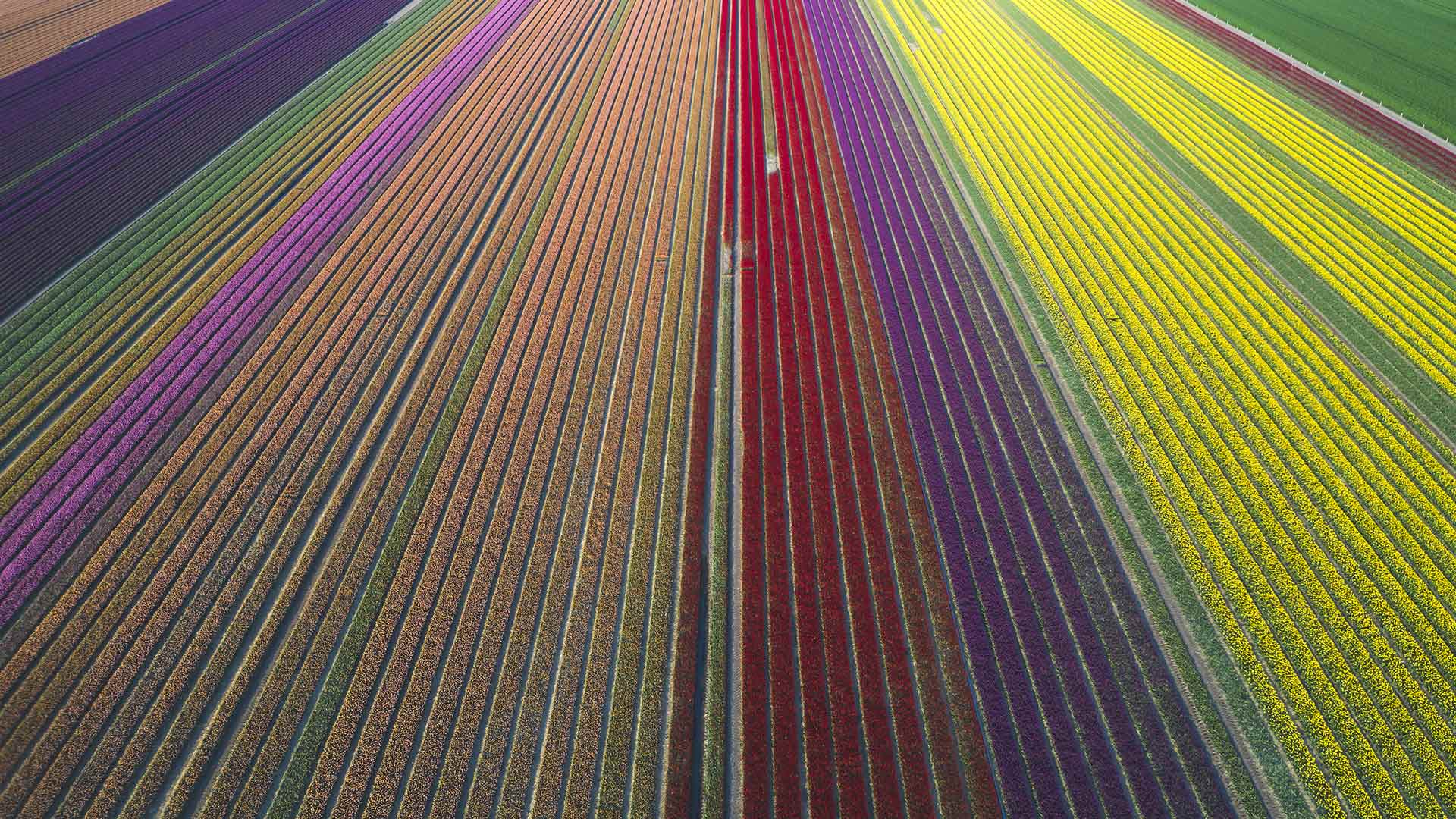 Are these tulips from Amsterdam? The Netherlands is the world's largest tulip producer with a share of over 80 percent, but our picture today shows a tulip field in Saxony-Anhalt. In this country too, the popular flowers are grown in large fields in neat rows and bright colors. 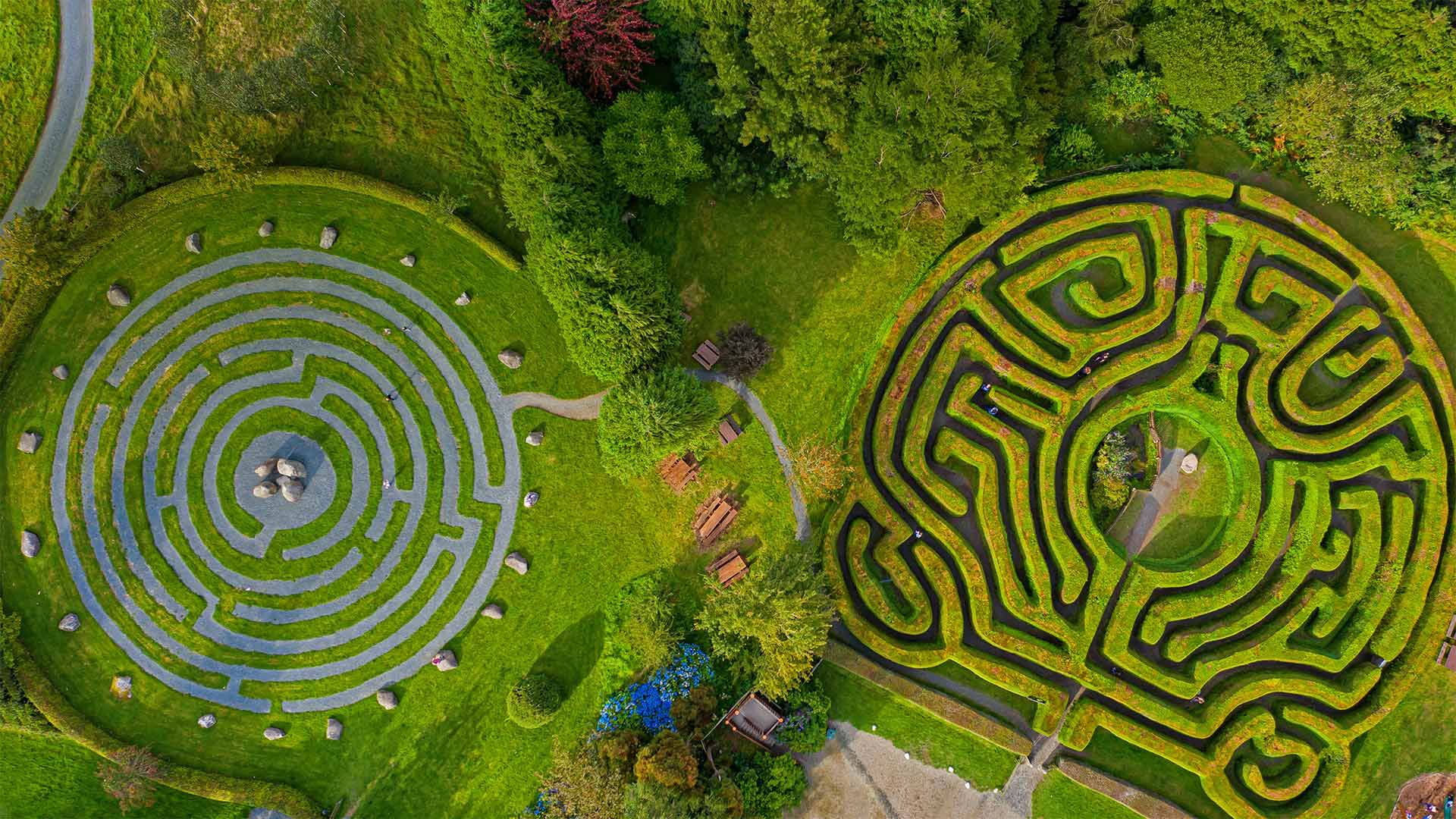 Beannachtaí ó from Greenan Maze in Ireland! (That first part is 'Welcome to' in traditional Irish.) This family farm in Greenan, a small village in the countryside of County Wicklow, has a hedge maze and a meditative labyrinth path, both in the 'celtic maze' style. Celtic mazes are a common artistic motif in artifacts from ancient Celtic settlements. Historians suggest the Celtic maze was linked to spiritual practices, often associated with the journey of the dead into the afterlife. And in modern life, they can be an inspiration for creative hedge mazes. Are you rethinking your backyard landscaping, or is that just us? 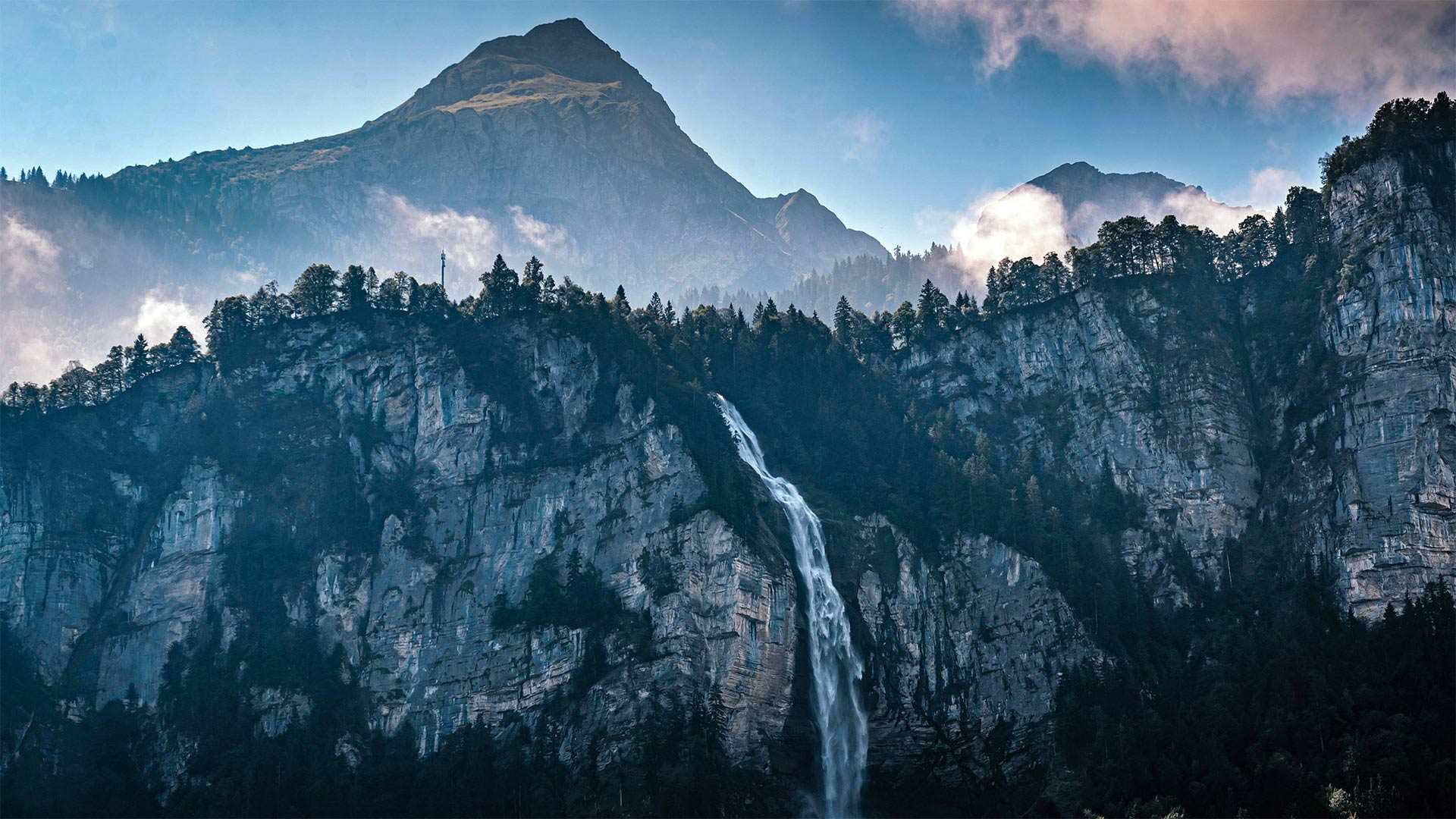 The scene of a literary crime

Remarkable enough in itself, this 800-foot mountain waterfall is also the site of one of fiction's most enduring showdowns between good and evil. Just outside Meiringen, Switzerland, the Reichenbach Falls are the backdrop for 'The Final Problem'—the 1893 Sherlock Holmes story where, on a precipice near the falls (which in the 19th century gushed with far more power than our recent image shows), the genius detective enters a death duel with the criminal Professor Moriarty. In the end, both men plummet to their presumable doom.

Though the action in 'The Final Problem' was set on May 4th, it's May 22 that's celebrated as Sherlock Holmes Day since it's author Arthur Conan Doyle's birthday. The doctor-turned-author created Holmes with 'A Study in Scarlet' in 1887 and intended to kill off his famous protagonist with 'The Final Problem' to move on with his literary life. Nonetheless, pressure from Doyle's anguished, sleuth-starved public led him to 'resurrect' Holmes (but not Moriarty) a decade later with 'The Adventure of the Empty House.' In all, Doyle issued four novels and over 50 short stories starring Holmes over four decades—and they've inspired countless other books, plays, radio dramas, movies, TV shows, comics, and video games that feature the super-sleuth. 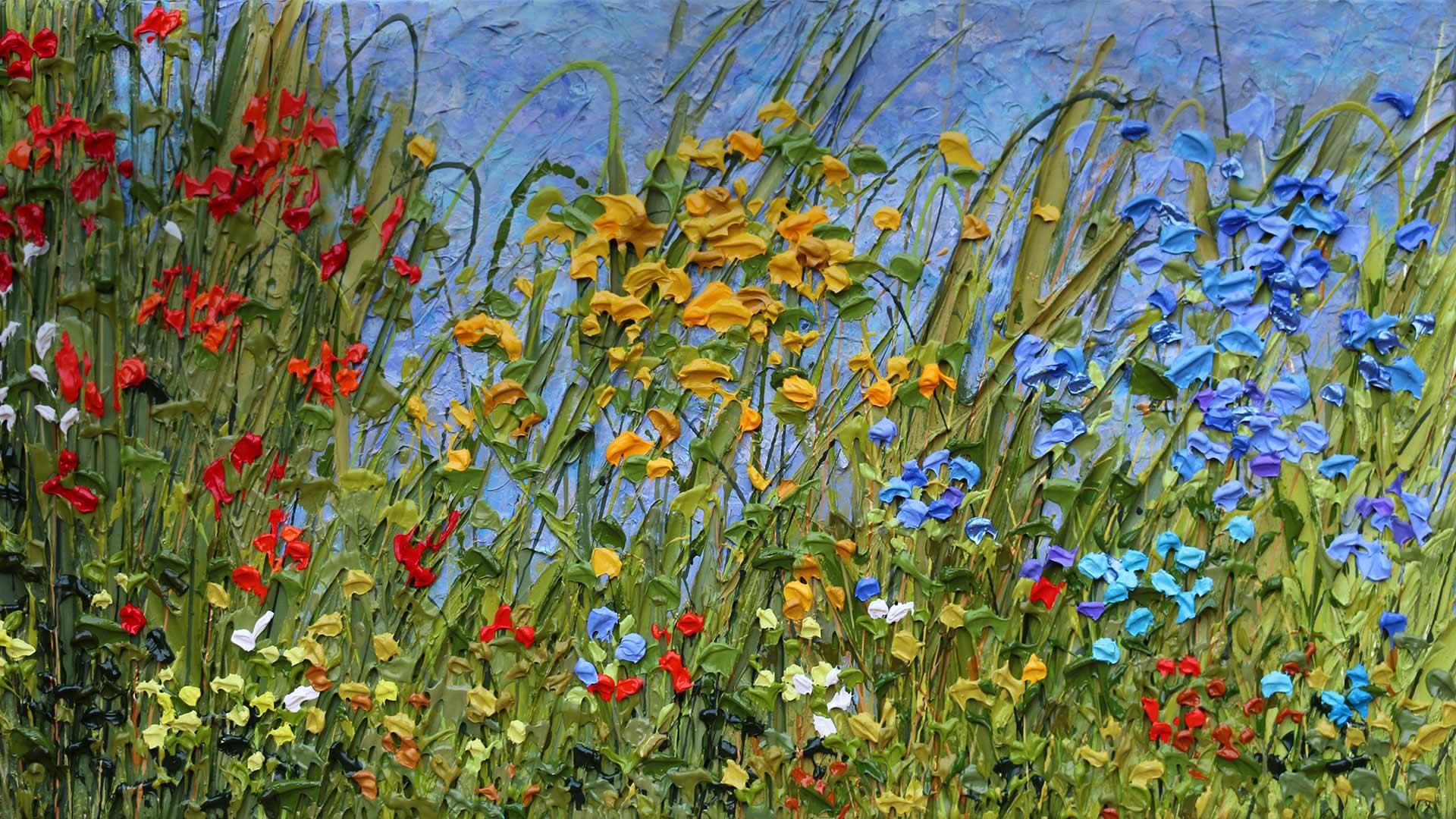 A visionary artist paints his own garden view

If you're seeing brightly colored flowers against a multihued backdrop, you're experiencing something the painter of today's Bing homepage image hasn't fully seen since he was a young boy after a brain tumor damaged his optic nerve. Today, Jeff Hanson is a successful visually impaired artist who only vaguely sees shapes and colors. Although legally blind, he's developed a unique tactile process that helps him feel his compositions by first plastering the canvas with a thick plastic goop. Once that hardens, he uses the plastic ridges to navigate a piece, lending the composition form so he can add his signature vibrant color. He playfully calls each painting 'a sight for sore eyes,' selling his art to appreciators like Warren Buffett, Elton John, and other collectors. Yet, one of the most creative aspects of Hanson's life is the way he's had to develop assistive methods to paint.

The methods Hanson uses are not unlike the wheelchairs, head pointers, closed captions, voice trackers, and a growing number of assistive technologies that empower other people with disabilities. On Global Accessibility Awareness Day, we're featuring Hanson's painting to observe the ongoing work to make technology accessible for more people around the world. (One way to appreciate this need is to take our quiz without the use of your mouse.) 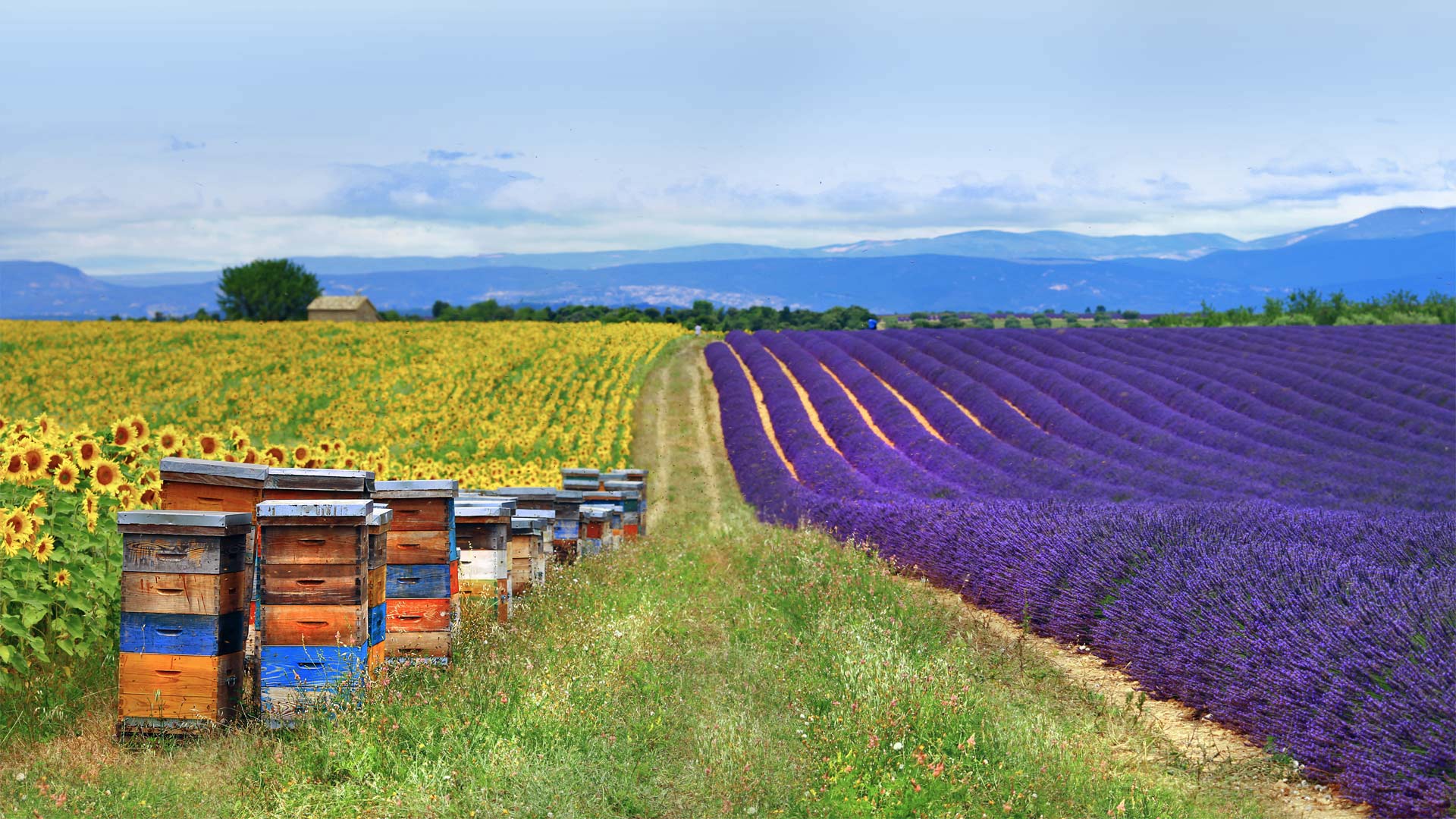 薰衣草田和蜂箱旁的向日葵地，法国普罗旺斯 Fields of lavender and sunflowers with beehives in Provence, France (© leoks/Shutterstock)

Today we've buzzed to Provence, France, to enjoy this scenic view brought to you by bees. These hard-working insects are key pollinators of flowers, like the nectar-rich lavender seen growing here. Bees are also critical for the pollination of fruits and vegetables—about a third of the food we eat is a result of honeybee pollination. In the US, honeybees, whether tended by beekeepers or living in the wild, pollinate about $20 billion worth of crops every year. That's a lot of gold—and doesn't even include their delicious honey. So today, on World Bee Day, we invite you to stop and smell the flowers and give a nod to the bees that help color our world. 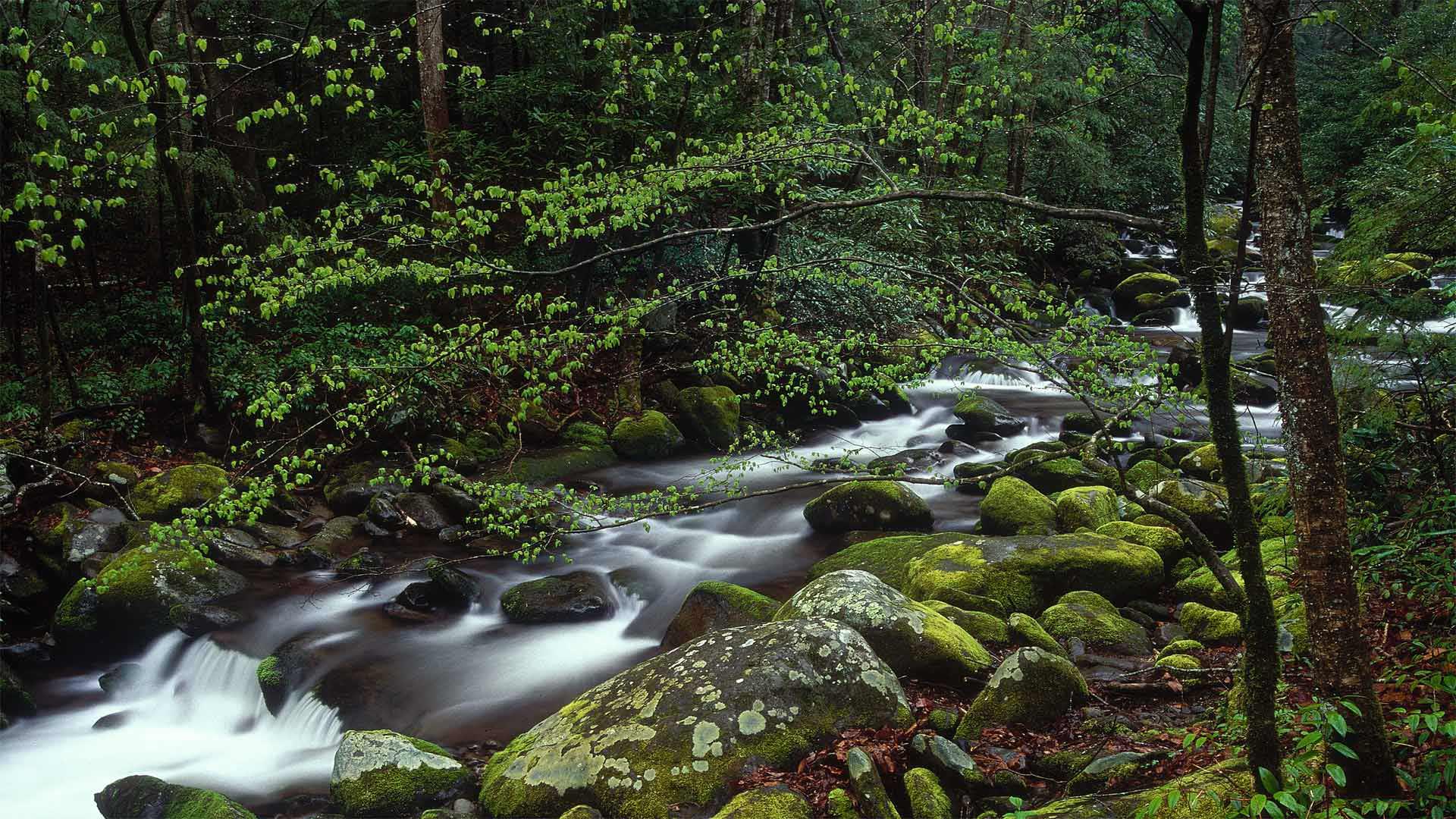 Roaring Fork may seem like a misnomer for this mountain stream in Great Smoky Mountains National Park. During dry spells, it's an idyllic mountain stream. But Roaring Fork descends 2,500 feet over just two miles—a steep drop down Mount Le Conte. When heavy rains swell the stream, Roaring Fork transforms into a whitewater rush, with the sound of the surging water echoing off the sandstone walls of the mountain. 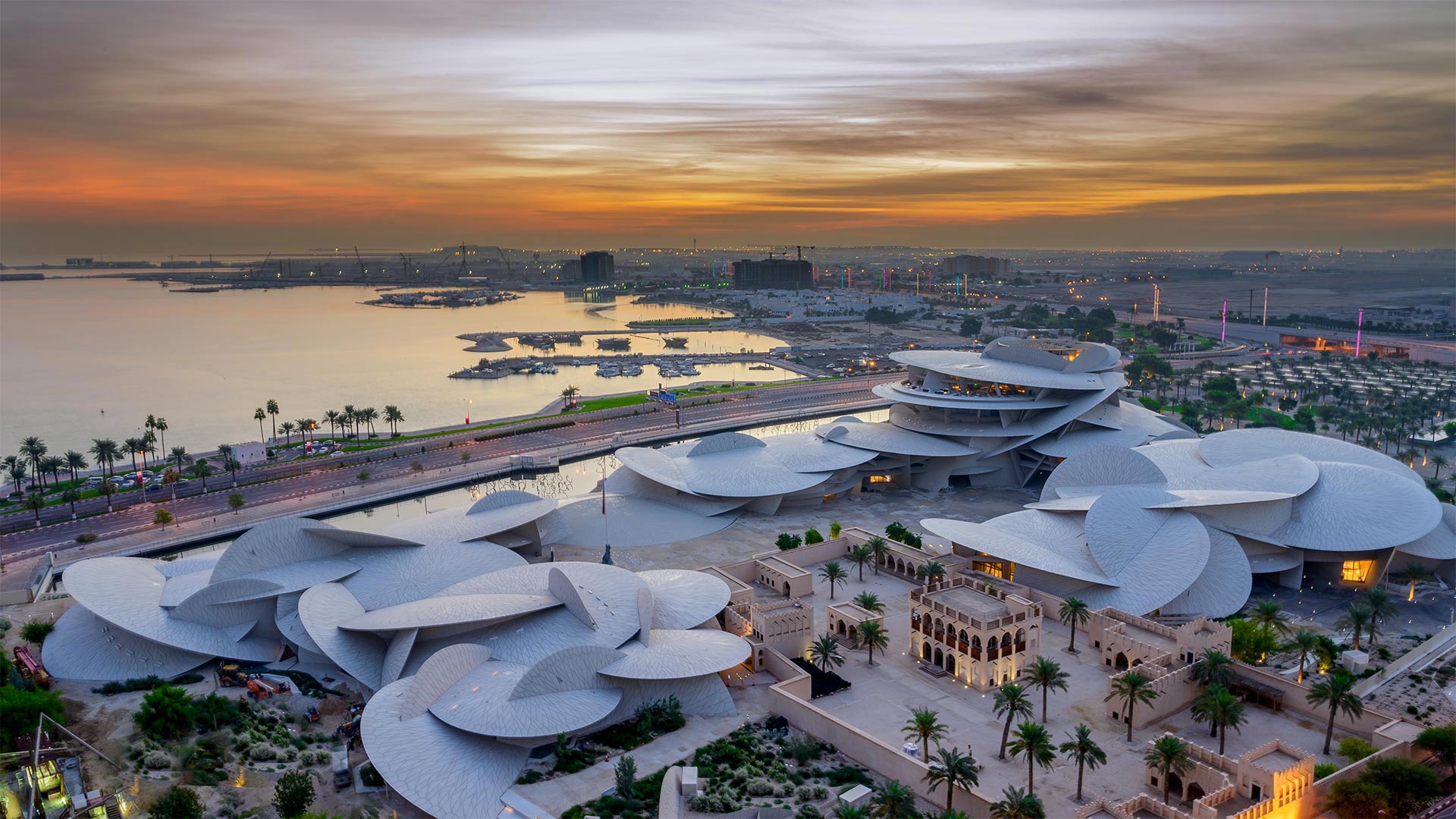 International Museum Day brings us to Qatar, a small but wealthy nation on the Arabian Peninsula, surrounded by the waters of the Persian Gulf and bordered by Saudi Arabia to the south. In the capital city of Doha you'll find its National Museum, shown here, which opened in March of 2019. This elaborate building was designed by Pritzker Prize-winning architect Jean Nouvel, who sourced his inspiration from the desert rose crystal. Look closely and amid the futuristic interlocking disks of the new museum you'll see the early 20th-century Old Amiri Palace, once home of the Emir of Qatar, surrounded by a courtyard of palm trees.