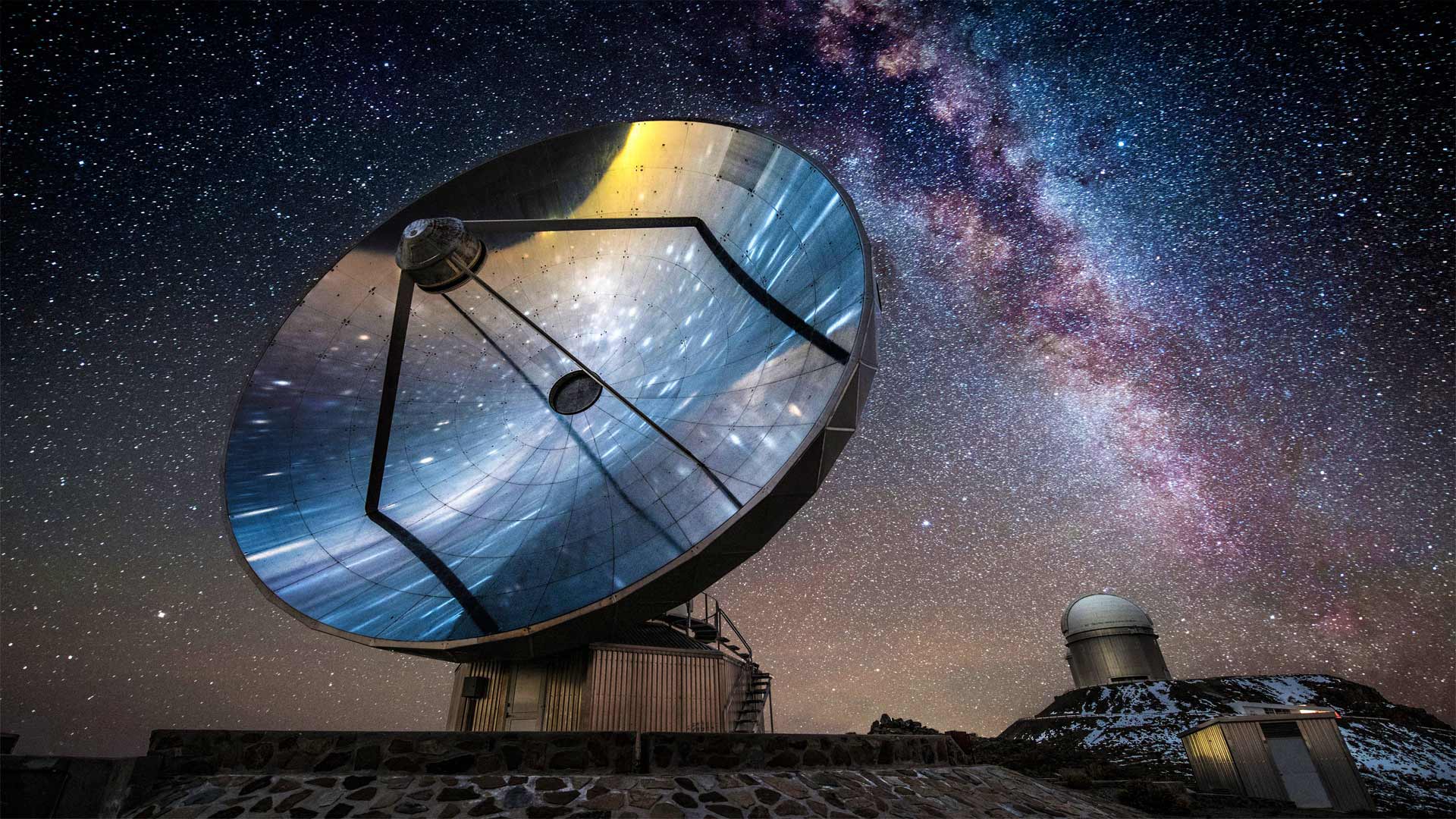 仰望夜空 Eyes on the skies

In one of the darkest places on Earth there's a cluster of telescopes that examine the heavens each night, sending detailed information about the celestial bodies they observe to astronomers across the planet. Far from any population centers or light pollution, the Atacama Desert is the world's driest nonpolar desert. It's the perfect place for La Silla Observatory, one of the largest observatories in the Southern Hemisphere, and the first to be used by the European Southern Observatory (ESO), a research organization made up of astronomers from 16 European nations. The first ESO telescope at the La Silla site in Chile began operating in 1966.

And what better place to spend World Astronomy Day? Started in 1973 by Doug Berger, the president of the Astronomical Association of Northern California, Berger's initial intent was to set up various telescopes in busy urban locations so that passersby could enjoy views of the heavens. Since then, the event has expanded and is now sponsored by several organizations associated with astronomy. The springtime Astronomy Day is mirrored by another in the fall between mid-September and mid-October. 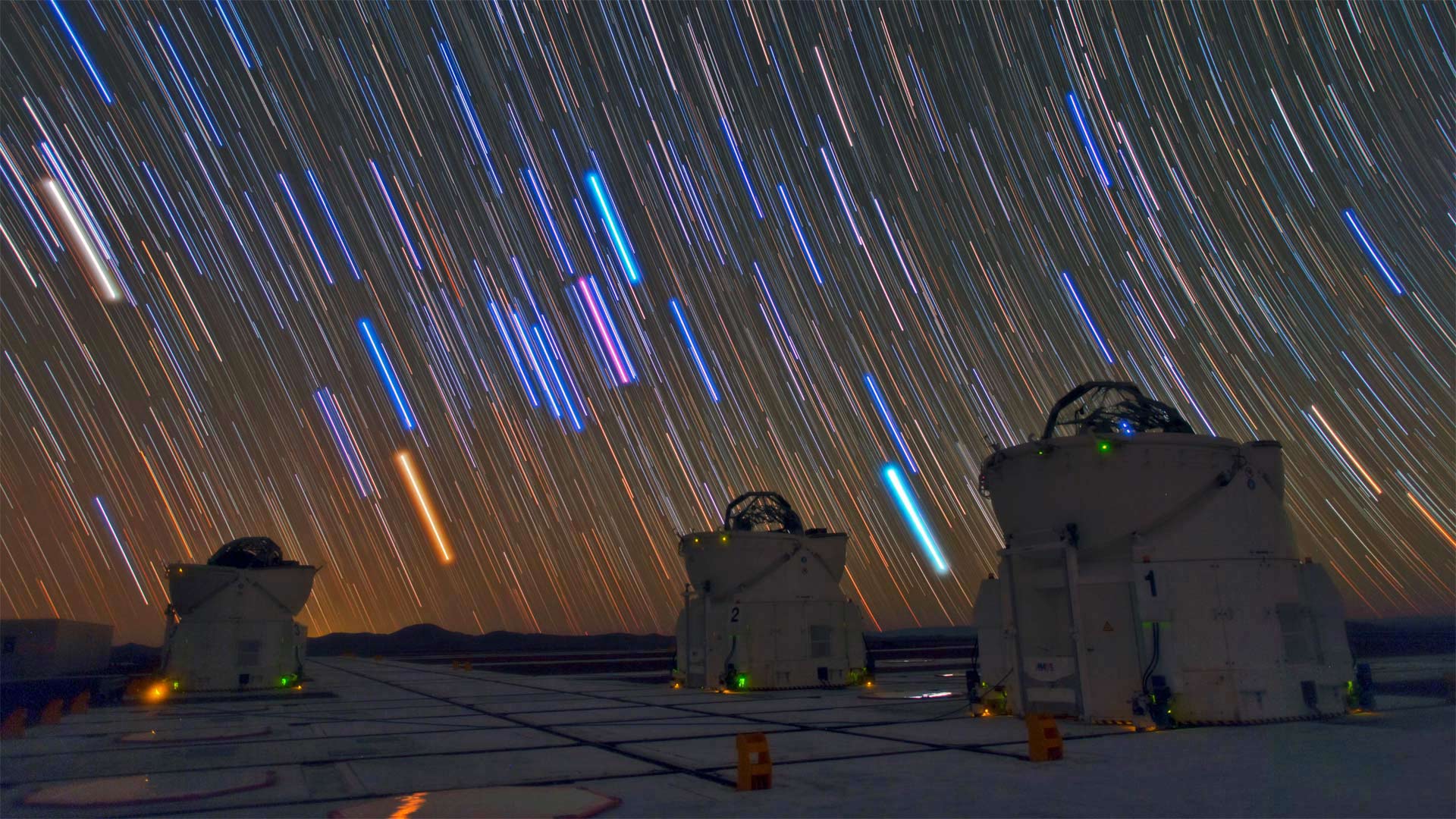 No, that's not a downpour of lightsabers—but it's no typical night sky either. Stargazing here at Paranal Observatory, on a mountaintop in Chile's desolate Atacama Desert, you'll get one of the clearest possible naked-eye views of the southern skies. This 'lightsaber' effect comes from the photo's long exposure: What we're seeing is these stars' paths as they track across the night sky due to our planet's rotation. The dazzling colors indicate temperature, from chilly red (5,000-ish degrees Fahrenheit) to balmy blue (temps in the tens of thousands).

What about those structures beneath the starry sky? They're three of the eight telescopes making up the Very Large Telescope, an aptly named project of the European Southern Observatory. Together the telescopes compose photographs of astronomically fine focus: If you were to drive a car on the surface of the moon (which we don't advise trying), the VLT could snap a crystal-clear shot of your headlights. 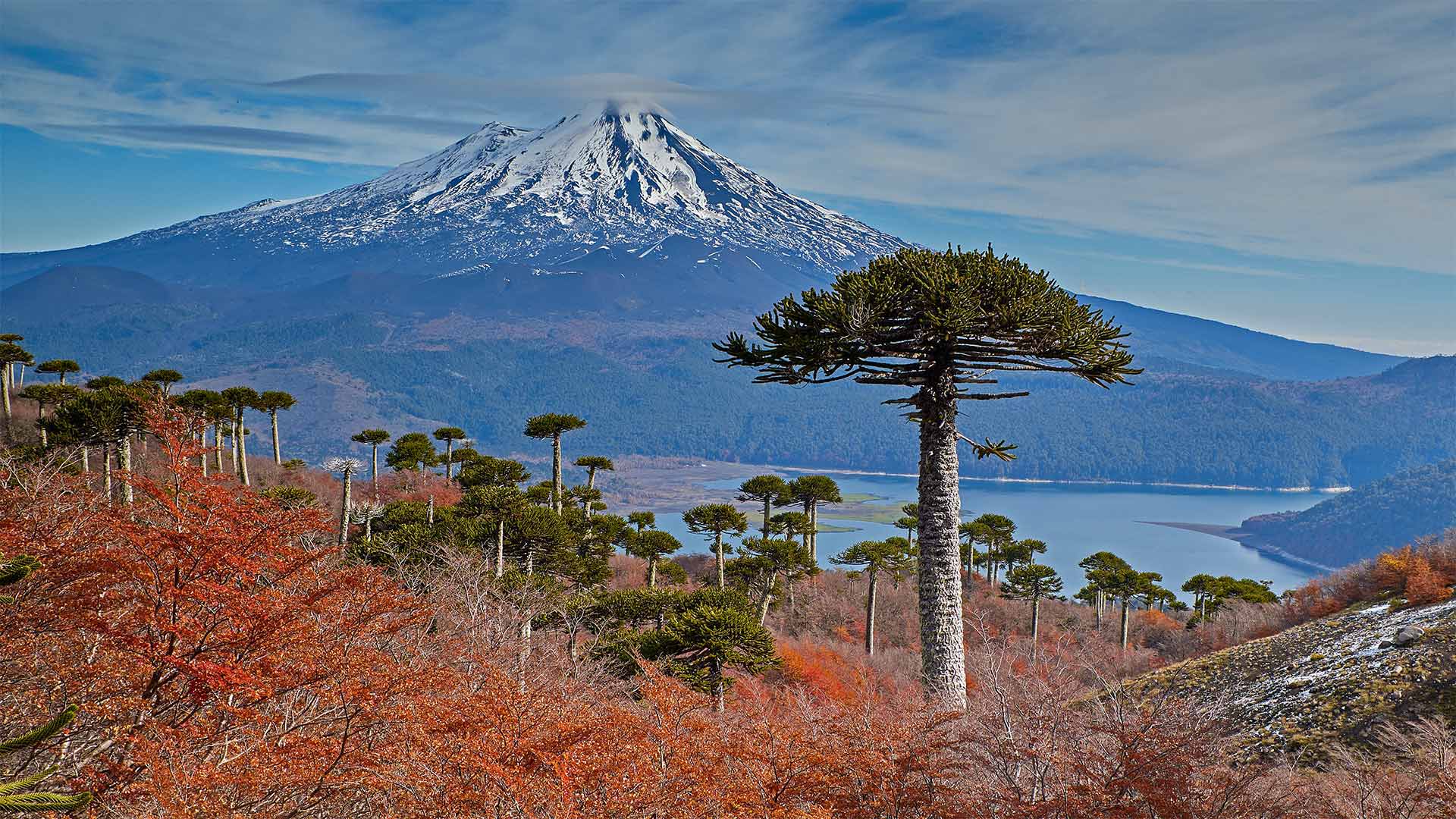 Autumn in Chile varies widely as one travels from the Atacama Desert in the north more than 2,600 miles south to the tip of Tierra del Fuego. Around halfway between these two extremes you can find Conguillío National Park and the volcano Llaima at Chile's center. In March, at the start of the Southern Hemisphere's autumn, the leaves of the deciduous forest begin to turn color and fall, and the native Chilean pine trees (Araucarias) stand out even more strikingly.

Because of their distinctive appearance and the fact that they thrive in a wide range of climates, the trees became a favorite of botanists in the 19th century, who transported and cultivated them in many temperate climates around the world. The 'monkey puzzle' trees got their common English name in the 1850s when English barrister Charles Austin observed that 'It would be a puzzle for a monkey to climb that.' Even more amazing is that these trees can live over a thousand years and are themselves living fossils, descended from a lineage stretching back 260 million years to the time of the dinosaurs. 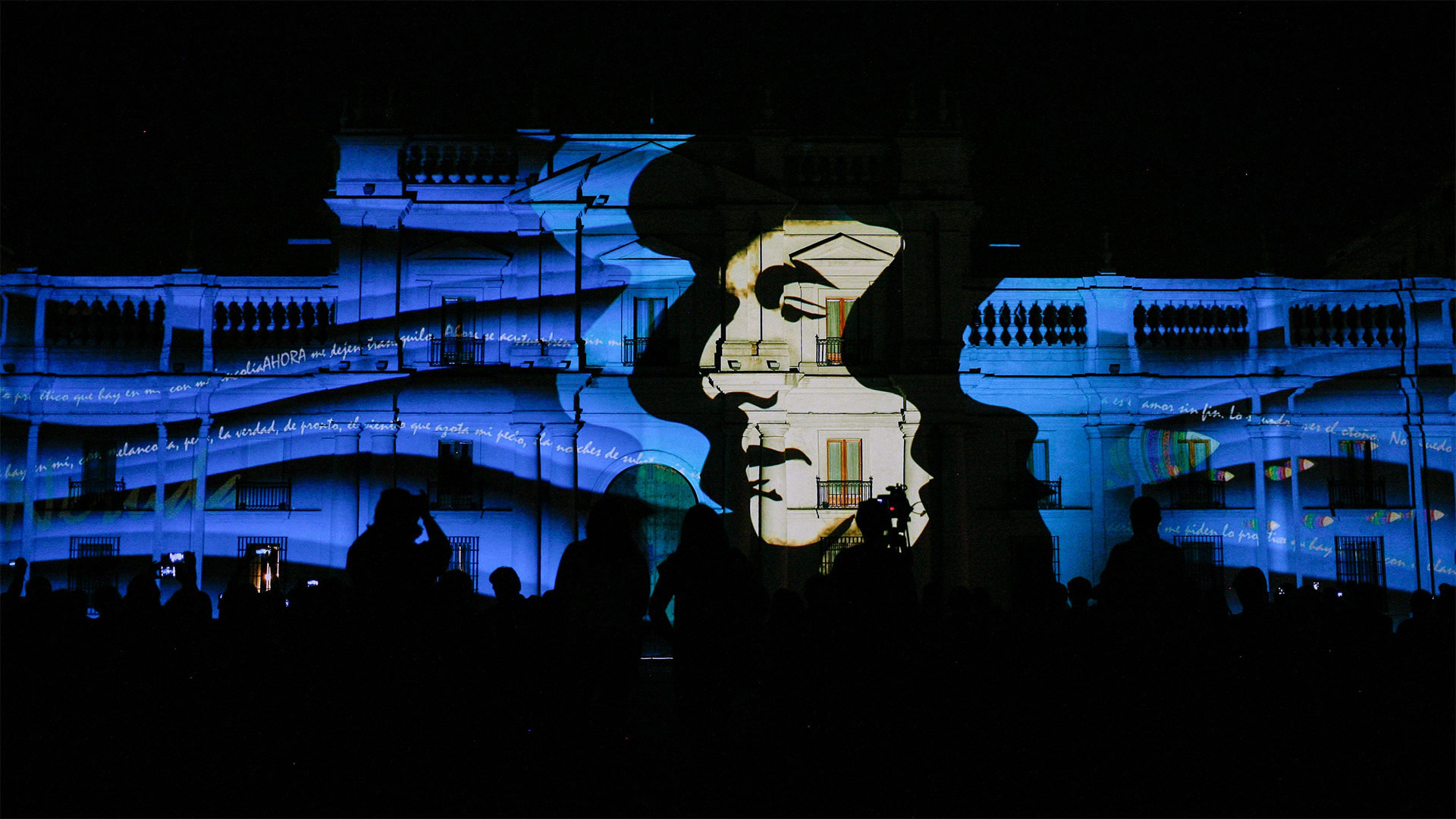 For World Poetry Day, we're seeing the stylized visage of poet Pablo Neruda projected on a building in his native Chile. World Poetry Day was established by UNESCO to acknowledge 'that individuals, everywhere in the world, share the same questions and feelings.' Neruda, a Nobel laureate generally held up by Chileans as their national poet, made his early mark with famously racy love poetry. But his palette of questions and feelings evolved, expanding into surrealism, epic history, and radical politics. His death in 1973 after a bout with cancer was mourned publicly by Chileans—in defiance of newly installed dictator Augusto Pinochet, whom many Chileans link to Neruda's untimely passing.

For World Poetry Day, UNESCO encourages embracing the tradition of reciting poetry for an audience—so keep your eyes peeled for poetry slams and other gatherings of language lovers sure to take place around the world today. Care to prepare? Brush up on your poetry knowledge with today's quiz. 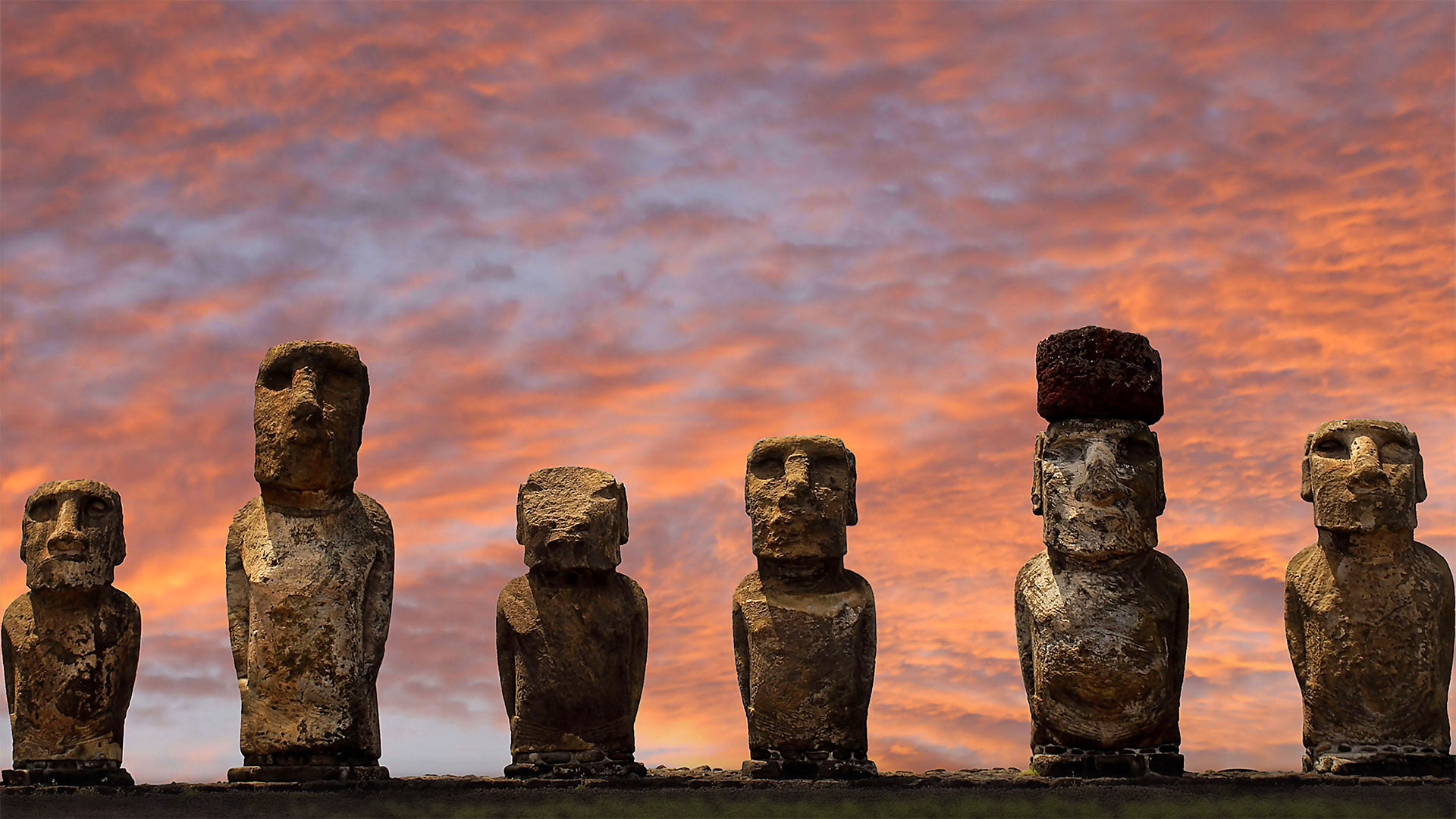 The 'moai' you know

Roam around the tiny, remote Easter Island and you'll find almost 900 of the stern stone faces called moai. They seem ancient as the pyramids, even a little alien, but they were actually sculpted between 500 and 800 years ago from compacted volcanic ash that's as terrestrial as it comes. You're seeing six of the 15 moai that stand on Ahu Tongariki, the largest ahu (stone platform) on the island. These statues were toppled in the 18th or 19th century along with other moai island-wide for reasons not fully known to scholars, though earthquakes or possible tribal infighting are postulated. The statues were later buried by a tidal wave and lay in ruins until the 1990s when they were excavated and placed back on the ahu.

Though scholars still debate how and why the moai were constructed and moved into place, it's known that they represent the ancestors of the Rapa Nui, an isolated and hardy culture that still celebrates its uniqueness. Visit Easter Island during the first two weeks of February and you'll find yourself in the midst of Tapati Rapa Nui, a festival that revives islander ceremonies of song and dance, as well as sporting events like ocean canoeing, horse racing, and haka pei (high-speed sledding on banana tree trunks). 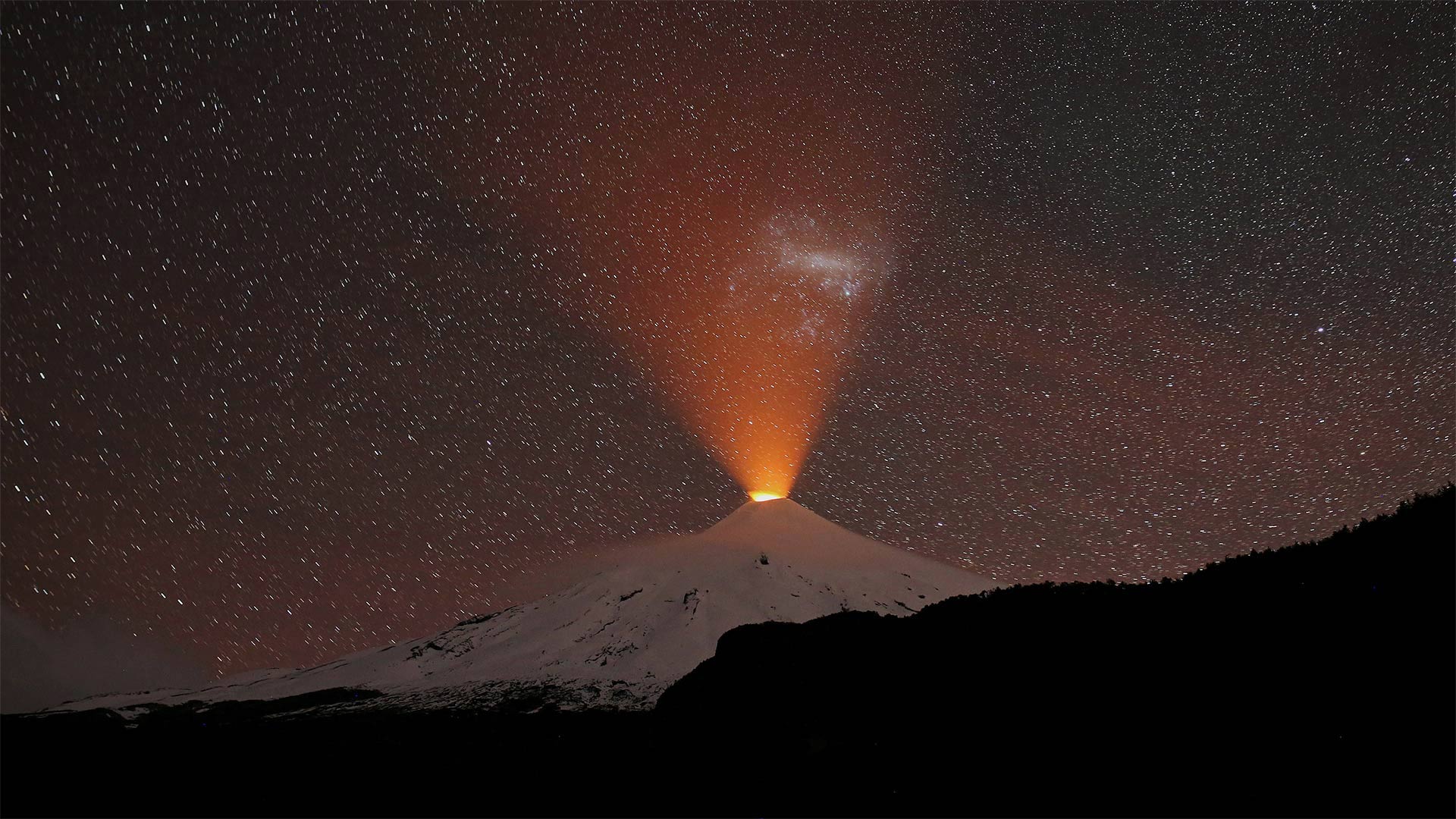 The Villarrica volcano in Chile on September 2, 2018 (© Cristobal Saavedra Escobar/Reuters)

That's the Villarrica volcano providing fireworks for our observance of Chile's Independence Day celebrations—called Fiestas Patrias—taking place September 18 and 19. The second-most active volcano in South America, Villarrica is known to the indigenous Mapuche people as Rucapillán (Devil's House). This photo was taken on September 2, 2018, alarming nearby residents, but it wasn't nearly as destructive as other relatively recent eruptions, like one in 2015 that prompted authorities to evacuate thousands of people.

Chile's Fiestas Patrias take place each year just before the spring equinox in the Southern Hemisphere, so the Independence Day celebrations double as a kind of spring festival. With most schools and workplaces on a weeklong vacation, people observe the holiday by attending rodeos, going to the beach, visiting family, and—above all—indulging in traditional Chilean food and drink. It's said that Chileans gain 10 pound or more during the Fiestas Patrias. Most gorge themselves on empanadas de pino, which are small pastries filled with minced meat, sautéed onions, hard-boiled egg, olives, and sometimes raisins. The empanadas are typically eaten with a variety of grilled meats from barbecue stands called asados. It's all washed down with local red wine or chicha, which in Chile is a sweet, distilled grape- or apple-based beverage that is almost exclusively drunk during the week of Fiestas Patrias celebrations. 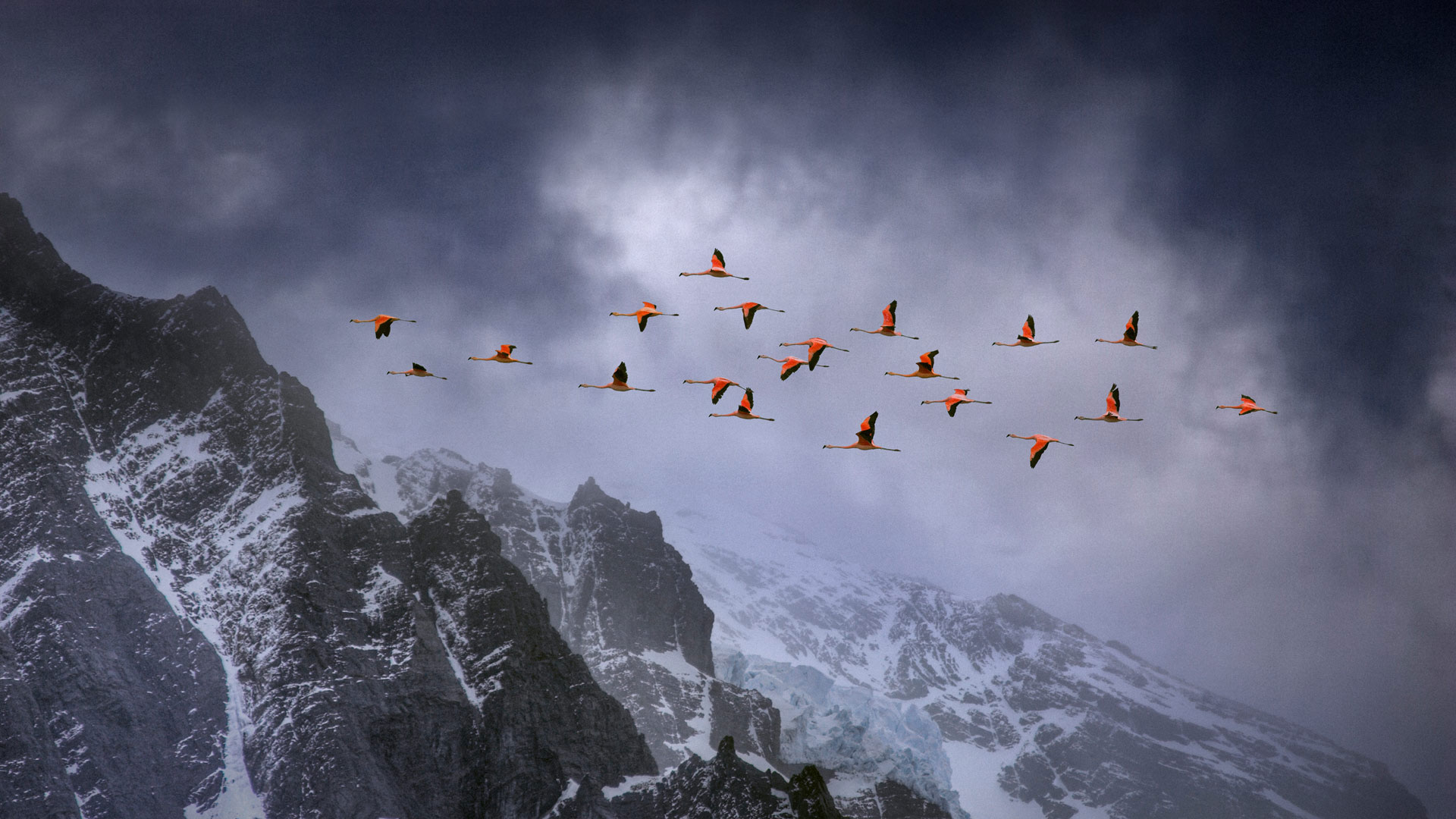 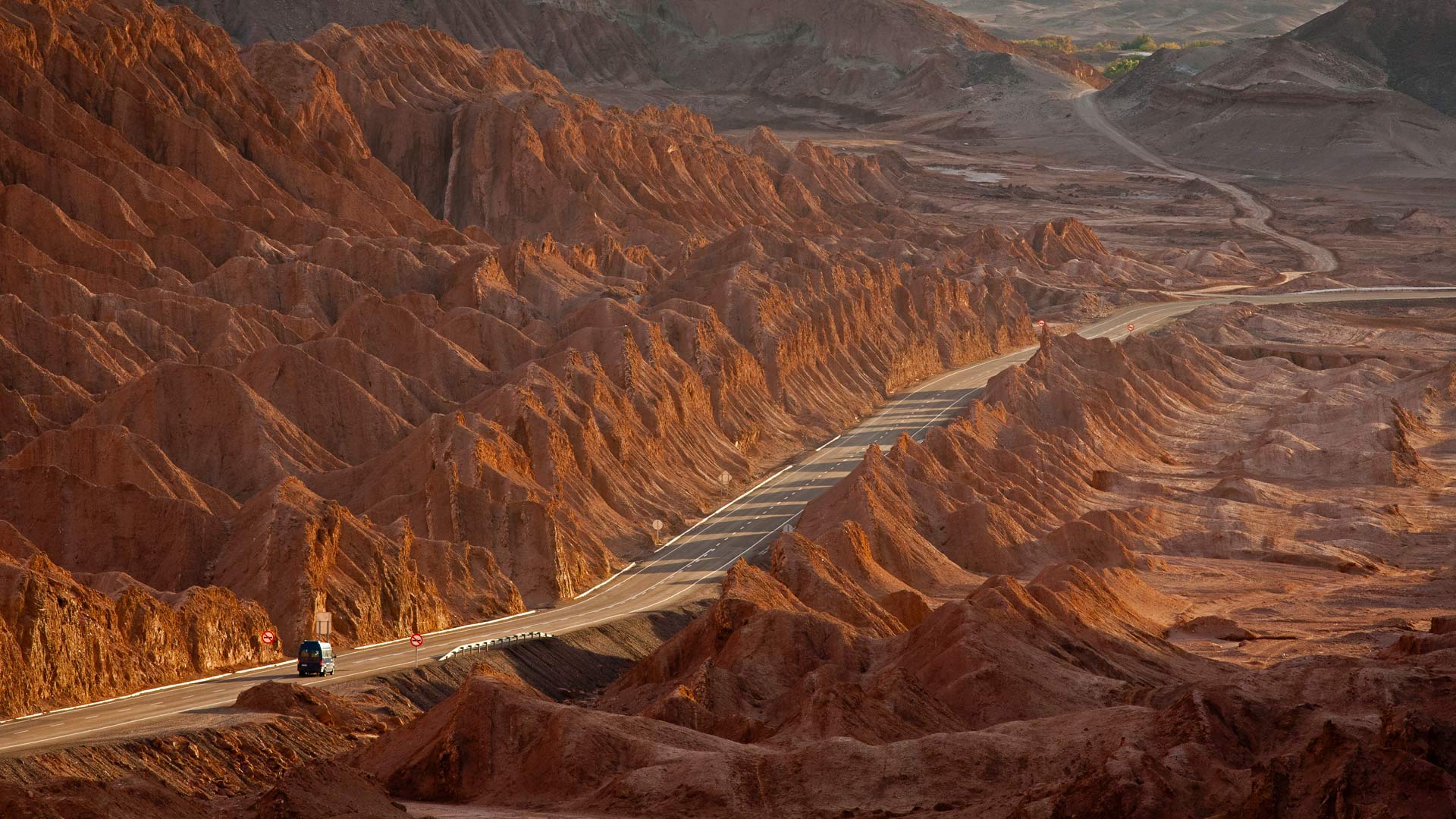